‘The X-Files’ Miniseries Episode 3: A Hilarious Return to Form

If you weren’t a fan of The X-Files when it originally aired, it’s difficult to understand the joy that the miniseries’ third hour put into the hearts of those who were. But after the first two episodes of the reboot, there was a nagging feeling among many of us that something wasn’t exactly quite right. The chemistry was close, but sometimes stiff. The new storylines were ambitious, but maybe too involved. Even though the second episode was a big improvement over the premiere, there was the sense that it just wasn’t the same X-Files.

That feeling was completely gone by the time the credits rolled on last night’s episode, “Mulder and Scully Meet the Were-Monster.” Because the hour-long episode, which wove tons of easter eggs for devoted fans into an often hilarious and incredibly weird monster-of-the-week caper, was as close to perfection as The X-Files has gotten in a long time. 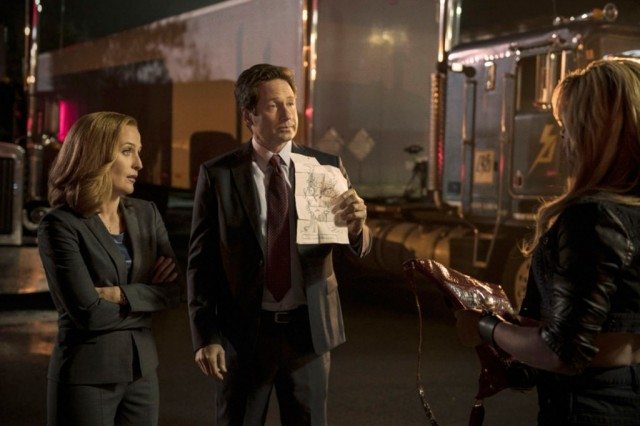 The third episode of the reboot, which many fans consider the series’ 10th season, begins with Fox Mulder (David Duchovny) in the midst of an existential funk. He’s throwing pencils around the basement office he shares with Dana Scully (Gillian Anderson) and wondering if his life of chasing creatures and government conspiracies will amount to anything. He has no idea what to believe. And he’s really annoying Scully, who’s sick of him throwing pencils at her stuff.

Then, Mulder and Scully are assigned to track down a man-eating, unexplained beast — and they’re given a chance to fully fall into their skeptic/believer dynamic — which both characters seem to deeply enjoy. What they encounter is more than they bargained for — both a harmless but totally real monster, played by the perfectly cast comedian Rhys Darby, and an animal control officer/super evil serial killer, played by actor and X-Files superfan Kumail Nanjiani. It turns out the real bad guy bit the guy they thought was the bad guy, which led to unexpected side effects — like him feeling and eventually looking human.

By the end of the episode, Mulder’s helping the pointy green creature come to grips with the monotony of human existence. But, in the course of his latest adventure with Scully, Mulder also realizes that his work on the X-Files does have a purpose — and he leaves his new friend, who’s named himself Guy Mann (seriously), with a reinvigorated enthusiasm for the paranormal. 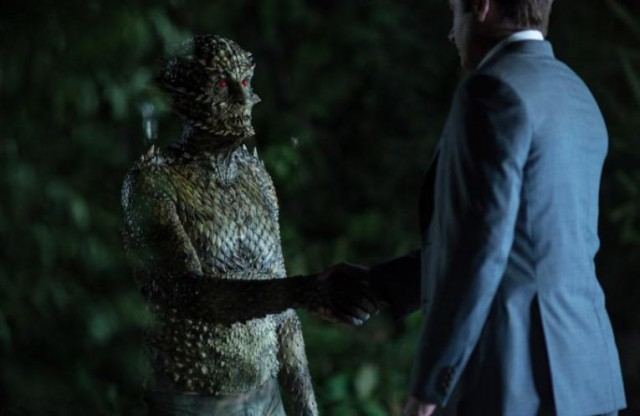 “Mulder & Scully Meet the Were-Monster” isn’t a successful episode because its plot is particularly groundbreaking. Veteran X-Files writer-director Darin Morgan imbues the entire episode with call backs to the series during its best moments. The pacing is near-perfect and the dialogue especially humorous given the episode’s tone. But the third episode of The X-Files reboot is also full of effective meta humor and littered with winks and nods to fans of seasons past. It brings back previously seen characters and we learn that Mulder’s cell phone ringtone sounds suspiciously like the TV show’s theme.

And the hour is all the more enjoyable because the cast and crew were clearly having a blast. Anderson and Duchovny, at times, have felt a bit stilted in their interactions with each other in the miniseries thus far — though anything from the heavy burden of exposition in the premiere to the often dark subject matter of last week’s episode could have played a role in that. But during last night’s episode, they genuinely felt like Mulder and Scully again — bantering, disagreeing, and teaming up to solve the case. While it didn’t do much to set up what seems to be the main arc of the series, it did wonders in terms of setting the miniseries on track as far as tone and pacing are concerned. And that should help fans stay invested as that story continues to evolve in later episodes.

At one point in the episode, Scully tells Mulder that she forgot how much fun working X-Files cases could be. After an episode like this, it will be hard for fans to forget how much fun The X-Files is when it hits the mark.