‘The X-Files’ Miniseries Episode 6: A Conspiracy of Mad Men

Spoilers ahead for The X-Files miniseries season finale!

Over the course of the last six episodes of The X-Files miniseries, we’ve laughed, been completely freaked out, and renewed our belief in a vast conspiracy of men. But it wouldn’t truly be The X-Files without at least one major “WTF” moments — and we definitely got it with “My Struggle II,” the gripping if a bit frustrating finale, directed by the series’ creator Chris Carter.

It begins as the first episode did, with a photo montage — this time narrated by Dana Scully (Gillian Anderson). It serves as a crash course in her work with the FBI, her professional relationship with Fox Mulder (David Duchovny), her abduction, subsequent illness and cure, and her growing recognition of a “conspiracy of men” regarding secrets about scientific secrets. And, she reminds us, she recently learned that she has alien DNA.

Scully arrives at the basement X-Files office to find it empty — but Mulder’s laptop open to a video clip of Tad O’Malley (Joel McHale), the conspiracy blogger that disappeared in the final moments of the season’s premiere. He’s making some bold claims — primarily, that everyone has alien DNA.  Which seems pretty plausible to Scully, given her recent discovery.

O’Malley meets Scully at Mulder’s home, where she finds out he’s disappeared. Scully enlists Agent Einstein (Lauren Ambrose) to help confirm her suspicions, and when they get to the hospital they encounter an extremely sickly young man. Scully tells Einstein that she tested her own blood six weeks ago and found an anomaly — and tells her that while they both believe in science, she now believes that it only helps them move in the direction of the truth.

Scully believes that human DNA has been tampered with — potentially via the smallpox vaccine we’ve all received. And that the government is shutting down immune systems. Einstein is still skeptical — and Agent Miller (Robbie Amell) shows up with O’Malley’s latest clip, in which he interviews a doctor that claims there’s a global virus on the loose that has the potential to create a fast-moving worldwide pandemic.

Scully tells Nurse Sandeep (Aliza Vellani) to give the patient they saw a treatment for Anthrax — she believes that, as military personnel, his body is reacting to the vaccination he received. And that his infection is the “canary in the coal mine.” Einstein wants Scully to slow down and wait for her test results to come in — but she’s quickly proven right as more and more patients roll into the hospital.

Meanwhile, Mulder’s driving around with an impressive shiner, rejecting Scully’s frantic phone calls as he is wont to do. Agent Miller tracks his cell phone and takes off to meet up with him in Georgia.

Back in D.C., Scully gets a phone call from Special Agent Monica Reyes (Annabeth Gish), who meets up with her former colleague to tell her that she knows what’s going on. Reyes tells Scully that she left the FBI a decade ago after she was summoned by the Smoking Man (William B. Davis) at a hospital. She found him wrapped head to toe in bandages, struggling to recover from third degree burns. But he didn’t seem to concerned with his state. He told her he had the power to depopulate the entire world with what he and his evil cronies dubbed the Spartan Virus using alien technology that the government uncovered in the Roswell crash. Because that’s reasonable. He also had the power to spare anyone he chose. 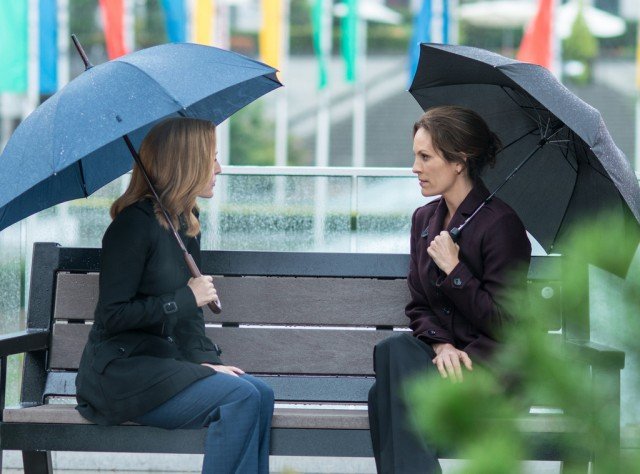 Reyes teamed up with Smoking Man to protect herself. And though Scully calls her a coward, Reyes claims she came to her to tell her she is protected. It appears that because of her abduction and the tests that were done on her, Scully has been made immune — one of the “elite.” And, Reyes says, Mulder will be too — if he takes Smoking Man’s deal.

Mulder, though, doesn’t seem very into that idea. He fought with the guy that Smoking Man sent to his house — hence the shiner — then went straight to the source to confront him. Smoking Man insists he “really wants” to save Mulder’s life, and invokes Scully’s name, claiming that she is Mulder’s weakness. Smoking Man justifies his actions by arguing that aliens predicted humans would destroy themselves, and they’re already doing a fine job. He’s just condensing the timetable a bit.

Smoking Man offers to not only save Mulder, but give him “a seat at the big table.” Mulder — already looking a little bit under the weather — holds steady and says he couldn’t live with himself. Agent Miller shows up to try to save Mulder, but Smoking Man cautions that they won’t get far. In a moment of macabre sentimentality, Smoking Man asks Miller to tell Mulder goodbye for him before he dies.

Ted O’Malley is tracking the growing cases of immunity breaking down and hospitals filling up from coast to coast. Scully witnesses the influx firsthand at the hospital in D.C., and Einstein confirms that there are massive contagions across the country. Einstein’s starting to come around to Scully’s way of thinking — she manages to use the words “alien DNA” without a trace of skepticism — but Scully tells her that she was wrong. Alien DNA isn’t what’s making everyone sick. It’s what’s keeping her alive — and it’s all that can save the rest of the population. She says Einstein needs to amplify her DNA so they can create a vaccine to protect against the Spartan Virus.

One problem: They’re rapidly running out of time. Doctors are getting sick; patients are dying; even Tad O’Malley looks ill as he signs off, amid reports that lines of communication are being cut and society is starting to break down. Scully and Einstein struggle to get a viable sample, but they finally hit a breakthrough — luckily, before Einstein can succumb to her own rapidly growing symptoms.

Scully drives through the chaotic streets of D.C., desperate to track Miller and Mulder down after she makes contact with them. They all connect on a crowded bridge, but unfortunately, Mulder is so sick that Scully thinks the only way he can be saved is if he gets a dose of stem cells. Scully tells Miller that the only person that can provide the protection he needs is their son, William. But before they can solve the problem, an alien spacecraft appears above the bridge, and a beam of light shines down directly onto Scully before the screen fades to black. Because, you know, we were all really hoping for a massive cliffhanger.

Just like that, it’s over — and the X-Files miniseries ends in true X-Files fashion, with a maddening cliffhanger. But while “My Struggle II” was in some ways as chaotic and overwhelming as its counterpart, the season premiere “My Struggle I,” it was in many ways more successful in telling viewers a compelling story.

Though it centered on Mulder and Scully’s parallel efforts to find the truth about the epidemic the finale — like the premiere — felt much bigger than the show’s main characters. Using O’Malley as an exposition device worked better this time around, since it was framed through the context of his web series. And though we were thrown a lot of new information about the government’s involvement in the pandemic, it wasn’t quite as overwhelming this time around.

“My Struggle II” was not in any way perfect, but it had its moments. Carter did a fine job figuring out how to integrate Einstein into the story, but though Miller’s actions were ultimately essential to the plot, his presence felt a bit more forced. And, like any good X-Files episode, it gave us its share of spine-tingling moments. 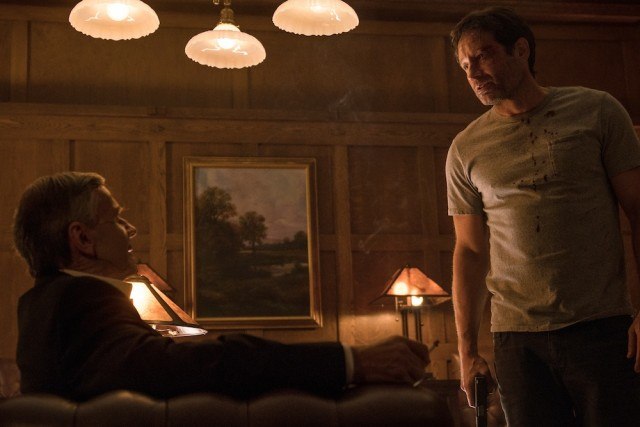 Seeing Scully transform into an alien in the opening moments was an unexpected — and hopefully not prophetic — way to start the episode with a bang. And when Smoking Man removed his faceplate and revealed the scars of his near-death experience, we got a disturbingly gruesome manifestation of his monstrous qualities and a reminder that often the biggest threats to Mulder and Scully aren’t supernatural, but man-made.

But, again in true X-Files fashion, the finale left us with some pretty big questions. How will they solve the global pandemic? Can Scully track William down before it’s too late? How did that alien ship just happen to find her in a sea of people? Why is the ship there at all?

And unfortunately, we have no immediate hope for getting answers. It would be foolish to believe that Chris Carter and his team don’t have a plan to continue the series in some way. But it’s also unreasonable for him to think that fans won’t be at least a little bit frustrated. After all, we waited years for this revival — and now we have to wait even longer for the new threads it introduced to be resolved.

Still, The X-Files, by and large, was a successful reboot of the franchise. It gave us intriguing new characters and some serious quality time with many of our old favorites. And it reminded us that in when it comes to the truth, the search may never be over. So if Chris Carter and team are indeed planning another run, then they gave us more than a few reasons to stick around.