The first half of USA Network’s horror series, The Purge has been a whirlwind, to say the least. Set ten years after The First Purge, the television series has invited its audience into the lives of a new cast of characters, each with their own motivations and backstories.

For the first six episodes, we’ve watched as the characters have come to life. They’ve imploded and crashed against one while desperately trying to survive the 12-hour period where all crime is legal. Two of the most fascinating characters to watch have been Rick (Colin Woodell) and Jenna Betancourt (Hannah Anderson), a married couple whose differing opinions on The Purge have put a strain on their marriage.

Though Jenna is an anti-Purger, she has ventured out on this particular night to support her husband, Rick who desperately wants to make headway for himself in a society that is run by the pro-Purge elite.

Throughout this season of The Purge, the couple has become intrigued and enamored by Lila Stanton, a young, wealthy woman raised by pro-Purge parents who is looking to rebel against their ideals.  Though she has charmed her way into Jenna and Rick’s lives, it has become increasingly clear to the audience and to the Betancourts, that Lila might not be as innocent as she claims. 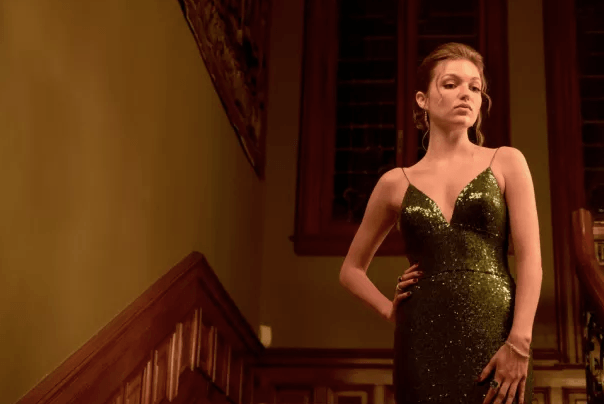 Lili Simmons as Lila Stanton in ‘The Purge’ | USA Network

In an exclusive clip from tonight’s episode, “Lovely Dark and Deep,” watch as Jenna and Rick begin to unpack Lila’s story.  It’s been clear from the premiere episode that she’s been hiding something, and now the Betancourts are finally picking up on it.

Much more than a horror series packed with violence, The Purge has focused on themes that affect society including race, class, the workplace, and gender identity. Mixing in a night of terror with a culture that thrives on capitalism can only be a recipe for disaster. What Jenna, Rick and even Lila are going to begin to discover is that every single decision that you make, especially when The Purge is involved is going to have major ramifications.

From the looks of it, no one is prepared for what’s to come.

The Purge airs Tuesdays at 10/9c on USA Network.