We still have quite a ways to go before the HBO fantasy series Game of Thrones returns for its eighth and last season. However, that doesn’t mean we don’t have some idea about what will happen when the lights go up in Westeros once again. The seventh season closed with a bang — literally. We all watched in horror as the Wall went tumbling down and the Night King led his fellow White Walkers and Army of the Dead into Westeros.

With such a massive climax, we can only assume that doom and gloom (even more than usual) will be awaiting our beloved John Snow, Daenerys Targaryen, and the rest of their crew. Though we certainly expect to see some of our favorites meet their end, one Game of Thrones actor is looking forward to his character’s demise for a shocking reason.

A plethora of deaths

We learned the hard way in Season 1 that Game of Thrones creators and showrunners David Benioff and D.B. Weiss had no qualms about killing off main characters and fan favorites. To this day, we can barely deal with watching Ned Stark’s beheading.

Since those first few deaths, over 200 characters have been killed off the show. For those characters who are still living, it’s surely a miracle.

The end of Cersei Lannister

At present, aside from the Night King, Cersei Lannister is probably the most diabolical and insane character on Game of Thrones. The Mad Queen has burned all of her enemies to the ground, taken over land and ships, banished her twin brother Jamie Lannister from King’s Landing, and double-crossed John and Daenerys on their pact to fight the White Walkers. And yet, if we know anything about GoT, we don’t think we’ll be seeing the end of Cersei anytime soon.

However, if the lights go out for her in the final season, actress Lena Headey has told Entertainment Weekly that she wants her character to have an “epic death.” Somehow we don’t think the show will be quite as good without her.

Death is beneath her

We agree with Emilia on this one. | HBO

While many Game of Thrones actors are looking forward to or a least anticipating their character’s death, there is one who refuses to think about it at all. Emilia Clarke who plays the Mother of Dragons, Daenerys Targaryen, told IGN, “Like there’s no way she can die. She’s going to win. Obviously.”

Isaac Hempstead-Wright hates Bran just as much as we do 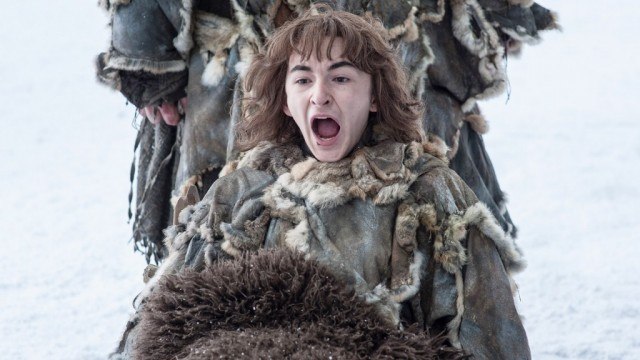 It’d be an interesting death for sure. | HBO

In the early days of Game of Thrones, Bran Stak started out as a precocious little boy who was pushed from a high tower and crippled by Jamie Lannister. We all had a soft spot for Bran, especially when we learned the boy who loved to climb would be disabled for life. Unfortunately, all of our patience ran out when the Stark teen became the Three-Eyed Raven.

With his odd ramblings and know-it-all behavior, we’ve had just about enough of Bran and apparently so has Isaac Hempstead-Wright, the actor who plays him. Hempstead-Wright told IGN he hopes Bran has a cruel death.

He explained, “I’d like to have his intestines ripped out. And he needs to be strangled with them.” His words, not ours.

Ben Crompton is ready to put his character to bed. | HBO

Since Day 1, Edd Tollett, a member of the Night’s Watch, has been ride or die for his good friend, Jon Snow. Though his pessimism and stoic nature aren’t exactly uplifting, Edd has been around from Hardhome to the Battle at Castle Black. Now, actor Ben Crompton, who plays Edd, is ready to hang up his character’s black cloak — and his reasoning is rather alarming.

He told Metro about his time on Game of Thrones saying,

I’m grateful and so is my mortgage. In a way, I’m surprised just because, just for a character to have that longevity in a show where characters get killed off so regularly. In a way, it’s penance for him. He’s a character who, of all the characters, he’d be quite happy if he dropped off his mortal coil, and in a way, it’s punishment for him to have to endure everyday life.

Day-to-day life does seem exhausting on Game of Thrones.

A fiend for fire

During Season 7, things really heated up for Jamie Lannister. He was nearly blasted away by one of Daenerys’ dragons. Apparently, this would be the stuff of dreams for actor Nikolaj Coster-Waldau, who plays Jamie.

He told The Observer, “It has to be a dragon death. It’s got to be the dragons that get him. Just fried. He has to burn. Has to.”

Sansa Stark is deserving of a glamorous death. | HBO

We suppose working on Game of Thrones has made all of the actors morbid. At the very least, it’s given them time to think about how they want their characters to say goodbye. One of the most arresting character arcs has been Sophie Turner as Sansa Stark.

Over the past seven seasons, we’ve watched her blossom from a bratty teen girl to a badass woman. However, that doesn’t mean Turner isn’t realistic about Sansa’s situation. In fact, she’s given the Queen of the North’s death quite a bit of consideration.

She told Time she envisioned, “A long, slow episode-lasting death, where it’s just one long scene of my death and no one else. And it’s going to be the last episode of the last season.”

Honestly, Sansa has been through way too much to go out like this.