Kate Middleton and Meghan Markle have proven to have a lot in common. One of those major similarities between the two ladies? Their fashion sense. Over the years, Middleton and Markle have stepped out in nearly identical outfits that we just can’t get enough of.

Here’s a look at Middleton and Markle’s best twinning style moments over the years, leading up to their best matching outfits so far. 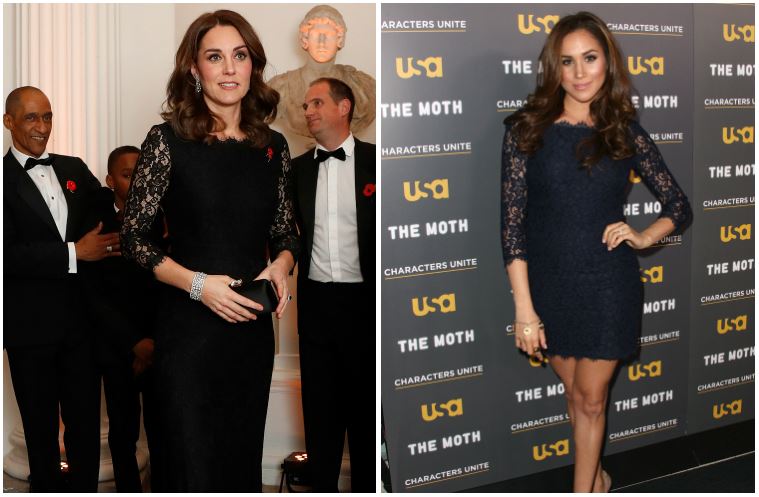 However, her decision to wear the dress again wasn’t the only reason people were talking about it. Many recognized the dress as the same one Markle wore back in 2012. Markle’s version, however, is navy instead of black and much shorter than Middleton’s dress.

Next: They rocked the same pattern four years apart. 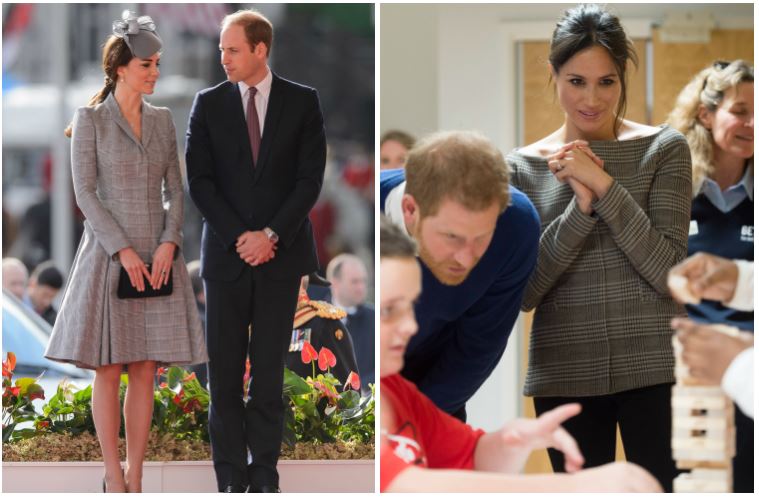 These two looks may be four years apart, but each of their gray plaid ensembles look completely on-trend. Middleton wore her plaid coat by Alexander McQueen to the welcome ceremony for Singapore’s president, Tony Tan Keng Yam, in October 2014.

Markle rocked her gray plaid in a more casual way during a January 2018 visit to Star Hub, which is a sports leisure center that works with getting local children more active.

Next: They both looked stunning in this bold color. 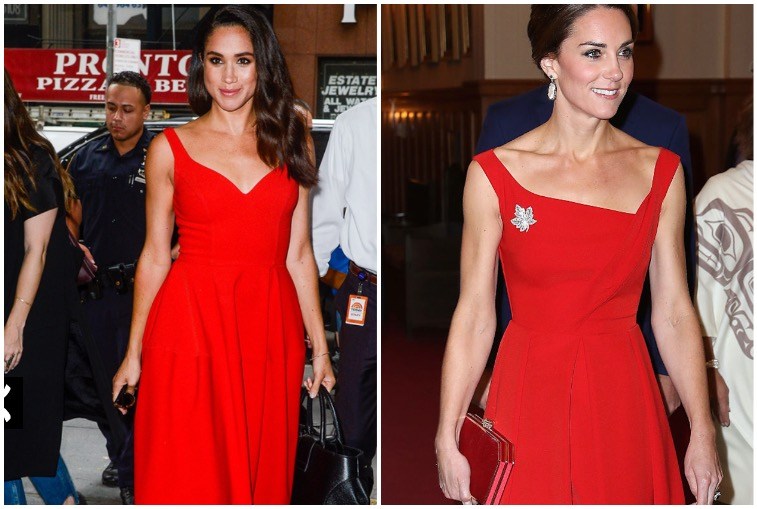 Markle and Middleton had all eyes on them in each of their midi-length red dresses. Middleton’s elegant ensemble was worn to a reception at the Government House in Victoria, Canada in September 2016.

According to Harper’s Bazaar, Markle’s Jill Jill Stuart dress was worn in 2016 as well, during a July appearance on the Today show.

Next: They tailored this pattern to their individual styles. 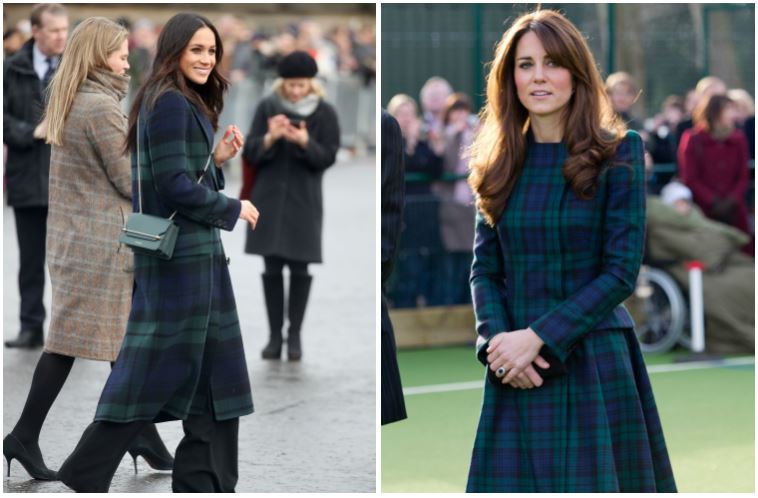 Middleton and Markle are clearly both fans of plaid patterns. They wore the same shades of blue and green in each of their looks, but tailored to their individual styles. Markle has stepped out in a number of long coats since becoming engaged to Prince Harry, and she rocked this Burberry piece while arriving at Edinburgh Castle in February 2018.

Middleton wore the plaid pattern on a familiarly modest dress style. She wore her look by Alexander McQueen to take part in St. Andrew’s Day activities in 2012.

Next: There’s a reason this coat looked so familiar.

3. All in the (sleeve) details 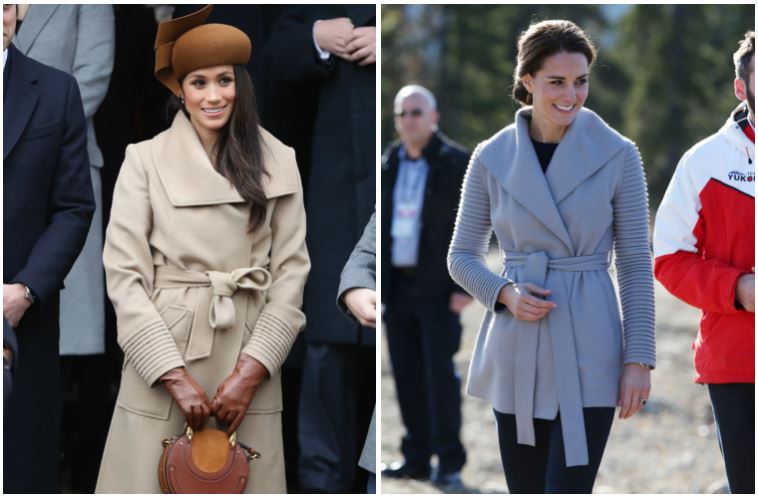 If Markle’s coat from Christmas 2017 looked familiar to you, it’s probably because Middleton wore a very similar style in 2016. Middleton wore her wrap-style jacket with ribbed sleeve details while on the Royal Tour of Canada.

Both coats are by Canadian label Sentaler, so it’s certainly possible that Middleton helped her pick out the look.

Next: They even dress down similarly. 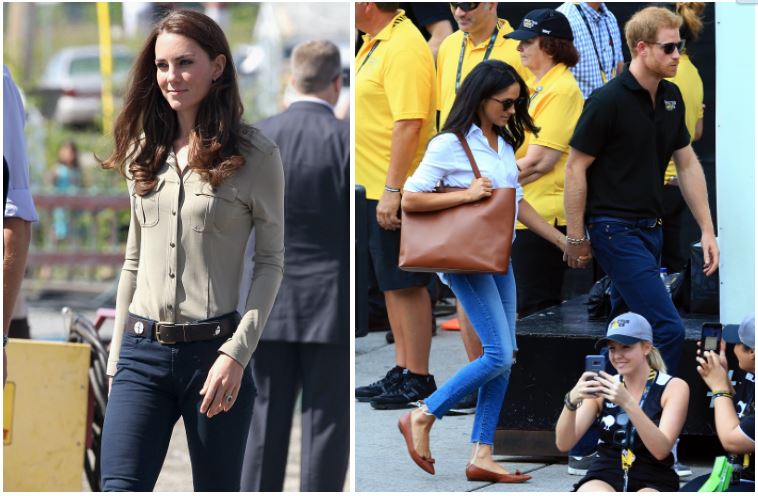 Middleton and Markle may be familiar with going all out in gowns and sky-high heels, but they know how to get casual, too. And when they do, they still remain style twins. In July 2011, Middleton kept it simple yet chic on a tour of Canada in a button-down top, paired with skinny ankle pants and boat shoes.

Markle opted for a very similar style when she and Harry first debuted their relationship at the 2017 Invictus Games. Her white Misha Nonoo button-down top paired perfectly with her ripped-at-the-knee jeans, flats, and Everlane tote bag.

Next: This is their best twinning style moment so far. 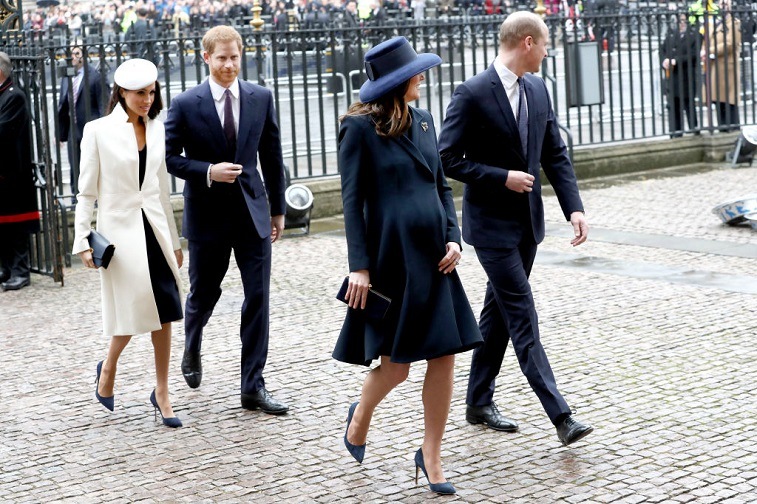 Their shoes are very similar in this photo. | Chris Jackson/Getty Images

Markle and Middleton turned heads in their look-alike outfits for Commonwealth Day Services in March 2018. While their coordinated color schemes complement each other perfectly, they decided to go with almost the exact same footwear.

While their pumps look completely identical, they’re actually by different designers. According to Glamour, Markle is wearing Manolo Blahnik, and Middleton’s heels are by Rupert Sanderson.

We love that they boldly chose such similar looks to step out in together — which is something we hope to see a lot more of in the future.