Thor vs Loki: Which Hank Williams Film Will Win? 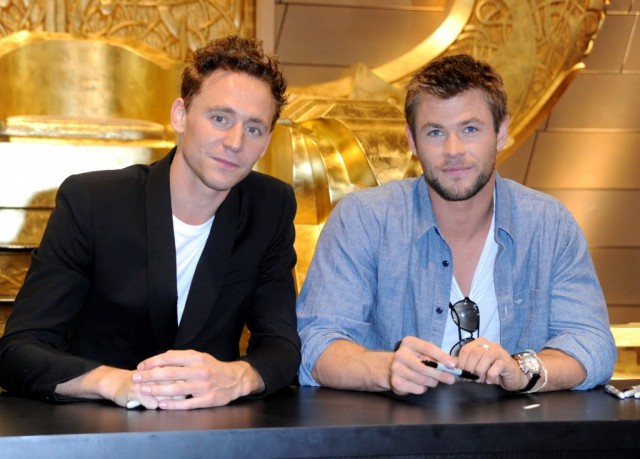 It looks like Thor and Loki are both going country. As revealed this week, Chris Hemsworth is set to star in a movie revolving around Hank Williams, entitled I’ll Never Get Out of This World Alive. But it’s not the only flick about the country music legend heading our way. In a weird coincidence, Tom Hiddleston, Hemsworth’s co-star in Marvel’s superhero flick, is also set to star in a biopic chronicling the story of the singer-songwriter.

According to TheWrap, Hemsworth has optioned the film rights to Steve Earle’s fiction novel, I’ll Never Get Out of This World Alive, with plans to both produce and star in the adaptation. Benjamin Grayson will reportedly write the script as well as make his directorial debut with the indie film, which takes its title from a song he co-wrote in 1952 that also ended up being the last-ever single he released during his lifetime. Laura Bradford (Traffic) is also on board to produce.

It’s definitely an interesting story to adapt. Per the synopsis, Hemsworth will play Toby “Doc” Ebersole, a man haunted — literally and figuratively — by the ghost of Hank Williams after playing a role in his death. In addition to being one of the last people to see the singer alive, Ebersole is rumored to have given the star the final morphine dose that killed him. The story picks up ten years after Williams’s death when the doctor has lost his medical license and is performing illegal abortions in order to fund his own morphine addiction. Things start to turn around for the doctor when he meets a young immigrant, Graciela, who “heals others with the touch of her hand,” but the ghost of Williams isn’t “at all pleased to see Doc doing well.”

But while Hemsworth may be dealing with Williams’s ghost in his movie, Hiddleston will actually be playing the singer himself in his respective project. The actor is temporarily leaving his villainous side behind to play the title role in the upcoming biopic, I Saw the Light, based on the 1994 book Hank Williams: The Biography. It’s a role that the actor is obviously taking very seriously. He made headlines earlier this month for covering two different Williams’ songs during a surprise performance at Michigan’s Wheatland Music Festival. Unfortunately, the resulting footage wasn’t enough to tell if he’d be able to do the country star justice. But it was enough to stir up all kinds of buzz for the film, which co-stars Elizabeth Olsen as Williams’s wife, Audrey Mae.

There are still plenty of details to be worked out in both projects. Hiddleston’s biopic is just beginning to round out its cast, while Hemsworth’s is in even earlier stages. Still, it’s already clear that fans should expect both movies to be wildly different. While they may touch upon the same subject, Hemsworth’s adaptation is a significantly darker-sounding fictional tale than the straightforward, biographical I Saw the Light. Regardless, one thing’s for sure: we’re not in Asgard anymore. Both parts are worlds away from the superhero parts they’re each known for — not to mention pretty unlike anything they’ve done ever before. It’ll be interesting to see them take on the challenge.

In the meantime, both actors are keeping busy; 2015 will mark a big year for with the cybercrime thriller Blackhat, the whale tale In the Heart of the Sea, and Marvel’s Avengers: Age of Ultron. Meanwhile, Hiddleston will also star in the sci-fi drama High-Rise, the Guillermo Del Toro horror flick Crimson Peak, and he most recently signed on to star in Joe Cornish’s King Kong origin film, Skull Island.