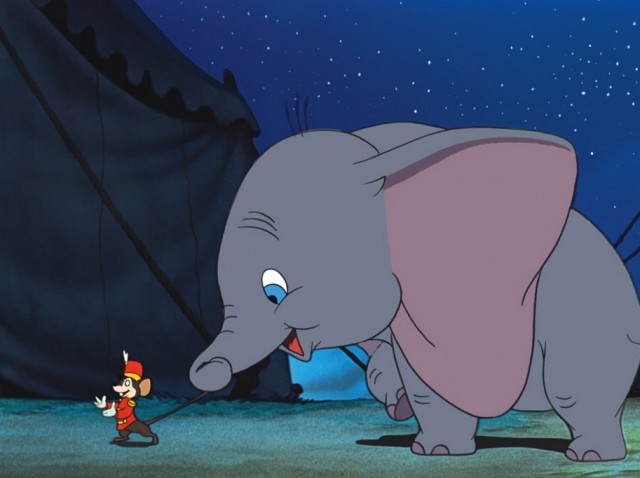 After kicking off Disney’s new live-action reboots of its animated classics craze with his $1 billion-grossing Alice in Wonderland, Tim Burton has been tapped to direct another, perhaps less expected, live-action version of a Disney animated classic. The Wall Street Journal has reported that Burton will direct a live-action version of Dumbo, the 1941 animated film about a baby circus elephant who gets separated from his mother. Given that Burton isn’t exactly at the height of his creative talents anymore, this film will probably be similar to Alice in being visually stunning, a big money earner, but overall, not very good.

Disney’s live-action fairy tales have been very successful thus far. Aside from Alice in Wonderland, last year’s Angelina Jolie-starring Maleficent, a retelling of Sleeping Beauty, was also a top-grosser. Given how timelessly appealing fairy tales and princess stories are, redoing them with famous actresses is a no-brainer for Disney. The live-action reimagining of Cinderella starring Helena Bonham Carter, Lily James, and Cate Blanchett comes out this weekend and is expected to perform well at the box office. It was recently announced to much fan joy that Harry Potter’s Emma Watson will play Belle in a live-action version of Beauty and the Beast set for 2017.

The harder thing to imagine with a reconceptualization like Dumbo, is how it will be done given that none of the characters are human. This is difficult to pull off from a visual standpoint and due to the fact that it prevents the casting of a big star to draw in audiences and guarantee box office success.

Walt Disney Pictures president Sean Bailey told the Journal that the movie would be a mixture of real actors and computer animation, though he said that there weren’t many details about the movie worked up yet at this early stage of development. Bailey did say of the story “It’s a big world,” meaning that Burton could go far outside the original story of a young elephant with big ears who learns to fly in order to return to his mother. Burton’s Alice and Maleficent both explored those original stories with feminist retellings.

Dumbo certainly has the dark undertones that Burton is known for exploring in his films. Circus mistreatment of animals is at the core of the film and something that has been in the news recently with the Ringling Brothers being pressured into retiring their circus elephants by 2018 due to accusations of abuse. With Burton’s signature dark visuals, he should be able to pull off telling a story like Dumbo that has minimal humans involved.

How Disney pulls off its planned “live-action” version of The Jungle Book will be an indication of how Dumbo will fare. This definition of live-action seems to extend to heavy amounts of CGI and computer animation, as The Jungle Book consists heavily of animal characters as well, though the main character is a young boy. Iron Man director Jon Favreau is directing the new Jungle Book with a voice cast that includes Bill Murray as the bear Baloo, Ben Kingsley as the panther Bagheera, Christopher Walken as the orangutan King Louie, Scarlett Johansson as the python Kaa, Lupita Nyong’o as the wolf mother Raksha, and Idris Elba as the villainous tiger Shere Khan.

It’s worth noting that while Burton’s version of Alice in Wonderland grossed over $1 billion worldwide per Box Office Mojo, performing well enough to land him a sequel, it was not well-received by critics. The film has just a 51% rating on Rotten Tomatoes and critics felt that while the movie was visually stunning, Burton sacrificed the book and original animated version’s compelling story. The upcoming sequel Alice in Wonderland: Through the Looking Glass will likely be more of the same, a high-grosser that looks cool but has none of the original’s heart.

There’s not much reason to think Dumbo won’t be the same. Burton hasn’t been at the top of his game in some years, and his best movies like Edward Scissorhands and Ed Wood were based on original ideas. His critical failures have been those bad, big-money adaptations. If they were letting him do a stop-motion version with Henry Selick, there would be a little more hope, but Disney isn’t going to want a Nightmare Before Christmas version of Dumbo to mess up its money-making strategy of redoing its animated movies, a scheme that Burton helped kick off with his Alice movie. It will be interesting to see how Dumbo turns out, but fans of the heart-wrenching and hallucinatory original shouldn’t get their hopes up too much.