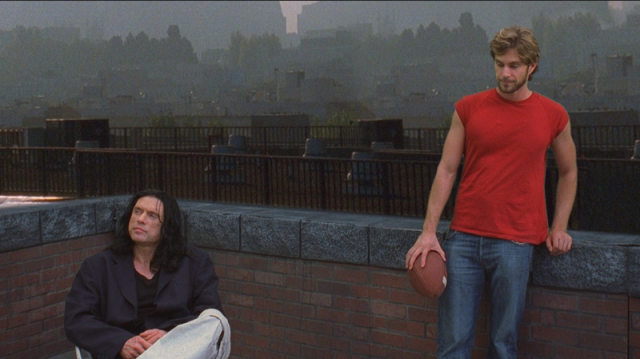 Tommy Wiseau, the strange man behind the midnight movie classic The Room, has returned to filmmaking with the equally bizarre new TV show The Neighbors. Though he says the show is very different from the movie that made him into a cult figure, according to The A.V. Club, the two projects actually have a lot in common and fans of the we’re-laughing-at-the-guy-who-made-this type humor in The Room will probably enjoy laughing at Wiseau’s weirdness again.

The Room is frequently referred to as “the Citizen Kane of bad movies” and “the worst movie of all time.” The movie is so truly terrible that it makes little sense and ends up being hilarious when Wiseau had intended it to be a high drama. What sets The Room apart from the thousands of bad movies that get made every year is that something about Wiseau’s vision is so off, so weird, so missing-what-he’s-going-for that it becomes fascinating. The movie came out in 2003 and midnight screenings of it still regularly sell out at college campuses around the country.

It’s hard to explain the humor of Wiseau to anyone who hasn’t seen The Room. The movie is a melodrama filled with scenes that move too quickly or too slowly, characters and storylines that are picked up and dropped, very uncomfortable sex scenes that sometimes you have to watch twice, and a poor actress who will go down in history as the ugly girl from The Room.

The movie and Wiseau have been back in the spotlight recently as James Franco and Seth Rogen purchased the rights to a memoir about making the movie from The Room star Greg Sestero, as Franco plans to play Wiseau in a movie about the making of the worst movie ever. Seth Rogen spoke about the project on SiriusXM satellite radio back in May. “It’s your instinct to just say, fuck this movie, it’s a horrible piece of shit, why would you do this? What an idiot. But it’s kind of, what you can’t ignore is that there’s tons of bad movies that aren’t watchable and that like no one watches over and over and over again. So there is something you kind of have to give credit to, because of all the shitty movies [Wiseau] made one that like people still watch 10 years later … There is something oddly brilliant about it,” Rogen said.

The rabid fanbase of Wiseau has been hungry for something new from the filmmaker since 2003 and this fall Wiseau unveiled the pilot episode for his sitcom The Neighbors at a screening of The Room in New York. For now he’s only shown the pilot at film screenings, but he says he has plans to direct an entire season of the show about a building full of bizarre Wiseauian neighbors, including two characters played by Wiseau himself and one that inexplicably wears a bikini the entire time. The A.V. Club says the show is the same kind of horrible, hilarious train wreck that audiences can band together to make fun of. “It’s as glorious a mess as The Room, only this time there’s a level of self-awareness that’s not so much a wink as it is a violent windstorm,” the publication said.

Wiseau, however, doesn’t seem to think The Neighbors has much in common with The Room, though if you read his interview with The A.V. Club you may begin to doubt his judgement of his own work (as well as his sanity) a bit. Each time the reporter tries to make a connection between The Room and The Neighbors, Wiseau does a poor job of changing the subject. “I don’t see [The Neighbors] the same as The Room to be honest with you, because the pace is different, number one. The relationship you have with friends, what’s the difference between betrayal, and you have friends who are fighting? You know what I’m saying?” Wiseau said.

For now Wiseau says he has 10 episodes written. Though only the first has been shown to the public, it seems The Neighbors will be a treat for fans of the campy cult classic The Room. While you might be thinking that no network would possibly be interested in such a mess of a television show, The Neighbors seems like the kind of project that would be perfect for an online streaming service to scoop up, maybe after the unpredictable Wiseau shoots all the episodes.