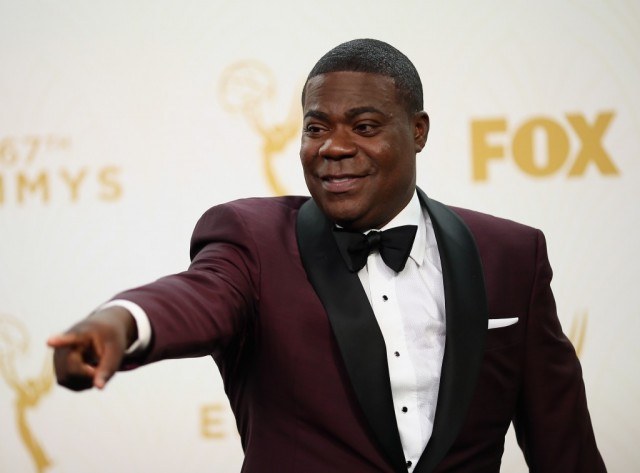 Tracy Morgan is about to make his long-awaited turn to the big screen. The comedian, who has been recovering from critical injuries sustained in a serious car accident for the last year, is reportedly ready to get back to work with a role in upcoming comedy, Fist Fight.

According to the Hollywood Reporter, Morgan is in talks to join the cast of the school-themed flick, which stars Charlie Day and Ice Cube. Written by Evan Susser and Van Robicha, the movie follows the story of two teachers who work in a broken-down school system. Day will play a mild-mannered teacher who is challenged to a fist fight by his imposing and much tougher colleague (played by Cube). Meanwhile, Richie Keen, who has previously helmed short films and episodes of Showtime’s Shameless and FX’s It’s Always Sunny In Philadephia (also starring Day), is set to direct the film.

Should Morgan officially sign on, the actor would reportedly be playing the part of a coach who also works at the school. He would be joining a supporting cast that already includes Dennis Haysbert, Jillian Bell, and Dean Norris. JoAnna Garcia Swisher is also on board to play Maggie, the devoted and loving wife of Day’s character.

For Morgan, Fist Fight will mark his first announced feature film since the June 2014 accident that left the actor in a coma for several days and claimed the life of his friend and collaborator James “Jimmy Mack” McNair. Morgan, whose well-known turn on NBC’s 30 Rock ended in 2013, last appeared on the big screen with voice roles in Rio 2 and The Boxtrolls and a live-action appearance in 2014’s Top Five, starring Chris Rock.

The actor has been slowly but surely making his way back into the public eye in recent weeks. Most recently, he made a surprise appearance at this month’s Emmy Awards. His touching speech at the ceremony earned a standing ovation from the crowd of fellow actors.

Morgan is set to continue his comeback over the course of the next few months. In August, it was announced that the star has signed on to host the third episode of Saturday Night Live’s upcoming season on October 17. The episode will not only mark his first public return to comedy since the accident, it will also be his first time hosting the show since 2009. The actor was previously a cast member on the sketch show from 1996 to 2003.

Aside from signifying a return to the big screen for Morgan, Fist Fight will also mark the third time that the actor and Cube have collaborated on a film. The two stars previously worked together on both the 2005 comedy Are We There Yet? and the 2008 flick, First Sunday.

Hopefully, Fist Fight will be just the beginning of a lot more to come from Morgan. While there’s no word on a projected premiere date so far, the movie is expected to kick off production in Atlanta sometime this month.