‘Transparent’ Could Be Amazon’s ‘Orange Is the New Black’ 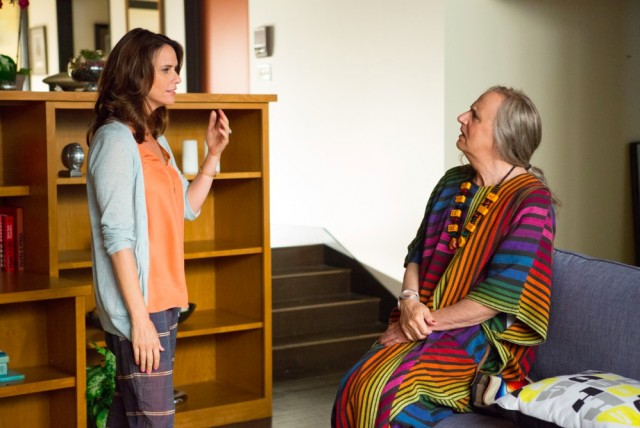 Amazon’s new original show starring Arrested Development’s Jeffery Tambor as a 70-year-old transgender woman is gaining raves from critics as the company looks to build its online streaming service through Amazon Prime to compete with the streaming industry dominator Netflix. Unlike traditional networks, the streaming services seem to believe that their best bet in winning over consumers with their original content is by taking big risks, and the new show Transparent is certainly one that looks like it’s going to pay off accordingly for Amazon Studios.

The show was created by Jill Soloway, who’s also the woman behind series like Six Feet Under and The United States of Tara. Soloway based the show on her own experiences when her father came out as transgender several years ago, though she’s long been preoccupied with gender issues. Transparent examines not only the transgender main character played by Tambor, but also how that character’s children deal with the change.

Critics are already saying that Transgender is for Amazon what House of Cards and Orange Is the New Black have been for Netflix; great original programming that will make users flock to subscribe so they can see the shows everyone is talking about. Both of those Netflix series have won Emmys, bringing online streaming into the realm of serious television, and Transparent could do the same for Amazon. The show’s creators, “might have come up with TV’s best study of family dynamics since Six Feet Under,” reads a review from The Independent, which also called the show “the latest gem in the online TV revolution.”

Tambor’s performance in particular is being drowned in accolades and could result in him being nominated for an Emmy or Golden Globe for his take on the character formerly known as Mort, who transitions into a woman named Maura on the show. Tambor is best known for his more comedic roles on The Hangover and Arrested Development, so playing a character like Maura on a dramedy is a big change of pace that the actor has handled superbly — the kind of thing that awards show voters love to see.

Tambor told The Daily Beast that he prepared for the role by doing tons of research on the trans community and going about his day in Los Angeles dressed as Maura. “I remember the terror of walking through the hotel,” Tambor said to the publication. “And I said to myself, ‘Good. Remember this. Remember this. This is part of what this voyage is. This is what it feels like.’ ”

Soloway spoke to NPR about the challenges that come with pursuing such politically sensitive subject matter and said that she was grateful to the trans community for their feedback as the team worked on the show. “The world knows so little about being trans, and I know very little about being trans — I just know what it’s like to be the child of a trans person. But there’s so little trans representation [and] so few trans people who are creating content, so we really depend on the trans community to help us get it right,” she said. “We’re happy to be corrected.”

While there are plenty of trans actors and consultants working on the show, Soloway did catch some flak from the community for not casting a trans person in the lead role. She says she understands the implications of that decision, but that she’d written the part with Tambor in mind because the actor reminded her of her father.

The show is picking up some of the same critical adoration that Orange Is the New Black’s two seasons have received for Netflix. That series also deals heavily with gender issues and famously features a trans actress in one of its main roles. That actress, Laverne Cox, became the first transgender person to be nominated for an Emmy award in an acting category this year.

Overall it seems that streaming services are distinguishing themselves by not being afraid to address complicated issues that networks have been reluctant to touch. That dynamic could help many different groups start to see their stories being told on television. Meanwhile, Amazon is taking serious steps to take its streaming service from a second-rate goodie you get for ordering a Prime membership to something viewers will want specifically for its original content.