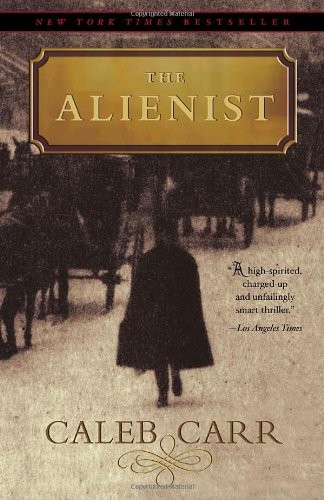 Cary Fukunaga earned critical acclaim for his work helming the entire first season of True Detective, and now, he’s found his next TV project. The director has signed on to create another murder-themed series, this one based on the 1994 bestselling crime novel The Alienist.

Written by Caleb Carr, The Alienist is set in New York City in 1896. It chronicles the story of Lazlo Kreizler, a doctor who uses the-then emerging discipline of psychology to track down one of the city’s first serial killers. In order to help him on his mission, he recruits the help of newspaper reporter John Moore and police commissioner Theodore Roosevelt.

According to The Hollywood Reporter, Fukunaga has signed on to direct and executive produce the small-screen adaptation. Academy Award-winning scribe Eric Roth will co-executive produce the project along with screenwriter Hossein Amini (Drive, Snow White and the Huntsman), who also penned the pilot. The series will re-team Fukunaga and Anonymous Content, who previously collaborated on the first season of HBO’s hugely successful True Detective and the upcoming feature film Beasts Of No Nation. It also marks the first project resulting from the three-year production deal that Paramount TV and Anonymous Content inked last year.

“The Alienist is a fascinating and distinctive, fast-paced psychological thriller that is wonderfully evocative of the unrivaled Gilded Age of New York City,” Paramount Television President Amy Powell said in a statement announcing the news, per THR. “Cary Fukunaga’s unique vision and ability to render compelling, distinctive and superbly atmospheric direction is the perfect voice for this television series.”

Fukunaga does seem like a good match for the project, given his extensive experience in the crime genre. As fans of True Detective will attest, Fukunaga has a way of handling dark themes. The director, who helmed every episode of the show’s critically lauded and much-discussed first season, earned an Emmy for his work on the HBO series. Having chosen not to continue with the show in its second season, many have been waiting to see what his television follow-up would entail.

Whether The Alienist will reach similar success remains to be seen, but it’s certainly off to a promising start, with acclaimed names like Fukunga and Roth on board. Roth has plenty of experience bringing notable stories to screen. He co-wrote the screenplays for several Oscar-nominated flicks, such as Forrest Gump (adapted from Winston Groom’s 1986 novel of the same name), Munich (adapted from the book Vengeance: The True Story of an Israeli Counter-Terrorist Team), and The Curious Case of Benjamin Button (loosely based on the short story by F. Scott Fitzgerald).

For Fukunaga, The Alienist series is only the latest on his already jam-packed slate of projects. The director wrote and directed next year’s feature film Beasts of No Nation, based on the novel of the same name by Uzodinma Iweala. The war drama, which stars Idris Elba and follows a young boy who joins a group of mercenary fighters after losing his family in the war in West Africa, was acquired by Netflix as part of the streaming service’s push toward original films. The project is already sparking awards season conversation.

Fukunaga is also set to develop, write, and direct a new adaptation of Stephen King’s It for Warner Bros. The project will reportedly be split into two films. The director is currently only on board to helm the first movie but is reportedly closing a deal to also co-write the second. The first of the features is due to start shooting this summer.

The Alienist series does not yet have an expected premiere date.