‘Game of Thrones’: Surprising Facts About the Night King 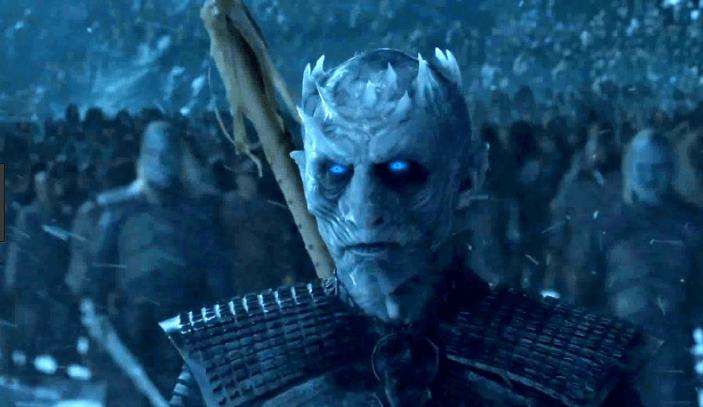 How much do we really know about the Night King? | HBO

It’s hard to keep track of all the villains on Game of Thrones. Since the series began in 2011, we’ve met royal sociopaths, conniving confidantes, and a knight so large and terrifying, they just call him The Mountain.

Much of the focus on major conflicts so far has centered on the living, breathing foes of Jon Snow, Daenerys Targaryen, and the rest of the heroes. But we’ve also seen glimpses of an undead threat looming beyond the Wall. And as Season 7 gets into full swing, we’re coming to see that our favorite GoT characters’ real enemies may not be each other, but an army of undead warriors.

So far, we don’t know much about these frightening creatures. But we do know that they’re led by the Night King, the creepy warrior who is poised to become a major player as winter closes in on HBO’s adaptation.

Fans have theorized that our favorite three-eyed raven, Bran Stark, will eventually become the Night King. Here’s everything we do know about this powerful leader and the role he’ll play in the oncoming war, including what major change in the show he’s responsible for (No. 4).

1. He plays a different role in the book series

When we first met the Night King in Season 4 of Game of Thrones, it seemed like he might be the same, or similar, to the Night’s King — a legendary character in George R. R. Martin’s book series, A Song of Ice and Fire. But as we’ve learned more about the character in the HBO adaptation, fans have figured out that there are some pretty significant differences between the two.

First and foremost, the TV version of the Night King is considerably older than the Night’s King, who first showed up after the Wall had been built. In Martin’s books, the Night’s King is a relative of the 13th Lord Commander of the Night’s Watch, which doesn’t seem to be the case on the TV series.

And most importantly, according to Martin himself, his Night’s King likely isn’t even around during the events of A Song of Ice and Fire. The author told fans on LiveJournal, “In the books, he is a legendary figure, akin to Lann the Clever and Brandon the Builder, and no more likely to have survived to the present day than they have.”

So while we may seem some similarities between the two characters, HBO’s Night King will likely play a much more prominent role.

2. He was the first White Walker

Thousands of years before the events at the center of Game of Thrones, Westeros was still an unsafe place for many of its inhabitants. The First Men invaded the land, destroying its resources and murdering anyone who stood in their way. Then, the Children of the Forest decided to fight back. They captured one of the First and stabbed him with a Dragonglass blade. And in doing so, they transformed him into the first White Walker — an icy undead warrior they could use to protect them against their foes.

Bran saw this all play out while he was warging. And eagle-eyed fans noticed that the actor portraying the First Man, Vladimir Furdik, also plays the Night King. In other words, it’s pretty much a given that the very first White Walker ever created wound up becoming the one that would lead all those who came after him.

3. He is the leader of an extremely dangerous army

Between Cersei, Daenerys, Jon, and every other character that’s claimed a royal title on Game of Thrones, the “king” moniker may seem a bit meaningless. But make no mistake — the Night King is definitely not just a symbolic title. He holds dominion over the Lands of Always Winter in the northernmost part of Westeros.

We know, thanks to visions from Bran and the Hound, that the Night King is leading his army of the dead to the wall. It’s an untold number of White Walkers and wights that did major damage to Jon’s men at Hardhome. Given his prowess in battle, maybe a better name for him would be the Night General.

4. He is the reason that winter has come to Westeros

We’ve heard since Game of Thrones’ very first episode that winter is coming. We learned in the Season 7 premiere that it looks like the Night King is actually the one bringing the storm south.

In one of Bran’s visions, we saw the Night King marching south with his army — with an ominous cloud, raining snow and ice, traveling directly above him. In other words, it’s pretty clear that he’s capable of bringing about the prolonged winter that the Noble Houses of Westeros have long been dreading.

5. He’s got some pretty impressive powers 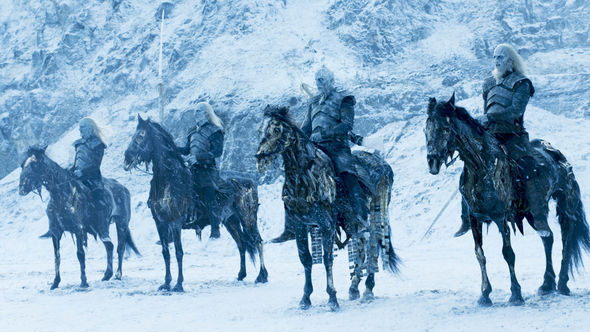 The Night King and his army | HBO

One of the perks of being an ancient undead warrior is that you have some pretty powerful resources at your disposal. One of the Night King’s most invaluable powers is that he’s capable of creating other White Walkers too, as long as the person he’s transforming is still an infant. And he doesn’t even need Dragonglass, just his frighteningly long, dagger-like thumbnail.

As if the ability to literally create your own army isn’t cool enough, the Night King has a few other tricks up his sleeve. We learned when he was tracking Bran and his crew that he’s capable of marking his foes and tracking them across Westeros.

He can also transform corpses into wights with seemingly minimal effort, shatter weapons with a single touch, and even cause the ground to shake and fissure.

The Night King is an unshakeable foe. | HBO

It probably goes without saying that, like all other forms of zombies, White Walkers aren’t easy to take down. So far, our heroes on Game of Thrones have only identified two ways to kill the Night King and his undead allies. The first is with Valyrian steel, which doesn’t shatter when it makes contact with a White Walker’s skin. The second is Dragonglass, the very material used to bring the Night King into existence.

Unfortunately for Jon and anyone else interested in taking on the Night King and his army, both of these items are fairly hard to come by.

7. He could be trying to save, rather than destroy, the Seven Kingdoms

The Night King on his horse | HBO

Thus far, the only thing that’s kept the White Walkers and their Night King from completely invading Westeros was the Wall. If it comes down or if the Night King can somehow use some other means, like Bran, to get through, it could spell doom for everyone.

That is, unless, the reason the Night King is marching south is to save humanity. Sure, it seems unlikely — thus far, they haven’t been all that friendly to the living. But since we don’t know exactly why the Night King is so determined to fight, fans have theorized that they’re actually going to help restore the balance in the Seven Kingdoms.

It makes sense, both from a plot point and symbolically. Something is going to have to unite the warring factions or weed out the evil that’s preventing a peaceful order. And aside from a ceasefire, there’s only one thing that could be able to stop Cersei’s wildfire or Daenerys’ dragons from burning King’s Landing and the rest of Westeros to the ground: ice.