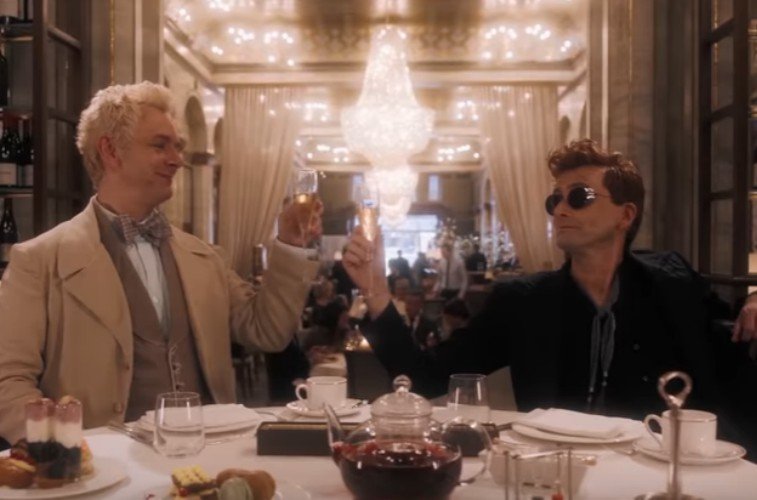 The Terry Pratchett and Neil Gaiman’s fantasy book, Good Omens is finally coming to the television. David Tennant plays a devil named Crowley and Michael Sheen plays an angel named Aziraphale. The two have an unlikely friendship and they pair up to stop the apocalypse because it turns out they actually like living with humans.

David Tennant talked about the show and the rest of his career for PaleyFest on Oct. 9. The Cheat Sheet talked to him about possibly switching roles with Sheen and more.

David Tennant is honored to know Gaiman wrote Crowley for him

Showrunner Gaiman previously said that he ended up writing Crowley with Tennant in mind. “Suddenly I had an idea for a scene which involves some physical comedy, and I thought, ‘I don’t know who could pull that off? That’s really difficult,'” he said according to Radio Times.

But then he came up with a casting choice. “And suddenly I thought: ‘David Tennant could pull that off.’ And suddenly the way that I wrote Crowley from that moment changed.”

The Cheat Sheet asked Tennant what it feels like to know the co-author adapted the character with him in mind. “Hugely honored!” Tennant said. “These are characters that lived in not just Neil’s imagination, but the readers’ imagination for 30 years now. That’s very flattering that anyone thinks you are capable of carrying that forward. It’s also a little bit intimidating. The books are loved and these characters are loved. You don’t want to break people’s dreams.”

Tennant and Michael Sheen joke about swapping roles in the future

Sheen also previously revealed that he thought Gaiman was offering him the Crowley role but was going to refuse because he didn’t feel it was right. So why does Sheen, Tennant, and Gaiman all agree that Sheen makes a perfect angel and Tennant makes the perfect devil? Tennant didn’t know the answer to that, but he did tell The Cheat Sheet that he has talked to his co-star about swapping roles in the future.

“Michael and I often joked on set that we sort of could have been cast the other way around quite easily. So we say when we do the theater tour of this show in years to come,” answered Tennant “we’ll evidentially swap parts every night just to give each other a go at playing the angel and the devil.”

It’s probably good that Tennant did become Crowley for the television show. He later revealed in the PaleyFest Q&A that he did help come up with the devil’s look for the show. “Crowley in the book doesn’t dress like in our version,” Tennant explained. He says his take on the character is “more rock and roll, a bit more funky.” His character used to be a snake so he now wears snake boots.

Fans will get to see more of Crowley’s looks and his friendship with Aziraphale when Good Omens premieres in 2019.

Read more: The New ‘Doctor Who’: 7 Essential Things to Know About Jodie Whittaker