‘The Walking Dead’: 4 Things We Know About Ezekiel

The Walking Dead will kick off Season 7 this fall and fans can expect a major new character to join the ranks. As confirmed at this year’s Comic-Con, Ezekiel will be introduced in the forthcoming season. The character, who oversees the community known as The Kingdom, will be played by Khary Payton (Teen Titans, General Hospital). So what else do we know about the new leader? Here’s everything we know about The Walking Dead’s Ezekiel so far.

1. He’s the leader of The Kingdom 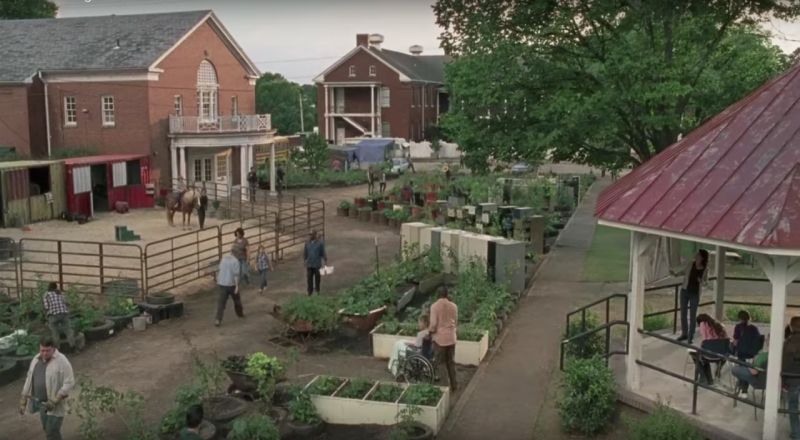 The Kingdom in The Walking Dead | Source: AMC

The character of Ezekiel is first introduced in “Issue 108” of Robert Kirkman’s comic series. He’s known as the charismatic leader of The Kingdom, a community of survivors established on a former high school campus. The residents of The Kingdom dress in protective armor and serve as knights to “King Ezekiel,” as he prefers to be called.

The show teased the introduction of The Kingdom last season, when Rick, Morgan, and Carol pursued a rider on horseback who appeared to be wearing armor. Shortly afterwards, they discovered an archaic-looking spear that was used to kill a walker. The scene immediately fueled rumors that the next season would be introducing The Kingdom and it’s quirky leader. That speculation was officially confirmed at Comic-Con, which also unveiled its first look at Ezekiel’s community (as seen in the still above).

Ezekiel with Shiva in The Walking Dead | Source: AMC

Ezekiel is one of the quirkiest characters from The Walking Dead series, in large part because he’s constantly shadowed by his pet tiger, Shiva. As explained in the comics, prior to the zombie-fueled apocalypse, Ezekiel was a zookeeper. The tiger has remained loyal to her master and defends him from threats. Though Shiva is immune to the virus, she’s not immortal to other injuries.

While it was initially unclear if and how the show would incorporate Shiva, it’s since been confirmed that the tiger will make an appearance on the series, as captured in the Comic-Con trailer below.

3. He’s an important ally to Rick

Though Ezekiel and the rest of The Kingdom members are wary of alliances with the others survivors, his deep hatred of Negan convinces him to link up with Rick Grimes and crew. If the series sticks with the original comics, audiences can expect to see Ezekiel team up with Rick and help him and the rest of the beloved survivors battle against Negan’s rule.

The show gave audiences its first glimpse at Payton’s Ezekiel and his pet tiger, Shiva, in the trailer for the upcoming seventh season, seen above. From the looks of the clip, Ezekiel will be just as eccentric as he is in the comics. He appears to be ruling The Kingdom donned in dreadlocks and feathers, with an ornate staff and Shiva by his side.