Four young women are locked in an underground bunker for more than a decade, guarded by a bearded madman who dresses them like pioneer women. When they emerge from his prison, they find the world changed around them, and one of the traumatized girl struggles to find herself in the unfamiliar, hostile territory of New York City.

The premise reads more like the logline for tragic, tear-jerking awards bait, a la last year’s Room, instead of a goofy Netflix original comedy. It’s a testament to the writers of Unbreakable Kimmy Schmidt to notice how deftly they use this tragic, ripped-from-the-headlines concept as a platform for Tina Fey’s anything goes-style of comedy, earlier honed on NBC’s 30 Rock. 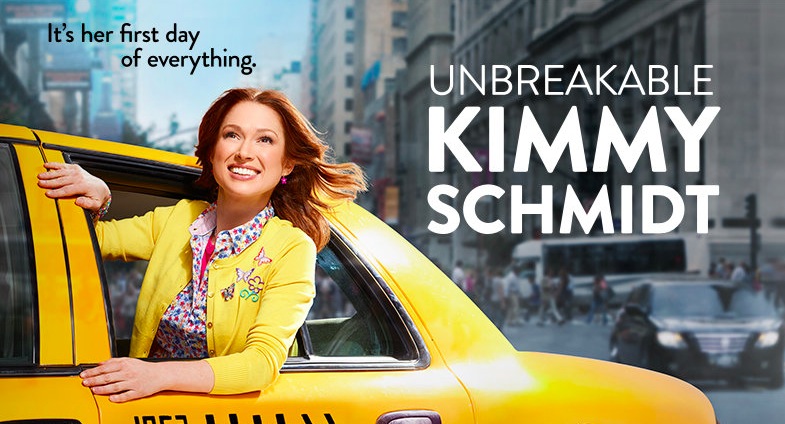 Unbreakable Kimmy Schmidt comes from NBC Universal as well, though the network decided to pawn the series off to Netflix out of fear it could potentially alienate viewers with its dark backstory. The series, whose second season premieres on the streaming service April 15, does have a network-worthy sheen the other Netflix original comedies like Love and Master of None lack, in terms of the show’s bright aesthetic, tight plotting, and joke density. There’s nothing extraneous in an episode of Kimmy Schmidt, because even the most extraneous of cutaways and inconsequential conversations are loaded with moments of off-the-wall hilarity that do more than enough to justify themselves. Compare that to one of Love’s commonly overlong episodes, wherein long minutes of screen time are wasted on supporting characters without any clear reason for existing.

Everything on Unbreakable Kimmy Schmidt exists to be funny, and almost all of it is, thanks to the unending creativity of Fey and her team of writers, managing to outodo the high bar of comedy set by 30 Rock. The oddly specific, tragic backstory is par for the course for the rest of the series, which finds humor by using every line and cutaway to delve into the similarly specific lives of the series’s oddball characters. The sheer strangeness of finding out that Jane Krakowski’s anorexic Park Avenue stepmom was born to Native American family is funny enough, but it becomes funnier, and even oddly touching, when the series commits wholeheartedly to the idea, using it to explain and evolve the character by the end of the first season.

This is a series that commits. It commits to its decidedly uncomedic premise and especially to the weirdness of its characters, all of whom seem to at least match Kimmy in this sliding scale of insanity. Even the cutaways and tangents are funny because of character, as when we see Kimmy’s flamboyant roommate Titus putting on his own version of the Lion King musical in a deserted basement. 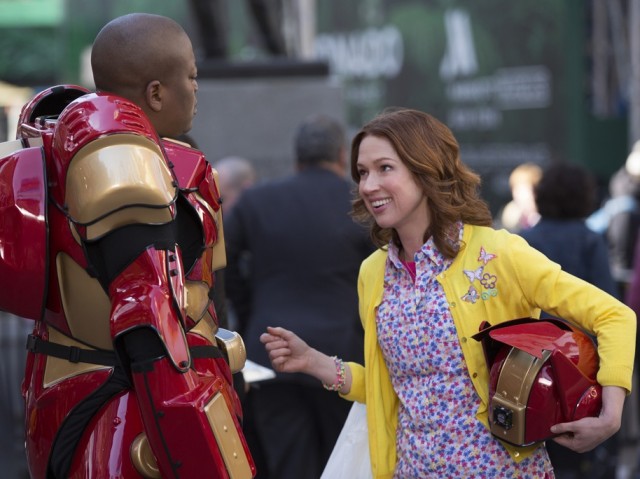 Tina Fey’s everything-goes style of comedy might have its closest relative in adult animated cartoons, like The Simpsons in its heyday, where the characters seem to live in a recognizable, if kooky version of our reality that’s occasionally prone to absurd flights of fancy. Even the characters, like most citizens of Springfield, are stereotypes (the struggling gay actor, the bearded cult leader, the spoiled rich princess) given surprising depth as the season goes on and the writers double down on their specificity without ever going for the easy sob story.

The show’s comedically counter-intuitive premise itself is something of a sob story, but it works because it isn’t played for tragedy. This positive approach to dark material is best illustrated by the series’s upbeat earworm of a theme song. The song, adapted from newsreel footage of a neighbor commenting on the discovery of Kimmy and the other kidnapped women, doesn’t revel in the tragedy of what they endured but instead celebrates the unbreakable spirit that allowed so-called mole women to endure. “They alive, dammit!” indeed.

Everyone is a little crazy in this cartoonish version of the real world, and the madness can sometimes become as infuriating as it is hilarious, as in the first season’s final stretch of episodes focusing on the trial of the mole women’s captor (Jon Hamm). But like its title character, the series never gives into cynicism but clings to the infectious optimism that Kimmy so perfectly embodies, maybe even better than a catchy 30-second theme song. The credit belongs to Ellie Kemper, who manages to make child-like naivete and positivity feel so natural and endearing.

Though this is a show first and foremost about telling funny jokes by any means necessary, it’s also, obviously, about Kimmy’s “fascinating transition” back into the real world that was lost to her as a child. She witnesses the harsh realities of the new reality, embodied to varying degrees by the show’s supporting cast, from Titus’s financial woes to Xanthippe’s catty adolescent angst. Seeing the world through her eyes, however, it’s easy to ignore the evil and enjoy the goofy absurd insanity of this fun-house mirror version of the real world. She makes it easy to laugh, and Fey gives us plenty to laugh about in every minute of screen-time.