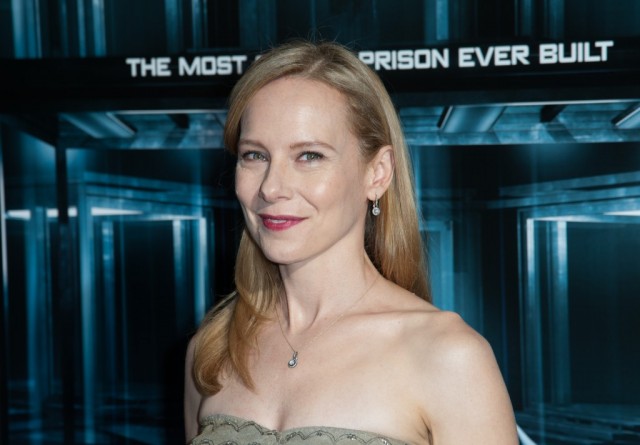 Steven Spielberg has done some major casting work for his new Cold War movie, confirming that Amy Ryan will play Tom Hanks’s wife in the film while Alan Alda, Billy Magnussen, and Eve Hewson are also in talks to star alongside frequent Spielberg collaborator, The Hollywood Reporter reports.

Ryan is known for her diverse body of work in TV and film, earning accolades for her roles on the shows The Office and The Wire as well as an Academy Award nomination for her portrayal of a welfare mother in Gone Baby Gone. Ryan is also in the highly buzzed-about movie Birdman from director Alejandro Gonzalez Iñárritu and starring Michael Keaton as an actor whose claim to fame was the role as the superhero ‘Birdman,’ which is set to close the New York Film Festival this year. Ryan’s ability to switch between humorous roles like the dorky HR rep Holly in The Office and the mother of an abducted child on Gone Baby Gone will serve her well on the as-yet-untitled project from Spielberg, which is strangely being written by the cult-favorite filmmakers the Coen brothers.

Eyebrows were raised earlier this spring when it was reported that the Coens were writing for a Spielberg film, as the filmmakers’ styles couldn’t be more different. The Coens’ penchant for kooky characters and bizarre dialogue seems completely out of place for a typically serious Spielberg movie.

The movie’s plot is based on the true story of the attorney James Donovan, who was hired by the CIA to sneak past the Iron Curtain and help the U.S. negotiate the return of an American U-2 pilot who was taken as prisoner after his spy plane crashed in Russia. Donovan published a book about the case, called Strangers on a Bridge, but it’s unclear if the screenplay will be adapted from that memoir. His work with the U.S. and Russian governments on the case, which saw the Russian spy leader Vilyam Genrikhovich Fisher released by the U.S. and exchanged for the fighter pilot, won Donovan the Distinguished Intelligence Medal.

The material seems right up Spielberg’s dramatic war movie alley, but the script from the Coen brothers could result in a funnier movie than one might otherwise expect. Hanks, one of the most beloved actors of his generation, could certainly handle the material if it were to take such a twist, and Ryan’s background suggests that she could as well, making her a good choice to play Donovan’s wife.

As for the other actors in talks to be in the movie, Alan Alda is best known for his work on the TV series M*A*S*H and The West Wing, as well as his supporting role in the 2004 film The Aviator, which landed him an Oscar nomination. Young actor Billy Magnussen is better known for his work on the stage than on film, but he’s also set to play Rapunzel’s prince on the upcoming film version of Sondheim’s musical Into the Woods. Bono’s actress daughter Eve Hewson has cut her pretty teeth in indies like Enough Said, one of James Gandolfini’s final films, and This Must Be the Place.

Spielberg and Hanks are frequently collaborators and have made three films together: Saving Private Ryan, Catch Me If You Can, and The Terminal. Saving Private Ryan is one of the most acclaimed films of both of their careers, being considered a landmark war movie and landing at No. 77 on the American Film Institute’s list of the 100 greatest movies of all time. Saving Private Ryan landed Spielberg an Academy Award, and Hanks was nominated for an Oscar for his role as U.S. Army Rangers Capt. John H. Miller. That film was also the top-grossing movie of 1998, according to Box Office Mojo. The historical wartime material of this untitled project is obviously something that has done well in the hands of Hanks and Spielberg in the past.

It remains to be seen how exactly the Coen brothers will add their own twist to the movie, but it seems that Spielberg is picking actors that can handle a variety of material to tackle the project. The Hollywood Reporter said that the movie is set to begin production in September, shooting on location in New York and Berlin, and is set to be released on October 16, 2015.