‘The Walking Dead’: Do You Agree With Rick or Morgan? 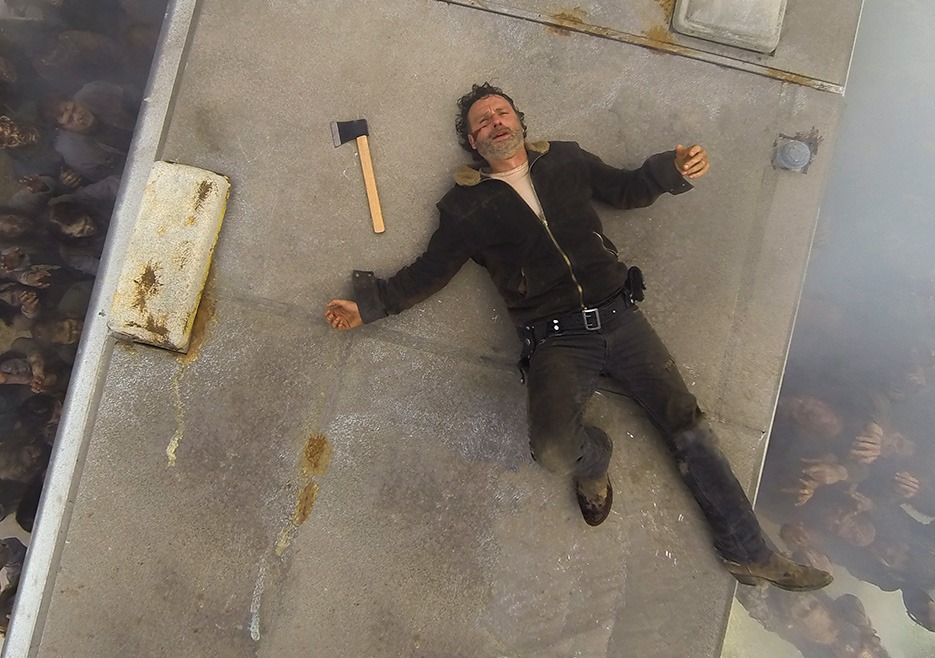 The first six-plus seasons of The Walking Dead were filled with plenty of disagreements. And as the de facto leader of an ever-expanding group of survivors, Rick Grimes (Andrew Lincoln) has been in the center of many of them. When it comes to how the world should function in the midst of ravenous undead enemies, the former sheriff’s deputy has butted heads with many characters over the years. And sometimes he’s shown that he doesn’t always have the best judgment.

But one of the most surprising and compelling differences of opinion for The Walking Dead’s main protagonist has been with Morgan Jones (Lennie James), the man who saved him from certain death in the series’ very first episode. When Rick, Michonne, and Carl encountered Morgan in a deserted town back in Season 3, he was a noticeably changed man; emotionally and mentally scarred by the loss of his son and the horrors he faced, he developed a blood lust — and a macabre set of booby-traps designed to take down his potential enemies. Rick was understandably disturbed by Morgan’s “clear” mentality — but in the seasons that followed, he began to see the potential benefit in Morgan’s no holds barred methodology for navigating the world around him.

Rick, Morgan, and the rest of The Walking Dead crew | AMC

Here’s the twist, though — as Rick has developed his own taste for blood, Morgan has had a change of heart. There are benefits and drawbacks to each of their approaches — but their ideological differences are so pronounced, it would be almost impossible to find a middle ground. As we approach the second half of Season 7 and the inevitable confrontation with Negan, now seems as good a time as any to take a look at both Rick and Morgan’s methods and try to see who might be on the right track.

Few would argue that Rick has been a perfect leader. He started out trying to keep the peace whenever he and his allies ran into someone who was out for blood. In the past, he’s been able to resolve his issues with characters like Hershel without resorting to violence. But he’s also shown, on numerous occasions, that he’s willing to pull out the big guns — like killing his best friend and ripping someone’s throat out with his own teeth — when push comes to shove. Hey, once you’ve faced cannibals and roaming bikers trying to kill your kid, it’s hard to come out on the other side unscathed.

Rick’s journey throughout The Walking Dead has included a gradual loss of his grip on humanity. He’s more than willing now to kill potential foes — even if it’s just to send a message. In that way, he’s not exactly different from, say, Negan these days. Though since we’ve been with Rick every step of the way, it’s easier for us to understand his rationale.

In some ways, Rick’s approach to post-apocalyptic life has had its benefits for his group of followers. The “kill or be killed” mentality doesn’t always come into play, but his defensive strategy has helped keep the group alive on multiple occasions. Still, it hasn’t always worked out in his favor — and his more extreme actions have caused both his allies and fans of the series to worry that his unpredictability is becoming increasingly dangerous. That fact alone makes it worth our time to question whether his actions are doing more harm than good.

Like Rick, Morgan has changed a lot since his first appearance on The Walking Dead. He’s moved from one extreme to the other when it comes to how he approaches life among the undead. While he once had no qualms about killing anyone and everyone in his path, the time he spent with Eastman made him reassess the world around him. He now feels staunchly that humans deserve a chance to redeem themselves — even those that may pose a direct threat.

Morgan’s pacifism is, in many ways, admirable. It takes real character to not assume the worst of your fellow man, especially after everything Morgan’s seen. And he very well could be right, that many seemingly evil people may be worth saving — and that there’s little satisfaction in taking out those that do you harm. And given that he’s already been to some pretty dark places, emotionally and psychologically, there’s a lot to be said for his ability to reframe his thinking, take the high road, and not automatically assume that everyone he meets is an enemy. That very tactic may be what helps the men and women of Alexandria join forces with Ezekiel and the Kingdom for example — which could be a major turning point in the series.

Morgan has tried his best to impart his non-violent approach to Rick. Rick has stayed firm in his “us or them” mentality. In the end, it’s difficult to say who has a better grip on life in The Walking Dead universe. Each methodology has its drawbacks; the people of Terminus, for example, likely wouldn’t have been easily persuaded by Morgan’s penchant to live and let live. On the other hand, a more reasoned approach may have prevented the gang’s terrible encounter with Negan, who clearly didn’t take kindly to having his men executed with nary a chance to bargain.

Ultimately, each man’s viewpoint has been shaped by his own experience. And they both think they’re doing best for themselves and their allies. Perhaps one day they’ll find a way to see eye-to-eye. Until then, we can enjoy watching how their varying methods play out in the rest of Season 7 and beyond.