‘The Walking Dead’: 5 Storylines You Never Got to See

In its seven years on the air, The Walking Dead has introduced fans to some truly unforgettable characters and episodes. From the death of small children to the beheading of the elderly, the series has never shied away from shocking moments. That’s also true of its source material — though there have been stories that many, if not all of us, never got a chance to see. Sometimes, it’s because creator Robert Kirkman decided to take his comic book series in another direction. Other times, it’s because the TV series has strayed from the plot lines laid out in the comic book pages. Here are five storylines that fans of AMC’s The Walking Dead will never get to see.

1. The untimely death of Rick Grimes 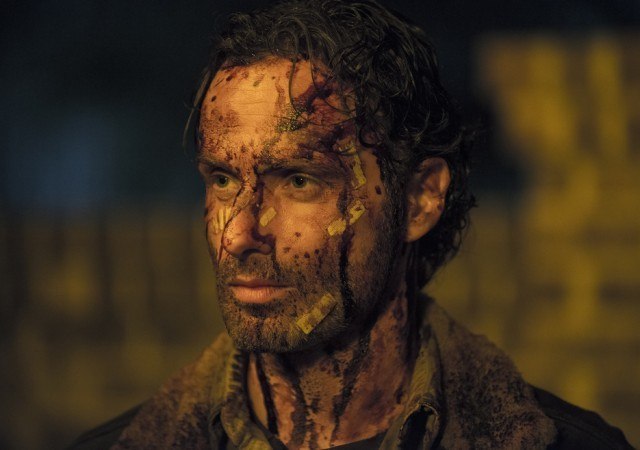 It’s hard to imagine The Walking Dead without its main protagonist, Rick Grimes. And this isn’t to say that he won’t eventually meet a grisly fate, because he very likely could — in fact, Robert Kirkman has hinted that the former sheriff-turned-incredibly-stressed-out-leader could go at any moment. But there was a time early in the comic series’ creation that Kirkman contemplated killing Rick off before he could fully explore the character’s depths. In a 2014 Reddit AMA, he admitted that he considered having Shane kill Rick in the sixth issue of the comic series. It would have created an interesting dynamic between Carl and Shane, for sure — but we’re glad Kirkman decided to keep the elder Grimes alive for the time being.

One of the most memorable characters of The Walking Dead‘s third season was the villainous Governor. The character was also a major plot point in early issues of the comics, though his story often played out much differently on paper than it did on-screen. One of the major differences between the two versions of the story involved a confrontation in which the Governor chopped off Rick’s hand.

It was a shockingly brutal moment; a big loss for the comic’s main character, and a signal that the Governor would be a major threat. Fans wondered whether the moment would come as soon as the Governor showed up on-screen, but it never came to pass. Andrew Lincoln, who plays Rick, even fought to have his character undergo the grisly loss, but he admitted the special effects team felt like it would be too costly to constantly have their main star missing an appendage.

Tyreese was easily one of the most relatable The Walking Dead characters during his tenure on the TV series. And while his comic book counterpart was also quite memorable, he was significantly different in just about every major way. From his love affairs with Carol and Michonne to his violent end at the hands of the Governor, comic-Tyreese’s story barely resembled that of the empathetic, Judith-toting gentleman we saw on-screen.

In The Walking Dead comics, Tyreese was very much a leader. He joined up with Rick’s group early, and ultimately became one of the former sheriff’s most trusted allies. He changed a lot as a person throughout his time on the series, starting as a doting father and ending as a world-weary, hardened warrior with a talent for bludgeoning his enemies with a hammer. Unfortunately, his role was largely downplayed in AMC’s version of events, and we never got to see him truly take the reins.

Andrea and Dale on The Walking Dead | AMC

When The Walking Dead first hit our screens in fall 2010, the ensemble cast was considerably smaller. For better or worse, two of the most memorable characters in the early episodes were Andrea and Dale. The two formed a bond that was, like many other relationships in the series, cut short way too soon. Their affinity for one another in Robert Kirkman’s comics was also strong — and ultimately turned into a decidedly intimate entanglement. The illustrated versions of both Andrea and Dale outlived their television counterparts, and their relationship unfolded pretty organically. And at one point, it seems, the prospect of romance between the two was on the table for the TV adaptation. Instead, their relationship ended up being much more like father and daughter, rather than boyfriend and girlfriend.

Carol on The Walking Dead | AMC

Carol Peletier is one of the toughest ladies to ever grace the small-screen. But fans of the comics know that she was originally a much different character. She was immature, self-absorbed, and ultimately self-destructive. She was often more concerned with hooking up than she was with making sure she and her daughter, Sophia, survived. After a string of romantic disappointments, she decided to end her life by offering herself up to a hungry walker. We can’t say for sure how Carol will meet her end, if she does, in AMC’s adaptation. But it’s pretty safe to say it won’t look much like it did in the comics.