Fantastic Beasts and Where to Find Them is not a movie about Harry Potter — that much is obvious. While it’s set in the same universe, it’s a very different type of story. It’s about adults, for one thing — and it’s set in the United States, rather than in Potter’s homeland of Great Britain. Harry Potter is about a young wizard who must fight against the forces of darkness. Fantastic Beasts follows Newt Scamander, a bright, but sometimes bumbling young wizard who unwittingly unleashes numerous magical creatures while he’s trying to study them.

Despite the creators’ best attempts to draw a firm line between the two franchises, there are plenty of common threads between the two stories. They may not have been obvious to Fantastic Beasts viewers who only consider themselves to be casual Potter fans. But they definitely lay the groundwork for a larger connective line to develop in later films. Here are five connections between Harry Potter and Fantastic Beasts. 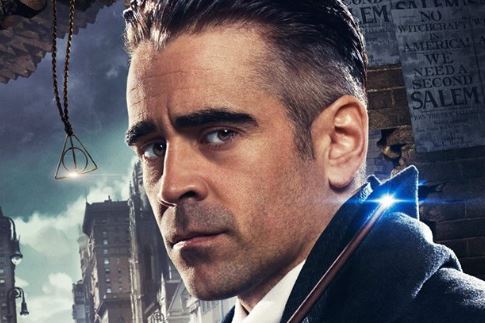 The Cloak of Invisibility. The Sorcerer’s Stone. The Elder Wand. Together, these three items form the Deathly Hallows. And they can make any wizard a master of death. As all Harry Potter fans know, the Hallows were an essential part of the series’ final story. But they were also on display in a blink-and-you’ll-miss-it moment during Fantastic Beasts and Where to Find Them.

When Percival Graves is on the hunt for the obscurus, he has a brief encounter with Credence — and hands him a necklace. The pendant on it is a triangle with a circle and a straight line layered in the middle — in other words, the Deathly Hallows. We know that Harry wasn’t the first wizard to encounter the immortality legend behind that symbol; and given what we later learned about Percival Graves’s true identity, it makes sense that he would have carried that necklace with him. This was a clever little visual tie between the end of one story and the beginning of another.

From the Malfoys to the Weasleys, the Harry Potter universe is full of instantly recognizable Wizarding family names. But few of us expected any to crop up in Fantastic Beasts, given that it takes place more than half a century before the events of J.K. Rowling’s original series. Still, there was an instance where a very familiar name came into play.

When Queenie tries to get in Newt’s mind via legilimency, she learns the name of a witch he had feelings for at Hogwarts: Leta Lestrange. While we can’t know for sure whether his lost love is related to Bellatrix, Voldemort’s right-hand witch, it’s a safe bet that she is. Given Newt’s Hufflepuffian nature, it’s hard to imagine him being connected to the Death Eaters, even peripherally. But it’s also difficult to believe that Rowling wouldn’t introduce such a notorious name into the Fantastic Beasts fray if there wasn’t a bigger story at play.

One of the most enchanting parts of Fantastic Beasts and Where to Find Them is watching how magic and the Wizarding world worked in days gone by. The Harry Potter prequel is set in the Jazz Age. And while the dapper costumes and beautiful set pieces are lovely to look at, they do distract from a crucial clue that the movie’s timeline offers up. The film is set in 1926, which isn’t a date that holds an immediate significance for HP fans. But those who know their Hogwarts history forwards and backwards probably picked up on the fact that Newt Scamander’s adventures weren’t the only momentous occasion that year.

Tom Riddle — aka Voldemort — was born in 1926. And while that could be a coincidence, it’s also just as likely that it’s a quiet signal that the Dark Lord could factor in to the Fantastic Beasts franchise.

The Harry Potter film franchise had its ups and downs — but there was at least one element that remained both fantastic and consistent: its score. John Williams helped bring everything from Privet Drive to Hogwarts itself to life — and created one of the most well-known and beloved movie themes of all time. “Hedwig’s Theme” is as much a part of the Harry Potter story as the young Wizard’s signature glasses. It’s equal parts uplifting and mysterious — and though it wasn’t immediately obvious, it did show up in Fantastic Beasts, too.

The newer film’s opening music bears a striking resemblance to that of its predecessor. Composer James Newton Howard honored the first few bars of Williams’s iconic tune with his own Fantastic Beasts theme, creating an auditory connection between the two franchises. Though Howard’s song is considerably louder, and more stirring, it’s also unmistakably Potter-esque.

He was a dark wizard long before anyone even knew Lord Voldemort’s name and Gellert Grindelwald was a major figure in Dumbledore’s life. But his role was significantly reduced in the film adaptation of Harry Potter and the Deathly Hallows. So when he showed up in Fantastic Beasts, the connection between the two stories may not have been immediately obvious to everyone. But Grindelwald, who disguised himself as MACUSA security officer Percival Graves for most of the film, has deep roots in the Harry Potter world. He was one of the first wizards to hunt down the tools for immortality that would eventually seduce Voldemort. And given that the new franchise will be following Grindelwald’s adventures, it’s safe to assume that we’ll see even more Harry Potter connections in future Fantastic Beasts films.