Weird Video Games With Bizarre Controls: Are They Worth Playing? 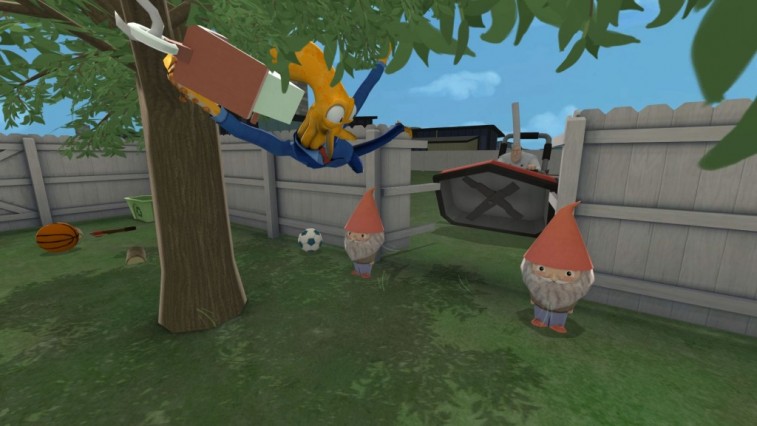 We all know there are some really weird video games out there. Some will through you into a really strange plot, others will just be full of random silliness. But among them is a particular breed of strange video game that has been growing up bit by bit. That breed is video games that have you controlling strange things with really, really, really wonky controls. You may have encountered a few yourself. If you haven’t yet, you probably will soon enough, because they’re getting a bit more prominent.

One very early title that could almost fit into this genre (and maybe play a part as inspiration) is Jurassic Park: Trespasser. While the game has you control Anne, a normal woman as she explores the island of Isla Sorna looking for a way to escape after her plane crashes there. What sounds like a run-of-the-mill game turns out to feature one striking gameplay mechanic: you can control Anne’s right arm. While most of the camera is fixed like that of a first-person shooter, Anne’s right arm is controlled independently of the camera, making for some curious interactions with items, weapons, and the environment. You can see what that’s like here. It would be a while before more games in this vein started to show up, but when they do, the similar feel is clear.

The idea of a lot of these games (don’t worry, we’ll get into specific games soon enough) isn’t so much to focus on making an incredibly compelling game with an awesome story. Instead, the focus appears to be on the absurdity. The controls are so unwieldy that the ensuing inanity is where one derives pleasure in playing the game. If there is a plot, it will likely be far-fetched and absurd — if it weren’t, players would probably get frustrated by the insanely difficult controls because they’d make it hard to move the story along.

If you’re still unsure what these games are like. All it takes is a quick peek over at Foddy.net to get an understanding of this phenomenon. QWOP should be your starting point. In it, you control the calves and thighs of a running, individually. While a typical game would have you hold the right button to run right, QWOP forces you to figure out the right sequence of muscles movements to get the character running (and it’ll take you forever). QWOP is an early entrant in the weird and wonky game trend. Many of Bennet Foddy’s games are a fit, in fact, but he’s not the only one making these games. The trend, like a virus, seems to be catching on.

Coffee Stain Studios’s surprise hit Goat Simulator shows how popular these types of games can be. It’s available on Xbox One, 360, Android, iOS, and PC. In it, you run around a sandbox world as a goat, ramming stuff, or latching onto them with an insanely long and sticky tongue. The insane tongue paired with broken physics let gamers have hours of zany fun. And that’s all the game needs to do. It’s a break from the typical video game.

Some games have gone even deeper. Octodad has players controlling an octopus who is trying to pose as a human father and not get found out for what he really is. The catch: Octodad’s tentacles are ridiculously difficult to control. The game often has you performing the most mundane tasks, like making coffee, but dealing with Octodad’s noodle arms makes everything a grueling challenge. And with “Very Positive” status on Steam, it’s proven incredibly fun (and incredibly frustrating).

A few games isn’t enough to establish a trend, but the story doesn’t end at QWOP, Octodad, or Goat Simulator. Bossa Studios seems almost dedicated to this emerging genre, with two games in the category: I Am Bread and Surgeon Simulator.

Surgeon Simluator has gamers control the arm of a surgeon — one finger at a time. Manipulating your surgical tools will more often result in ripping out all of a patients organs and sending them flying about the operating room. Trying to put them back in is equally challenging. But that’s what’s fun about a game like this. The challenge presented by having too fine of control.

I Am Bread combines the fine controls with the oddity of controlling a slice of bread, making it a standout example of this type of game. In it, you control each corner of a slice of bread and simply screw around the house in attempt to get toasted and delicious. Rather than having health, your slice has edibility. With several game modes (including a zero gravity one with a new set of wonky controls added in) and different types of bread, this game keeps the inanity peaked.

All of these games might score only average ratings from gamers and critics (unless they’re Steam users) on account of the controls being terribly frustrating and some people not having the patience or personality to find pleasure in them. Nonetheless, we can surely expect to see even more of them in the future, whether they come in a more refined form like Grow Home or Fallman or in their truly raw form, as I Am Bread and Octodad do. Why? Because people get a kick out of absurdity, and some enjoy the struggle of mastering nearly impossible-to-master controls.

Know any other games that fit this genre? Tweet them to me @WallStMarkSheet.