What Does Portia de Rossi’s ‘Scandal’ Casting Mean for Season 4? 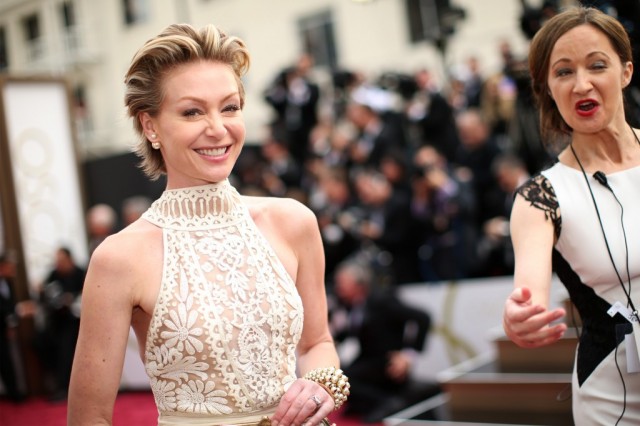 Scandal fans have been anxiously waiting to hear any new details of the upcoming season since season three’s explosive finale back in April and now they’ve finally gotten their wish. According to Entertainment Weekly, Portia de Rossi will be joining the ABC smash hit show for a multi-episode story arc during the series’ fourth season, premiering on September 25.

De Rossi’s wife and fellow Scandal fan, Ellen DeGeneres was actually the first to announce the news, taking to Twitter to proudly brag about the casting. “So annoying when people brag on twitter & that’s why I’m not tweeting that Portia just signed on to do a top secret arc on ‘Scandal.’ Oops,” she wrote about her wife’s new gig. The message was then retweeted by the show’s creator Shonda Rhimes (also the mastermind behind Grey’s Anatomy.)

Of course, in true Scandal style, we know basically nothing about the new role or how de Rossi’s character will fit into the plotline. The Arrested Development star, for her part, has yet to comment or even confirm the news, but that obviously hasn’t stopped Scandal’s dedicated fans from speculating on whom she might be playing.

Loyal viewers of the political drama will remember that last season ended with Olivia Pope (Kerry Washington) falling back into the arms of Jake (Scott Foley) and the two flying off into the sunset while her longtime Gladiator, Harrison (Columbus Short), is seemingly killed at the hands of her own father (Joe Morton). Meanwhile, Fitz (Tony Goldwyn) has been re-elected for another four years as President of the United States after the death of his son.

Since the finale, Rhimes has confirmed to The Hollywood Reporter that Short’s character Harrison was indeed killed and that season four will see Olivia and all of her Gladiators, particularly Abby (Darby Stanchfield), trying to cope with his death. She also revealed that viewers would be “surprised” by where Olivia and Jake end up and that Papa Pope would definitely be back next season, as command of B-613 army.

So where might de Rossi fit into all of this? Some fans are hoping that she’ll come in as a new B-613 killer. Given that Olivia’s father is back in charge and that B-613 is likely back on the rise because of that, it’s certainly a plausible option — and a juicy one at that. Another possibility could be that de Rossi is playing a political figure or client in need of Olivia’s problem-solving expertise, like Lisa Kudrow’s guest role last season. Though recent seasons have focused less on the individual cases at Pope & Associates and more on cross storylines, Rhimes said this season will return more to the original “case of the week” format of the show and de Rossi’s character could be a good reintroduction to that.

Whatever the case is, it’s an exciting addition to the Scandal team, especially given all of the deaths last season. Plus, it may help cheer up the many Scandal viewers left crushed after Rhimes’ recent confirmation that the show will not be going past season 8. That means only four seasons after the upcoming one — plenty of time for more satisfying, heart-stopping drama.