What Is Andrew Luck’s Net Worth, and Will He Finally Live Up to the Hype?

The Indianapolis Colts have made it to the postseason for the first time in 4 years, and at the helm is their fearless leader, Andrew Luck. In 2011, as Luck finished his sophomore season at Stanford, recruiters considered him as the most draft-ready college quarterback.

Many argued that he’d be the first overall pick in 2011. While Luck’s star was rising, he wasn’t yet ready to leave the hallowed halls of the Ivy League oasis. Instead of entering the draft, Luck returned to Stanford for his junior year. He did enter the draft that year, and remained the top prospect, being picked first overall by the Colts.

Luck was touted as the team’s savior after the departure of Peyton Manning, but the now 29-year-old star hasn’t exactly dazzled just yet. This, however, could be the year that he finally lives up to his hype. 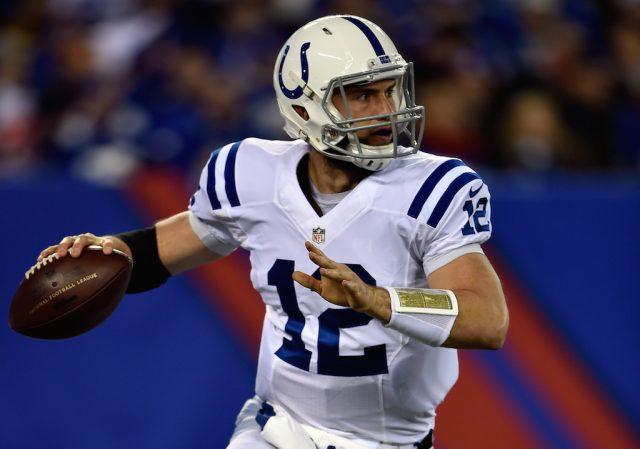 Luck has gotten a lot of flack for not steering the Colts to the postseason with success, however, the man who transformed Stanford’s football program certainly has had an impressive career. During his rookie season, Luck broke the rookie quarterback passing record, tallying over 4,000 yards during the regular season. He amassed 11 wins during his rookie year, a record for rookie quarterbacks drafted first overall.

During his second year in the league, Luck led the Colts to an 11-5 record. They finished second in the AFC South and went on to face the Patriots in the playoffs. During the 2014 season, Luck and the Colt’s once again finished the season with a winning record and went on to lose in a conference championship game.

Cracks began to appear in 2015, with the team finishing 8-8 on the season, and missing the playoffs entirely. By 2016, the team and Luck were not faring much better. They completed the season with an 8-8 record, again missing the playoffs. Many people wonder if maybe Luck wasn’t all he was cracked up to be. After all, the teams savor had yet to secure the Colts a Super Bowl spot in his first four seasons.

Luck underwent surgery during the off-season to repair damage to his throwing shoulder. The team assumed Luck would be ready to take to the turf for the 2017 season, but it was not meant to be. The quarterback missed the entirety of the 2017 season, and the team finished with a losing record for the first time since 2011.

Is Andrew Luck ready to live up to expectations?

While Luck has disappointed some, he has some seriously impressive stats, and 2018 shaped up to be an impressive one for the 6th year quarterback. During 2018 Luck led his team to 10 wins and 6 losses. He threw for 4,593 yards and 39 touchdowns. He had a pass completion rate of 67% and tossed just 15 interceptions over 16 games.

Now the team is heading into a wildcard game against the Houston Texans. While the Texan’s play-caller, Deshaun Watson smashed numerous records during his rookie year in 2017, many believe Luck has finally hit his stride and will steer his team to success. This could very well be the year that Andrew Luck finally lives up to his hype and earns his massive paycheck.

What is Andrew Luck’s net worth?

Focused on 1-0 this week. #DALvsIND

Andrew Luck has earned nearly $100 million over the first six seasons of his career. The Colts’ play-caller signed a $140 million dollar contract in 2016 that, at the time, was the richest NFL contract in history. He has since been eclipsed in earnings, but he remains the highest earner on the Colts’ roster. Luck made $24.4 million dollars in 2018, nearly double the salary of the second highest paid player. T.Y. Hilton made $13 million dollars in 2018, for comparison.

Luck is also slated to pull in $27 million dollars in 2019 as long as he remains healthy. He will be just 30-years-old when the 2019 season begins.