What Time Is Every Bowl Game on TV on New Year’s Day?

For football fans, there’s no better way to celebrate the start of a new year than by spending a day watching NCAA bowl games. While the post-season started on December 15 with the Celebration Bowl and continues through January 7 when the national champion is decided, several major ones are scheduled for New Year’s Day.

Malik Rosier #12 of the Miami Hurricanes is stopped by Andrew Van Ginkel #17 of the Wisconsin Badgers during the fourth quarter of the 2017 Capital One Orange Bowl. | Rob Foldy/Getty Images

Here’s when you can watch those three games on TV:

The winners of the Cotton Bowl and Orange Bowl will play in the college football national championship game at Levi’s Stadium in Santa Clara, California. It airs at 8 p.m. ET on Monday, January 7, 2019.

On the first day of 2019, you can ease into the New Year with a day of football. The University of Central Florida takes on Louisiana State in the PlayStation Fiesta Bowl in Glendale, Arizona, Ohio State will play Washington in the Rose Bowl in Pasadena, and Georgia and Texas will duke it out in the Allstate Sugar Bowl in New Orleans.

Here’s how you can watch each of those three games on TV:

The Rose Bowl and the Fiesta Bowl are the two must-watch bowl games this year after the semi-final games on Saturday, according to Sports Illustrated.

How to watch the games if you don’t have cable 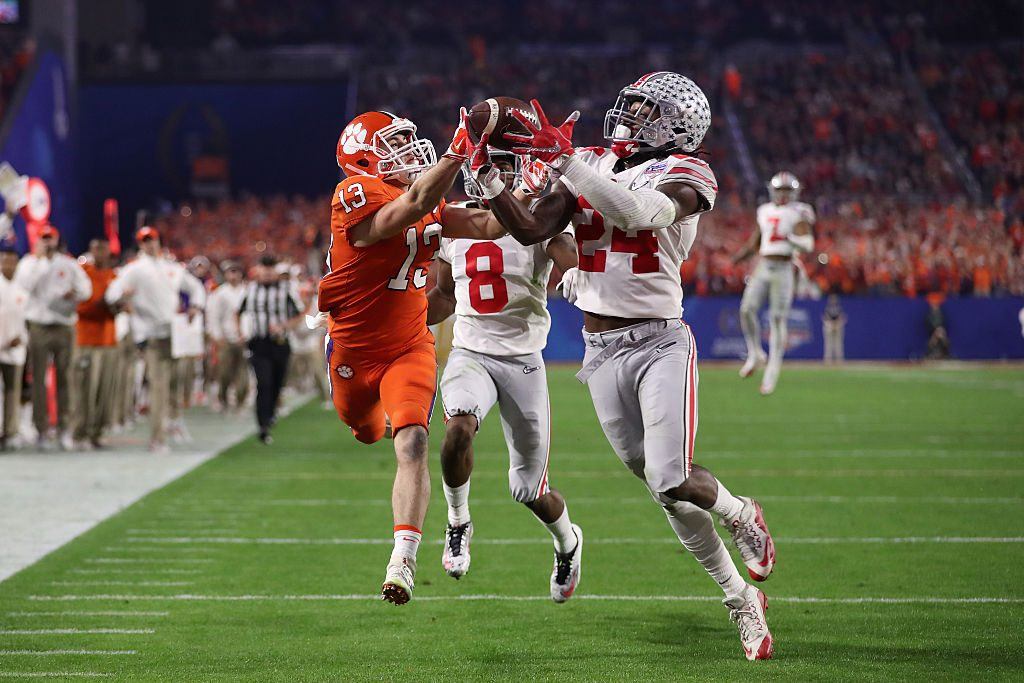 Malik Hooker #24 of the Ohio State Buckeyes intercepts a pass during the 2016 PlayStation Fiesta Bowl at University of Phoenix Stadium on December 31, 2016 in Glendale, Arizona. | Christian Petersen/Getty Images

The ESPN+ app lets you watch live sports and more for $4.99 a month. New subscribers get a 7-day free trial. Streaming TV services like Hulu Live, Sling TV, PlayStation Vue, YouTube TV, and DirecTV Now all have packages that include ESPN. If you’re signing up for the first time, you should be able to get a free trial.

Last year’s Rose Bowl, where Georgia played Oklahoma in the college football semifinal, was the fifth-most-watch cable program in history, according to Nielsen. More than 26 million people tuned in. Each of the other New Year’s Six bowl games also had record-high viewership.