What’s Next for Rosamund Pike After ‘Gone Girl’? 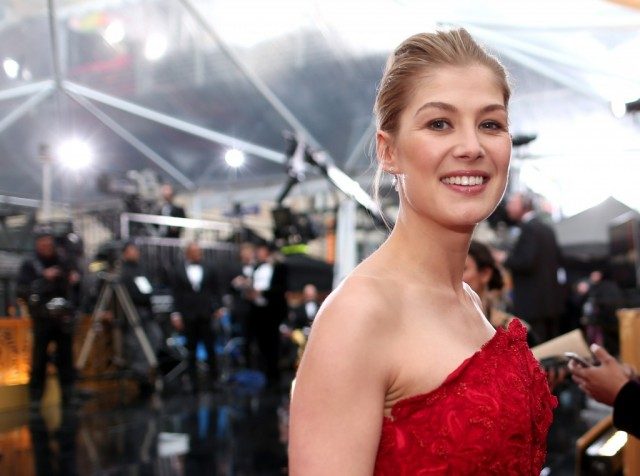 After a career-making turn in last year’s Gone Girl, Rosamund Pike has quickly become one of Hollywood’s most in-demand stars. The actress has reportedly already found her next lead role in another notable book-to-screen adaptation, The Deep Blue Good-by.

Written by John D MacDonald and published in 1964, The Deep Blue Good-by follows “salvage consultant” Travis McGee, a beach bum who makes a living recovering others’ property, usually through illegal means. The novel is the first of a 21-book series centering on the character.

According to Variety, Fox’s film adaptation already has several notable names attached. Christian Bale is set to star in the part of McGee. Meanwhile, Leonardo DiCaprio (who was once attached to star) has signed on to serve as a producer via his Appian Way banner, alongside Chernin Entertainment and Amy Robinson (Julie & Julia). Pike is reportedly in talks to take on the female lead role in the movie, although no specific details regarding her potential character have been revealed. James Mangold (The Wolverine) will direct, based on a screenplay written by author Dennis Lehane and revised by Scott Frank (A Walk Among the Tombstones).

Should she close a deal, the project would mark Pike’s first major film role since her critically acclaimed turn in Gone Girl. Though the actress has appeared in movies like Die Another Day, Price & Prejudice, and Jack Reacher over the course of her career, it’s her chilling portrayal as the beautiful and enigmatic Amy Dunne in the hit thriller that has helped turn her into a household name.

While Gone Girl became both a critical and commercial success (eventually grossing almost $370 million worldwide), it was Pike’s performance in the film that rightly garnered the most attention. The role earned the actress her first ever Oscar nod, as well as a slew of Best Actress nominations at other awards, including the Golden Globes and SAGs.

Following that success, it’s no wonder that Fox seems eager to stay in business with her. The Deep Blue Good-by isn’t the only one of the studio’s projects that Pike has in the pipeline. The actress has also already signed on to star opposite another big-name leading man, Charlie Hunnam, in the survival thriller The Mountain Between Us. The forthcoming movie, which centers on two people who survive a plane crash and are left stranded in the mountains, is also based on a novel and will be directed by Oscar-nominated filmmaker Hany Abu-Assad (Omar, Paradise Now).

In addition to her two upcoming films at Fox, Pike is also attached to the diving adventure flick, The Bends. The movie, which will star the actress opposite The Killing’s Joel Kinnaman, follows a former marine, who retrieves smuggled contraband at the depths of the ocean in service of a debt and a past not of his making. A discovery he makes in the water leads him to a woman named Helen, who is struggling to deal with her own dark and violent past.

Given her jam-packed schedule, it’s clear that Gone Girl was just the beginning for Pike. With the actress reportedly set to film The Deep Blue Good-by first, followed by The Mountain Between Us shortly after, moviegoers should expect to see plenty more of her on the big screen in the near future.