Where Is Octomom Now, How Old Are Her 14 Children?

Nadya Suleman, who now goes by Natalie Suleman, was first propelled into the media spotlight in 2009 when she gave birth to octuplets. While the world initially marveled at the medical feat, the media attention soon spiraled into the negative.

Suleman soon became a caricature of a person, dubbed “Octomom” by the media. The birth of the Suleman octuplets led to months of media speculation about Suleman’s intentions, the ethical ramifications of the children’s birth, and even the mental stability of the mother of 14.

The mass attention paid to Suleman and the octuplets waned by their first birthday, and soon Suleman turned to a short-lived career in the adult film industry to feed her brode. Drug addiction and a rehab stint followed shortly after that. Since 2013, Suleman and her expansive family have laid low. So, where are they now and how is the super-size family getting by?

How does Octomom spend time with her family?

The Suleman clan are alarmingly normal in their daily routine. Speaking to The New York Times, Suleman admitted that the entire family rises by 6:20 in the morning. The pile into a Super Duty minibus and head off to school, with Suleman at the wheel playing bus driver. The 14 children are dropped off at six different schools. Suleman than picks up the group when school lets out. They head home for homework, dinner and a nightly 8:30 p.m. bedtime. “The eight” as they are affectionately known, often help with preparing dinner. The entire family eats vegan, which Suleman believes is the reason her children rarely catch colds and other childhood illnesses.

The weekend affords the kids more indulgences and a bit of free time. Every Saturday they have a family night that includes vegan junk food and a movie or television privileges. The older kids, the first six born, weave in and out of the fold, enjoying time with friends, but also taking on a lot of responsibility for their younger siblings. Suleman admits to having severe anxiety, and eldest daughter Amerah, now 16, says her mother never takes the whole family out together. Instead, the most well-behaved kids get to go along. Allegedly, the anxiety of having everyone staring at the group is too much for Suleman most days.

Does Natalie Suleman have a job? 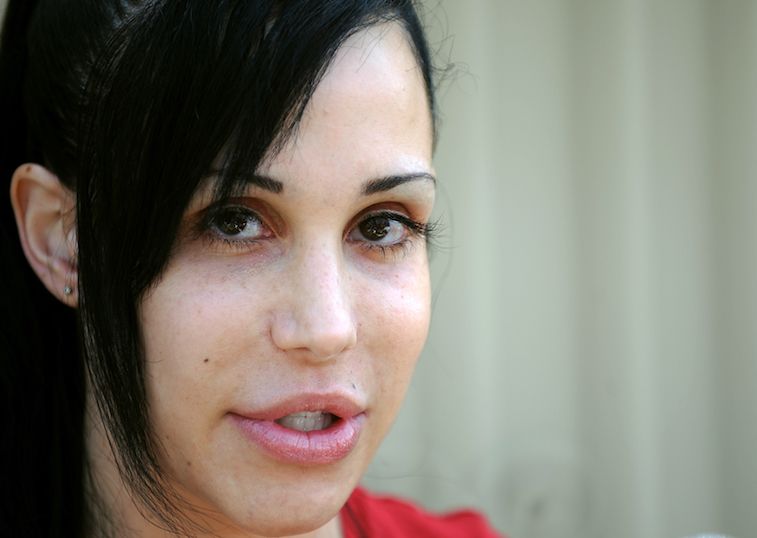 When Suleman first burst onto the media scene with a growing stomach and a football team of mouths to feed, many wondered exactly how she planned to support the growing family. Suleman had worked briefly as a counselor. She was injured on the job and received around $80,000 in disability payments. She allegedly used a family inheritance to fund her fertility treatments and IVF rounds.

After the birth of the octuplets, Suleman cashed in with interviews, but soon turned to the adult-film industry and stripping to pay to feed her family. She was also said to be collecting state benefits for her family of 14 and was later found guilty of welfare fraud for failing to disclose her full income to the Department of Social Services.

Today, Suleman has given up her stripping career and is now focused almost entirely on raising her family. She works part-time as a counselor in a drug and alcohol rehabilitation center. She also collects public assistance to make ends meet. The family’s home is your average California home. It does not have enough bedrooms for the entire crew, so the older kids sleep on couches, and they even eat in shifts at the family’s small dining table.

Suleman admits she lives paycheck to paycheck, but hopes to sell a manuscript she has been working on for years. A book deal is what Suleman seems to be after, but whether or not a publisher will be willing to bite remains to be seen. As it stands, the family of 14, while living frugally, all appear healthy, happy and well-fed.