Which Shows Are Racking Up Emmys Already? 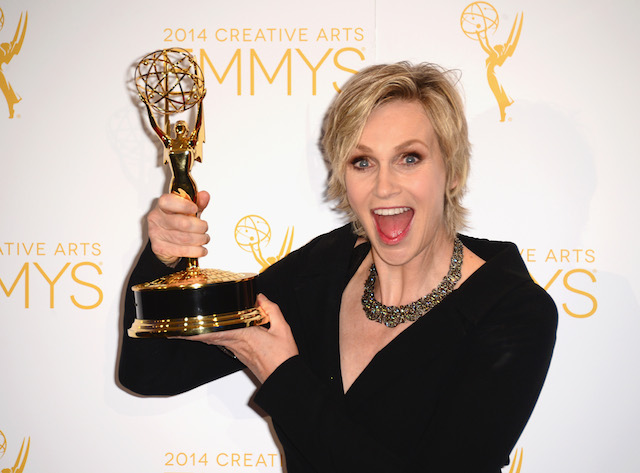 On Saturday, the Emmys handed out the less high-profile television awards at the Creative Arts Emmys in advance of the Primetime ceremony this coming Monday. Big winners for the Creative Arts awards included Saturday Night Live, True Detective, Game of Thrones, and Orange Is the New Black.

There was no one show that swept a huge amount of trophies, with Saturday Night Live coming out on top taking home five awards, followed by True Detective, Game of Thrones, Sherlock: His Last Vow, and Cosmos: A SpaceTime Odyssey with four a piece. The most exciting category of the evening was outstanding guest actress in a comedy series, which saw three actresses from Orange Is the New Black up against Joan Cusack, Tina Fey, and Melissa McCarthy. Orange Is the New Black’s Uzo Aduba ended up taking home the trophy for her role as Suzanne “Crazy Eyes” Warren on the hit Netflix prison dramedy.

The Creative Arts Emmys are important for two reasons. One, they honor the less glamorous behind-the-scenes work that is crucial for all television series and represents some fine creative achievements — the gorgeous and chilling opening sequence to True Detective comes to mind. The other reason is the Creative Arts awards can give us hints about which series are going to win big at the upcoming Primetime ceremony, which gets all the fanfare and hands out the most anticipated prizes.

One big question going into the Primetime Emmys has been whether newcomer True Detective will beat out the final season of Emmy favorite Breaking Bad in the key drama categories. It was a big upset when True Detective was entered as a drama rather than a miniseries, throwing what’s possibly the most talked-about show of the year into the ring against Emmy voters’ last chance to honor Bryan Cranston and company.

There’s fairly universal consensus that Matthew McConaughey is a shoe-in for the outstanding actor in a drama Emmy award for his role as Rustin Cole on True Detective. That performance is considered to be the best of the actor’s career, and he’s just coming off an Oscar win for last year’s Dallas Buyer’s Club. While the Television Critic’s Association chose to give its top prize to the final season of Breaking Bad over True Detective earlier this summer, True Detective’s multiple wins at the Creative Arts Emmys could indicate that the new kid on the block will beat out the old favorite at the Primetime Emmys this coming weekend.

True Detective took home the award for best casting for a drama — honestly a no-brainer given the chemistry between leads McConaughey and Woody Harrelson, as well as the southern authenticity of the supporting cast and a sexy, vengeful Michelle Monaghan giving truth to the old proverb “hell hath no fury like a woman scorned.” That award is frequently an indicator of which show is going to win for best drama, and since Breaking Bad only got one trophy the AMC series about a meth-making high school chemistry teacher might get beaten out by True Detective in the major drama categories as well.

In terms of comedies, it looks like Orange Is the New Black is poised to perform well, as the Netflix original received tons of buzz this year and has been lauded for providing some of the best portrayals of women, minorities, and LGBTQ issues on television. The large ensemble cast provided three nominees in the guest comedy actress category alone.

Taylor Schilling is nominated for outstanding comedy actress for her role as Piper Chapman, but since Piper is considered by fans to be one of the least interesting characters on the show and Schilling is facing some tough competition in the category, she’s definitely not a guarantee for the win. Critical adoration for Orange Is the New Black could land Schilling an Emmy, but Kate Mulgrew’s best supporting actress in a comedy for her role as prison cook “Red,” or outstanding writing for show creator Jenji Kohan are safer bets.

The Primetime Emmys air Monday, August 25 on NBC, so we’ll have to wait until then to see if True Detective and Orange Is the New Black turn out to be the big winners they’re predicted to be.