‘White Collar’ Finale: What’s Next for the Cast? 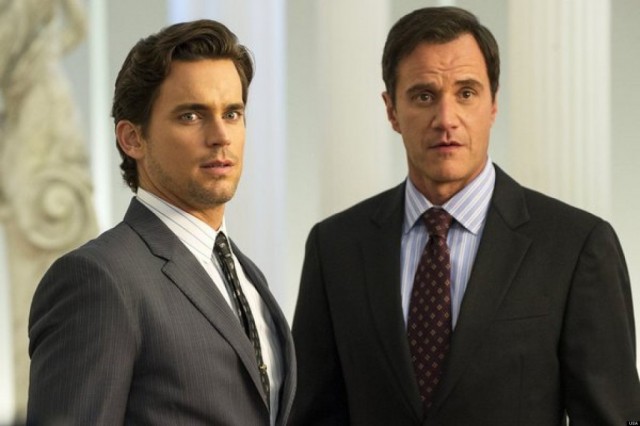 White Collar’s final six-episode run, which kicked off earlier this fall, will soon come to an official close. The show’s conclusion will mark a bittersweet moment for the loyal fan base that has followed the signature USA series throughout its six seasons. But though the series finale may mark the end of the police drama, the show’s stars aren’t fading from view. Here’s where you can catch Matt Bomer, Tim DeKay, and the rest of the White Collar cast next.

Bomer has had quite a memorable career turn in recent years. In addition to starring as the brilliant con man Neal Caffrey on White Collar, the actor made a splash as part of the male ensemble cast in 2012’s comedy-drama Magic Mike. He also earned his first Emmy nomination this year for his supporting role in HBO’s drama examining the 1980s HIV/AIDs crisis, The Normal Heart. From the looks of his jam-packed docket of upcoming projects, the actor isn’t planning on slowing down after the White Collar finale.

Perhaps the most high profile of Bomer’s forthcoming films is the much-anticipated sequel Magic Mike XXL. The actor will reprise his role as one of the male dancers, Ken, alongside other returning stars Channing Tatum, Joe Manganiello, and Adam Rodriguez. The flick, which began production earlier this fall, will follow the group of strippers as they take a road trip from Tampa to Myrtle Beach for one last blowout performance. The film is scheduled to hit theaters in July 2015.

Bomer is also involved in the upcoming DreamWorks animated flick B.O.O.: Bureau of Otherwordly Operations. The movie chronicles the story of a top-secret government agency that employs ghosts to protect humans from evil hauntings. The White Collar actor is only one of an A-list ensemble cast, which includes the likes of Melissa McCarthy, Seth Rogen, and Bill Murray, to lend his voice to a character in the forthcoming children’s movie. B.O.O.: Bureau of Otherwordly Operations was originally due out in summer 2015, as well, but was delayed earlier this month. A new release date has yet been announced.

Other notable future projects for Bomer? The actor is set to portray screen legend Montgomery Clift in an upcoming biopic, expected for release sometime in 2015. He will also co-star alongside Hollywood heavy-hitters Ryan Gosling and Russell Crowe in the 2016 Shane Black-directed crime mystery thriller The Nice Guys.

Bomer isn’t the only White Collar star to venture into new projects. DeKay, who played FBI agent Peter Burke on the USA drama, has recently booked guest roles on the ABC shows Revenge and Agents of S.H.I.E.L.D. Though his arc on the latter has reportedly already ended, it’s possible that he’ll be returning to reprise his role on Revenge now that his own series is wrapping up.

Another White Collar co-star, Willie Garson, who played con man and Neal’s close friend Mozzie, also has plenty of projects up his sleeve. The actor made a cameo in the comedy film series Periods, which consists of shorts featuring celebrities like Garson, Zachary Quinto, and Penn Bagdley.

In October, it was also announced that Garson is co-writing, producing, and starring in a single-camera television remake of the classic father-son comedy The Courtship of Eddie’s Father. The project, based on the 1969 series, has landed at Fox with a penalty attached. Garson is set to play Norman Tinker, a friend and colleague to the titular father, Tom Corbett.

Also reappearing on the television screen is Tiffani Thisesen, who played Peter’s wife, Elizabeth Burke, on White Collar. The actress starred in this month’s Hallmark Christmas-themed film Northpole. The TV movie is expected to air repeatedly over the next month as part of the channel’s annual “Countdown to Christmas” series.

While White Collar will wrap up in December, it’s clear fans will get plenty of chances to see their favorite stars from the show on screen again soon. In the meantime, White Collar’s first four seasons are also available for streaming on Netflix.