Who Will Mike Birbiglia Play in ‘Orange Is the New Black’ Season 3? 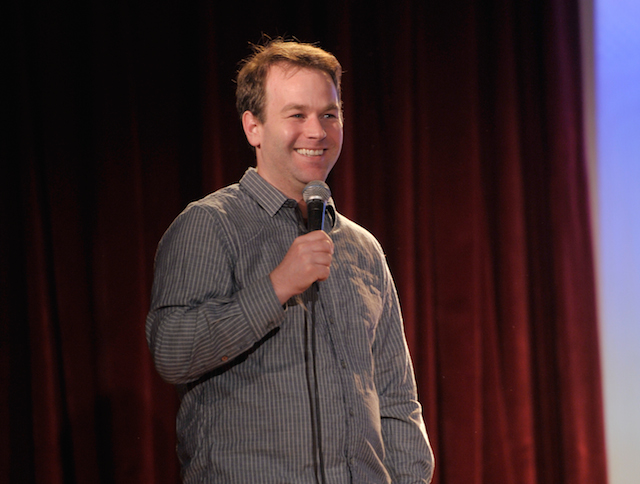 There will be a new face appearing among the gang at Litchfield prison in the upcoming season of Orange is the New Black. The actor-comedian Mike Birbiglia has been cast in the highly anticipated season three of the adored hit Netflix show.

As is usually the case in all things OITNB-related, showrunner Jenji Kohan is keeping specific details surrounding the part under tight wraps. According to The Hollywood Reporter, all that’s been revealed so far is that it will be a recurring role in a season that Kohan has described as being “about faith.”

It’s the latest notable gig Birbiglia has added to his growing acting resume. The comedian was last seen playing a support group leader in the box office smash film, The Fault in Our Stars. In addition to making an appearance in the upcoming stage-to-screen adaptation, Annie, he’s also wrapping roles in Digging for Fire alongside New Girl’s Jake Johnson, Trainwreck, directed by Judd Apatow, and the untitled Reese Witherspoon and Sofia Vergara flick previously known as Don’t Mess With Texas.

But while not much information is known about Birbiglia’s part on the series yet, that hasn’t stopped the show’s dedicated fanbase from speculating over who he might be playing. In late July, it was revealed that the show would be losing one significant character next season, with actor Pablo Schreiber not reprising his role as prison guard Officer Mendez (otherwise known as Pornstache). Now, many are suggesting Birbiglia might take his place as a new security officer.

Birbiglia isn’t the only new cast member viewers should expect to see in the upcoming season. Mary Steenburgen (30 Rock) and Blair Brown (Fringe) have also signed on for two new parts in season three. Like with Birbiglia’s character though, what exactly those roles will entail has not been revealed.

Along with the addition of several new members to the cast, the third season of OITNB also marks the full-time return of Laura Prepon’s character, Alex Vause. Though she played a lead role in the first season, she appeared in only a handful of episodes in the second season, which saw her character getting released from jail. To the delight of many fans, she has since confirmed she’ll be back in nearly every episode for the upcoming season.

Prepon’s character is just one of several set to get more screen time in the third round of the Netflix dramedy. Many of the previously featured actors on the show were promoted to series regulars after the second season, including Selenis Leyva (Gloria), Nick Sandow (Joe Caputo), Adrienne C. Moore (Black Cindy), Samira Wiley (Poussey), and Dascha Polanco’s (Dayanara Diaz). Polanco, in particular, will likely have a large role, as her pregnant character nears closer and closer to her due date. Last season left off with—spoiler—corrections officer John Bennett (Matt McGorry), confessing to being the father of her baby to the newly promoted Caputo. Unfortunately, his efforts to prove to Daya that he’s not afraid of revealing the truth backfire when Caputo—determined to keep his new job–refuses to listen to his explanation.

While we may not know much about the plot of upcoming season, it seems clear fans have a lot more drama in store for them. And with the addition of three new cast members, it looks like Litchfield is about to once again get very crowded.