A new actress has been cast to voice Leia Organa in the upcoming TV series Star Wars Resistance.

Lucasfilm released the first official trailer for the upcoming Star Wars cartoon series today, also putting out some information about the series and its cast. According to Polygon, the show will feature Rachel Butera voicing General Leia Organa. This is our first official confirmation that Leia would appear in the show.

A number of different actresses have voiced Leia in the expanded Star Wars canon, but Butera is new to the saga. She has had a wide range of voice acting experience on shows like The Adventures of Rocky and Bullwinkle, Teenage Mutant Ninja Turtles, and Tammy’s Tiny Tea Time.

Leia previously appeared in Star Wars Rebels, which takes place before the events of the original 1977 film. For this show, Julie Dolan voiced the character. Now, however, Butera will need to accurately capture the sound of Fisher’s voice in the new Star Wars films.

This won’t be the first time an actress other than Carrie Fisher portrays sequel-era Leia, though. In the video game Star Wars: Battlefront II, a different actress voiced Leia in a scene that takes place around the events of The Last Jedi, and it sounded so spot on that one might mistakenly think it was actually an old recording of Fisher herself.

It’s only natural that Star Wars Resistance will feature Leia, as the new animated series will focus on the early days of the organization that Carrie Fisher’s character started years prior to the events of The Force Awakens. Much of this was covered in the book Star Wars: Bloodline, in which Senator Organa founds the Resistance after growing frustrating with the Senate taking no action against the rising threat of the First Order. 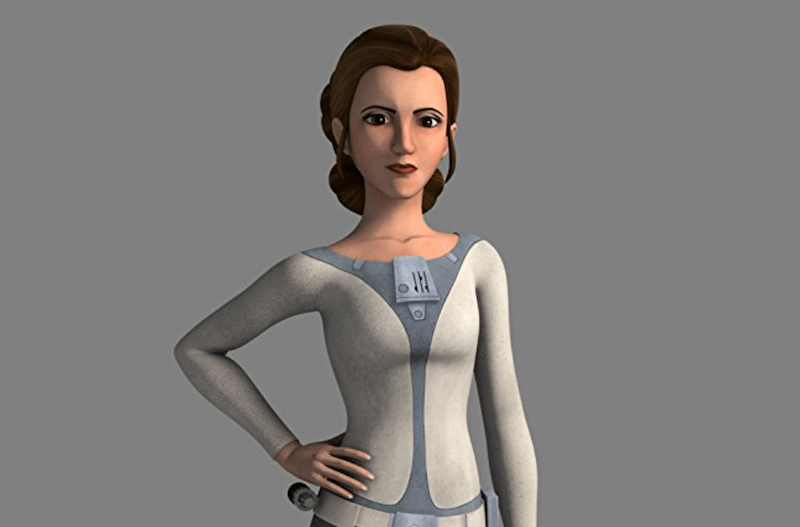 When Star Wars Resistance was first announced, some speculated that this show could actually be integral to completing Leia’s storyline. After all, the first season will take place prior to The Force Awakens, but it’s possible the show could jump forward in time during subsequent seasons, catching up to the events of The Last Jedi and Episode IX. So the theory was that Leia could die during the time jump between The Last Jedi and Episode IX, and Resistance could cover that period of time, giving Leia a proper death scene and closing out her storyline on television.

Now, however, that seems a lot less likely considering it has been annoucned that old footage of Carrie Fisher will be used to wrap up Leia’s storyline in Episode IX. Still, Resistance could help flesh out the sequel-era Leia a lot more than J.J. Abrams will be able to do with Episode IX.

Leia won’t be the only character from the films to appear in Resistance. In addition, BB-8, Poe Dameron, and Captain Phasma will show up on Resistance. In those cases, though, Oscar Isaac and Gwendoline Christie are actually lending their voices to the show themselves. It’s unclear how many episodes Poe, Leia, and Captain Phasma will appear in, though.