Why Audiences Got Sick and Tired of ‘Entourage’ 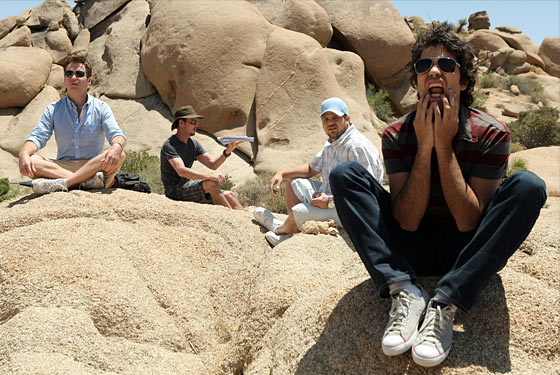 There was a time when Entourage was the toast of HBO. Loved by critics and audiences alike, it was praised as a clever, insightful romp through Hollywood, led by a posse of lovable friends trying to follow their dreams. Four years after the final episode and right in the throes of its movie debut though, and… well, let’s just say it hasn’t aged well. The premiere of the film of the same title has served as a stark reminder that for all of Entourage‘s flash, it’s more a time capsule for an outdated standard for how men are expected to behave.

Back in in the mid to late 00s when the show aired, no one batted an eye at lines from characters exhaustingly proclaiming, “this is why I hire women to blow me, not run my studio” (Season 5, Episode 11). Back when that particular line of dialogue surfaced, it was merely a drop in an ocean of overt misogyny that many of us seemed to really just be OK with. For their review, AV Club even dubbed it as “the best line of the show” for that episode. Today, our standards are vastly different, both in our portrayals of men, and even more prominently in the featuring of strong, female leads.

Look at the way things are today, and critics aren’t nearly as friendly when taking on the Entourage movie. Currently sitting at 32% on Rotten Tomatoes, early returns have been nothing short of merciless, with Deadspin even going so far as to label it a “a crass, frictionless piece of cameo-overstuffed jet trash.” They go on to dub it “the hate-watching event of the summer,” ascribing a value to it that’s less positive, and more aligned with derision as the primary motivation for viewing. Compare that to the reviews of the past, and it’s official: The world has turned on Entourage.

So what happened? The quickness of the turnaround seems staggering when you consider the popularity of the show when it aired all those years ago. In just four years though, the entertainment media has changed drastically. Both Sex in the City and Entourage, the yin and yang of horrifically inaccurate and disempowering portrayals of women and the men who court them, would never survive in today’s TV market. Shows focused on deconstructing the gender narrative of the past, like Agent Carter, Girls, and Inside Amy Schumer, have become the gold standard. Try and get a directionless homage to extravagance and objectification like Entourage on the air today, and odds are it wouldn’t get past the pitch stage.

Enter the film release, buoyed mostly by the holdover popularity the show had when it left the airwaves in 2011. People will still see this movie, regardless of its implications, that much is certain. But it can no longer escape criticism. If its paltry Rotten Tomatoes score tells us anything, it’s that our standards for how men should act (and subsequently the depth of our entertainment) have risen dramatically in the years following its finale.

In many ways, audiences have grown up. The teens who idolized Vinnie and his crew during Entourage‘s lengthy run have since been exposed to shows like Breaking Bad, True Detective, and The Walking Dead. Even our comedy has upped its game, evolving into the obscure and thoughtful meta-humor seen in Community and Arrested Development. Sadly, Entourage is a movie (and series) that in the passage of time, has looked less and less attractive to modern audiences. Entertainment has evolved, while HBO’s former hit has found itself stuck back in a time when we simply didn’t demand much from our TV-watching experience.