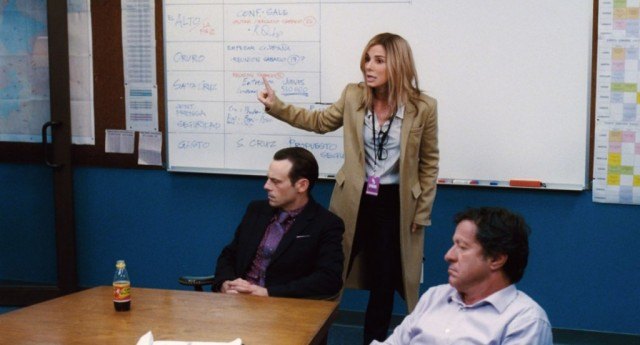 Halloween weekend was not good to Sandra Bullock and Bradley Cooper. Both of the stars’ latest films, Our Brand Is Crisis and Burnt, crashed and burned at the box office, continuing what has been a truly dismal month for feature films.

According to The Hollywood Reporter (THR), the holiday weekend earned a total domestic box office of only $74 million, making it the worst-grossing weekend of the year so far. With Halloween falling on a Saturday and the highly anticipated new Bond film, Spectre, set to open the following week, the weekend was already expected to be a fairly slow one for movie theaters. Even so, the domestic box office numbers ended up proving far worse than anticipated, especially with new releases coming from two of Hollywood’s top stars.

Burnt, directed by John Wells and starring Cooper as a chef trying to make a comeback, opened to a measly $5 million from 3,003 locations. That places the Weinstein Co. release at No. 5 this week, falling behind The Martian (which managed to nab the No. 1 spot even in its fifth weekend) and other holdovers, Goosebumps, Bridge of Spies, and Hotel Transylvania 2.

Meanwhile, Bullock’s political dramedy, Our Brand Is Crisis, came in eighth at the box office, only managing $3.4 million over 2,202 screens for Warner Bros. That makes it the worst nationwide start of Bullock’s career, even falling below the $4.7 million earned by Two If by Sea in 1996.

So what exactly went wrong? Though both movies were passion projects for their stars, each earned widely mixed reviews from critics and audiences. Burnt, which cost $20 million to produce, earned a B- CinemaScore and was skewered by reviewers, scoring a 26% rotten score on Rotten Tomatoes. That makes it the second recent miss for Cooper, following January’s widely lambasted Aloha.

Our Brand is Crisis hasn’t fared any better critically. Bullock went to bat for the project, convincing the producers to make her character (originally written for a man and attached to George Clooney) a woman so that she could star in it. Despite her efforts, the movie earned a low 33% score on Rotten Tomatoes and a C+ CinemaScore.

But there’s more to each film’s failure than just poor reviews. With the exceptions of The Martian and Bridge of Spies, this whole month has been a bloodbath for new releases of all shapes and sizes. Blockbusters like Joe Wright’s Pan, Guillermo del Toro’s Crimson Peak, and Jon M. Chu’s Jem and the Holograms all delivered disappointing performances, as did prestige plays The Walk and Steve Jobs (the latter of which tanked, despite strong reviews and a high-profile promotional tour). Bill Murray’s Rock the Kasbah was another casualty, again proving that big names don’t make a guaranteed hit.

As for what’s to blame for this slew of dismal box office showings, experts are blaming an overcrowded film schedule this month and one too many prestige titles. There’s also the matter of release strategy. As THR points out, films that cater to an older audience have recently been successful starting out in limited release and then expanding slowly, like last year’s Birdman. Burnt‘s premiere plan was altered several times and the idea of opening in select theaters over time was eventually scrapped in favor of a regular expanded release. That may have ended up working against it.

But while Burnt and Our Brand is Crisis may have been the most surprising of the Halloween weekend’s flops, they weren’t the only new releases to tank. Sony’s Truth, which recounts CBS’s reporting on President George W. Bush’s military service, couldn’t even crack $1 million, while Scouts Guide to the Zombie Apocalypse grossed just $1.8 million.

Luckily, things will likely turn around soon. Several anticipated blockbusters, including Spectre and The Hunger Games: Mockingjay – Part 2, are due for release in the coming weeks, meaning November will (hopefully) be a much better month at the box office.