Why Do We Love Meta TV and Movies? 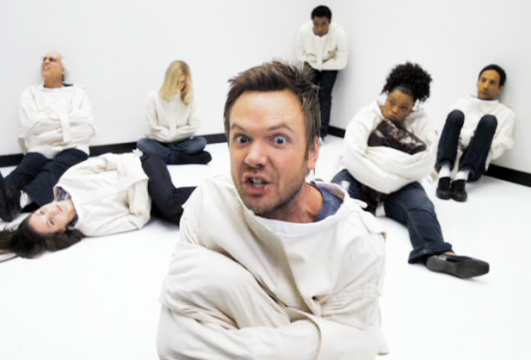 There are very few people would argue with the idea that Hollywood has become derivative. The summer blockbuster season is littered with sequels and reboots, while TV shows are constantly trying to build off of each other. But over the last few years, a certain creative form has become almost an automatic way of endearing oneself to an audience. Metacinema is loosely defined as movie (or TV show) about the making of itself, and it’s become the preferred way of circumventing the derivative nature of the modern film industry.

It’s a form that’s been around since the days of Groucho Marx, so it’s certainly nothing new. But recently it’s been utilized as a creative device for a movie or TV show to both have its cake and eat it too. Take last year’s 22 Jump Street for example. Here we had a sequel capitalizing on the 21 Jump Street reboot that ended up being wildly successful. What did they do to combat this stigma? They stuffed their movie full of self-referential jokes about sequels never measuring up to the original. You’re sick of sequels? Don’t sweat it, because the movie you’re watching is too. Everyone becomes in on the joke, and suddenly you have the type of movie you thought you hated winning you over with its overt self-awareness.

When done right, it’s an incredibly clever and effective way to sneakily have your audience sympathize with what they’re watching. The case-studies that prove this are numerous: Scream, Cabin in the Woods, Community, 30 Rock, Adaptation, and Arrested Development among others. In this, it brings with it an odd relationship between the movie or TV show and the viewer, going far beyond simply looking to be entertained.

More than anything, we want our entertainment to fulfill our wants and needs. If a movie or TV show doesn’t at least tangentially appeal to this, the truth of the matter is that no one won’t watch it. Most of the time, Hollywood attempts to do this by making their stories about one simple thing that they know people enjoy: things like superheroes, love stories, etc. What metacinema does though is take this a level deeper. It becomes about a thing people like that knows it’s about a thing people like. For movies like Adaptation, the self-awareness drills down even deeper, as a movie about a man writing a movie about a man writing a story. On paper it’s enough to make your head hurt, but when executed properly it can be patently brilliant.

By being self-aware, the meta approach can clearly demonstrate that it’s acknowledging and understanding the needs of an audience. In many ways it’s speaking directly to the audience with the clear message that in a world of entertainment becoming all too similar, we all can be in on the fun. The fourth wall becomes more of a window, with the fictional characters inside of it acting all-too aware that they’re speaking not just to each other, but to you.

This trend is showing no signs of slowing down. Community, a show defined by its meta-humor, recently saw a revival online following its cancellation from network TV. Arrested Development is getting another 17 episodes from Netflix. We even have the most meta comic book character of all time in Deadpool set to have his own movie, premiering in February of next year. Metacinema has never been stronger, and if it continues to be utilized the right way, it’s the biggest weapon we have against the Hollywood franchise machine.