Why Does Meghan Markle Have to Stand Behind Kate? Royal Family Etiquette Rules the Duchess Must Follow

Royal family etiquette rules are a time a dozen, but some — like Meghan Markle standing behind Kate Middleton — are more necessary than others. But, why does Meghan Markle have to stand behind Kate at royal functions? While it might seem silly, the answer actually makes a lot of sense.

Ahead, we take a closer look at the one royal family etiquette rule that says Meghan Markle has to stand behind her sister-in-law, plus other protocols the duchess must follow.

Why does Meghan Markle have to stand behind Kate? 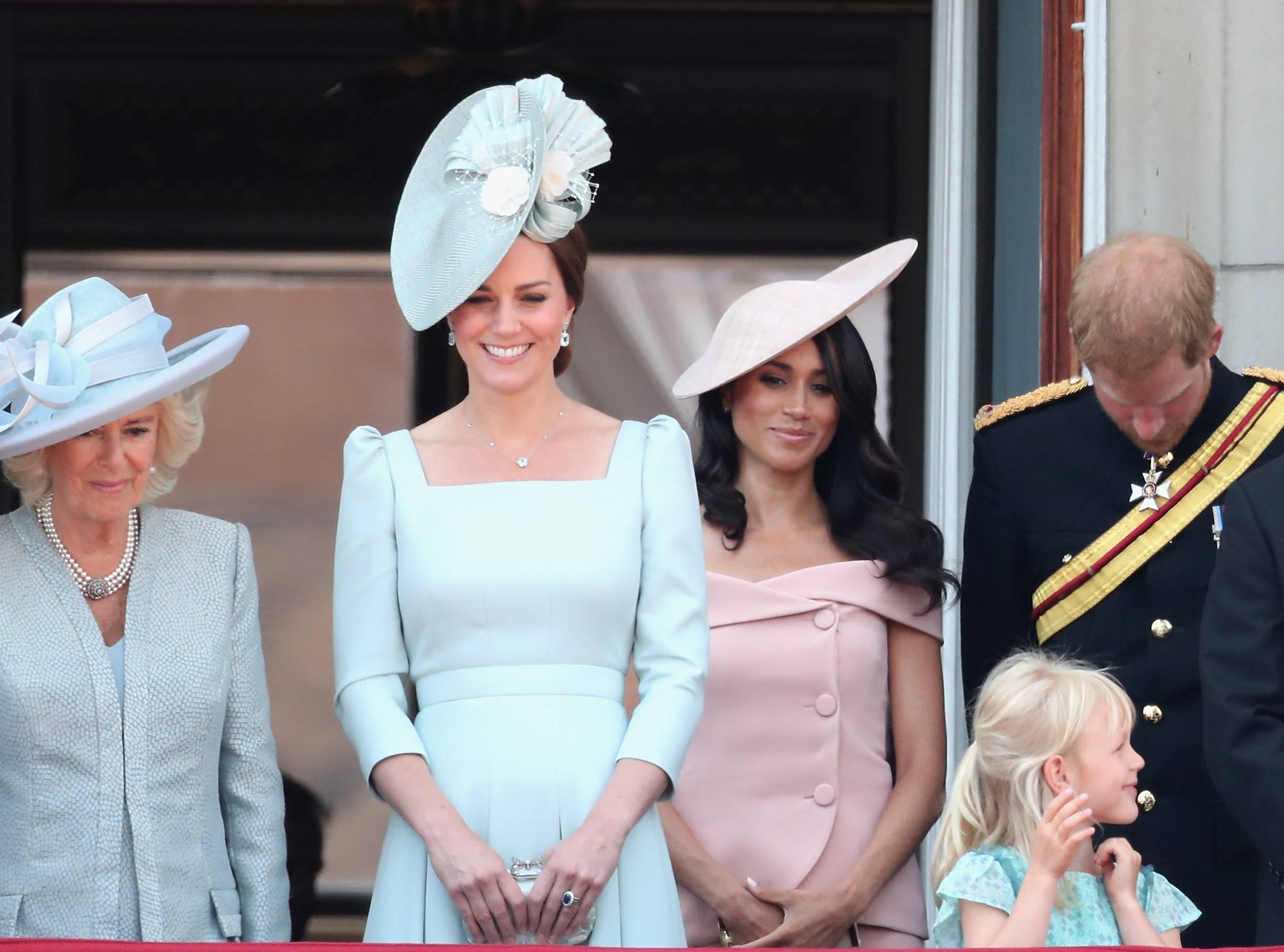 Royal fans want to know: Why does Meghan Markle have to stand behind Kate? And the reason all comes down to royal family etiquette rules. In the Mountbatten-Windsor household, everyone walks and sits in order of succession. And, even though Kate Middleton and Meghan Markle are both former commoners and of equal ranking (in terms of their royal titles, that is), they are not as equal as you might think.

Since Kate Middleton married Prince William, and he is higher up on the line of succession, the two always walk and stand ahead of Meghan Markle and Prince Harry. That’s why you often see Meghan Markle slightly behind the Duchess of Cambridge during those iconic balcony shots.

The queen loves a good rulebook and the royal family etiquette rules are some of the ones she is strictest about. From how to properly eat food (yes, there’s a “right way” in the royal family) to the exact angle tiaras must be worn, here are all the etiquette rules Meghan Markle has to follow in addition to standing behind Kate at family affairs.

Curtsy to the queen

One of the most important royal family etiquette rules is greeting the queen correctly. All members of the family must curtsy to Her Majesty upon first greeting. Royals typically practice a swift, subtle curtsy — but a deeper, longer hold is considered more respectful.

Cross your ankles when seated

Royal women are not allowed to cross their legs over their knees when they sit. However, comfort is still allowed, so if Meghan Markle or another royal woman wants to cross her legs at the ankles, that’s okay with the queen. Kate Middleton typically crosses her ankles and tilts her legs to the side, a move that has been coined the “duchess slant.”

Don’t look down when walking down stairs

Walking downstairs in an appropriate manner is equally as important as crossing your ankles when you sit. Meghan Markle and her female family members must walk downstairs gracefully, with their chins parallel to the floor (no looking down!). Their husbands an offer an arm to help prevent any mishaps.

The royal family style rules are no joke. In fact, Meghan Markle has allegedly been told she needs to “stop dressing like a Hollywood star and start dressing like a royal.” According to the queen’s guidelines, royal women must dress modestly — that means no low-neck ensembles, spaghetti straps, and other revealing garments. In addition, they have to wear pantyhose. They also cannot wear wedged heels when the queen is present (she reportedly hates them).

Do not stab your food

Dining etiquette is a huge part of being a royal. If Meghan Markle eats with the queen (or any other royal for that matter), she can’t stab her food with a fork and must always hold utensils in the correct hands. Knives go in the right hand and forks go in the left. To bring food to the mouth, royals balance a bite on the back of their fork, using their knife to keep it from falling.

Wear your tiara the right way

In the royal family, only married women are allowed to wear a tiara. And there are (of course) rules to follow. For one, royal when only wear them to formal evening events. In addition, they must wear a tiara at the right angle. According to the royal family style rules, if you are looking from the side, they must be placed at a 45-degree angle.

Sticking your pinky out while drinking tea is high class — but even too stuck up for the royal family. Pinkies must remain inward and the thumb and index finger hold the handle while the middle finger rests on the bottom of the cut. On top of that, royal must sip from the same area to avoid marks or lipstick stains around the glass.