Why Hollywood Is Making This Controversial Book into a Movie 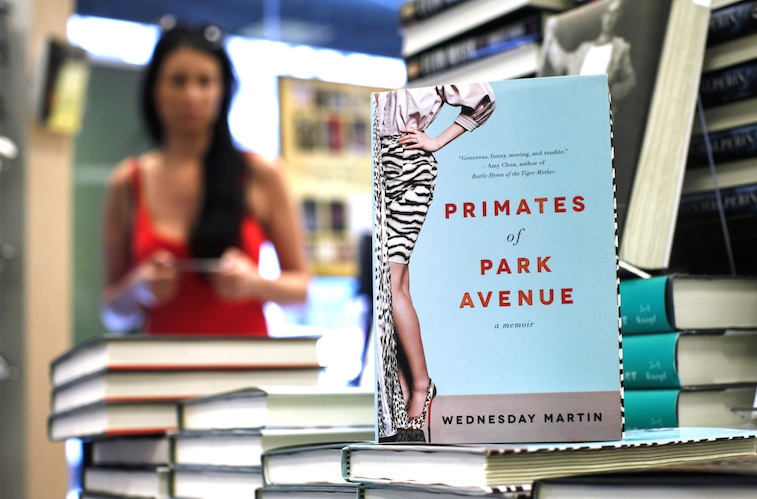 The Primates of Park Avenue is one of the most controversial “memoirs” to come out in recent memory. The book claims to take a look at the privileged stay at home moms of the Upper East Side and their culture practices with the eye of an anthropologist rather than the camera of a reality show, and this lens has proven no less intriguing for viewing the women of the 1%. Its popularity has once again proven the American public’s appetite for hearing about bitchiness is endless.

Author Wednesday Martin looks at these women through her own experiences living among them during the six years she spent in the small, elite neighborhood. Now across the country Hollywood thinks these women would make for a good movie, with The Hollywood Reporter reporting that MGM has purchased the rights for the book.

Primates of Park Avenue has an appropriate endorsement from another controversial memoirist on the cover, Amy Chua of Battle Hymn of the Tiger Mother fame. One of the most talked about aspects of the book has been the phenomenon of some women receiving a “wife bonus” from their husbands, who make all of the money in their multimillion dollar households. Martin wrote an op-ed in The New York Times about this strange cultural practice, which sees husbands giving their wives a cash bonus at the end of the year if they’ve done a good job with their wifely duties like getting their kids into elite private schools and managing their multiple homes.

In Primates, Martin also talks about the obsession these women have with designer clothes, bags, and furniture as well as spending untold sums on maintaining their personal appearance through trendy diet and exercise regimes. Martin describes the culture shock she felt upon entering this world when she thought she was just moving across town and how she eventually engulfed herself in it, partially to fit in and partially to write about these super rich women who live as if feminism never happened.

Almost as soon as the book came out, controversy around it exploded not just for the content about these women’s weird lives, but also for the many allegedly false claims Martin makes that have been unearthed by journalists. The New York Post published a scathing report saying that Martin exaggerated the amount of time she lived on the Upper East Side, misrepresented the time of her various pregnancies (which is crucial given that her children and being a mom was her way into the world of the women she writes about), and misstates when certain businesses existed in the neighborhood.

Additionally, press for the book emphasized the fact that Martin has a Ph.D. and she refers to her studies of anthropology constantly, but her Ph.D. is in comparative literature, not anthropology. In response to all this, Simon & Schuster will add a note in future editions saying that, “It is a common narrative technique in memoirs for some names, identifying characteristics and chronologies to be adjusted or disguised.”

While all of this might irk someone with a scholarly background or a mother living on the Upper East Side who maybe doesn’t subscribe to the practices Martin lays out in the popular book — it’s been on multiple bestseller lists since it was released — Hollywood doesn’t care about any of that. A story like this has the potential to be comic or dramatic and people are always interested in peering in on how the ultra-rich live, with the assurance that with all that money comes some sort of moral inferiority. The movie version will probably be like a big-screen, more serious take on the Real Housewives reality series with a twist of Mean Girls.