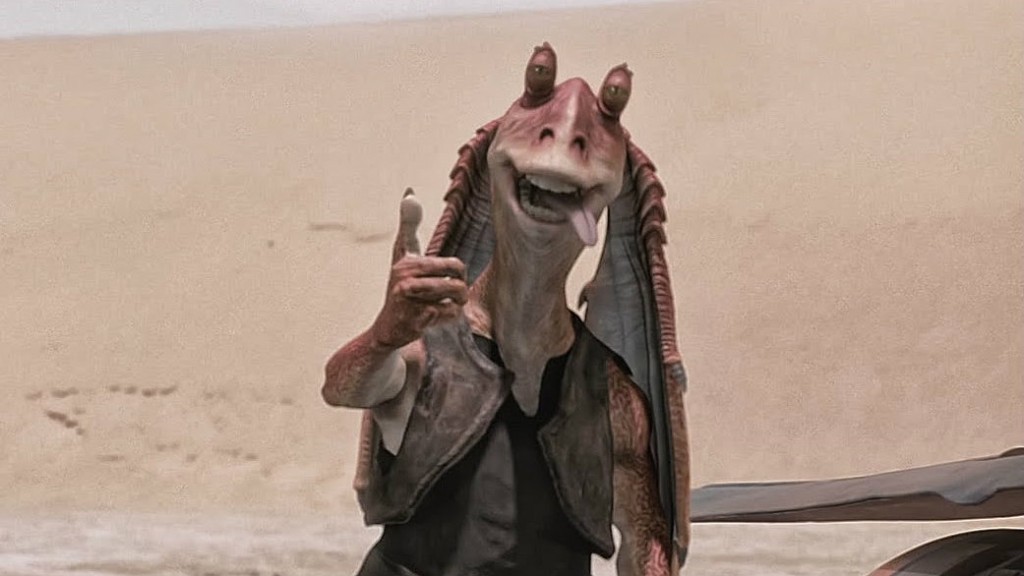 In the days leading up to the release of The Force Awakens, fan theories ran rampant concerning a number of mysteries. We knew little, if anything, about the general story, and there were tons of questions yet to be answered. Of all the theories posted over those months, none were more popular than the one concerning the real identity of Jar Jar Binks. According to one observant Reddit user, the theory goes as follows: Jar Jar Binks was in fact a Sith in disguise, and his slapstick behavior was all an elaborate cover. It goes even further to say that this was Lucas’s intention all along, and that he may have backed off after fan backlash following The Phantom Menace.

We won’t dig too deep into the massive essay containing additional proof, evidence, and videos, but trust us when we say, this person makes a convincing case. Lucas has often derided fans for their opposition to his vision, and there’s a convincing argument to be made that he made significant changes to Attack of the Clones to appease people. Just as intriguing in the wake of all this has been the across-the-board acknowledgment that as insane as this theory may be, it seems entirely possible. This is driven by two factors: 1. Everything we know about George Lucas’s vision for the prequels, and 2. We want to believe this is true.

The first of these two reasons is easy enough to break down. Count Dooku’s sudden appearance in Episode II seemed too random to have been planned from the beginning, leading us to believe that Darth Jar Jar could have been hastily replaced after the across-the-board vitriol from fans. It’s also worth noting that Lucas himself has been quoted as saying that Jar Jar was a key cog in tying the whole prequel trilogy together. There’s plenty of evidence out there that lends credence to a Reddit theory that on its surface, seems absolutely bonkers.

A scene from The Phantom Menace. | Lucasfilm

But could it be that we want to believe it’s true more than it actually is? There’s no doubting that the prequels never quite lived up to the original trilogy, and to this day, fans still lament over what could have been. If the most hated character in the entire Star Wars mythology was supposed to be a part of the greatest reveal this side of “I am your father,” suddenly there’s redemption to be had. If the Darth Jar Jar theory ends up being true, then George Lucas actually had a solid plan all along, and we were all wrong to doubt him in the first place.

What’s more likely, though, is that Lucas was given full control over the Star Wars story for the first time ever with the prequels, and he made a mistake with Jar Jar. In an interview with BBC right after the release of The Phantom Menace, Lucas lamented about “a group of fans for the films that doesn’t like comic sidekicks. They want the films to be tough like Terminator, and they get very upset and opinionated about anything that has anything to do with being childlike.” The “comic sidekick” he refers to is of course Jar Jar Binks, and it’s clear from this that his aim wasn’t anything as complex as the meticulously orchestrated reveal the Reddit theory outlines.

A wrinkle was thrown into the mix recently, with recent statements from Jar Jar actor Ahmed Best casting some doubt over detractors. When asked about the theory, he cryptically responded, “There’s a lot about it that’s true. There are some things about it that are not true. Could Jar Jar have evolved into that? The answer is ‘yes.’ Lucasfilm backed off of Jar Jar a lot. Was there an official Darth Jar Jar in the works? That’s a George Lucas question.” It certainly raises some questions, although in the end, only Lucas knows for sure.

A lot of our belief of the Darth Jar Jar theory is centered around the fact that it’s an infinitely more appealing story than the one we got with the prequels. If he was indeed a covert Sith Lord working against our heroes from the beginning, then it paints a much more positive picture in hindsight of what the prequels could have been. We’re now over a decade removed from Jar Jar’s first appearance, and with The Force Awakens opting to not dive any further, it’s safe to say it’s finally been put to rest.

The debate over Jar Jar Binks’s true nature and ultimate fate may have finally been settled. In Star Wars Aftermath: Empire’s End — the new canon  Star Wars novel that hits store shelves on February 21 — Jar Jar makes a brief and somewhat depressing appearance as a shunned street clown on his home planet of Naboo.

A scene from Star Wars: The Phantom Menace. | Lucasfilm

Per a description of the novel provided by io9, Jar Jar entertains refugee children arriving on the planet, performing his typical goofy shtick. When one of the children asks why none of the other Gungans talk to him, Jar Jar says:

Mesa thinks it cause-o Jar Jar makin some uh-oh mistakens. Big mistakens. Der Gunga bosses banished me longo ago. Mesa no been to hom in for-ebbers. And desa hisen Naboo tink I help the uh-oh Empire.

In other words, it seems that even within the Star Wars universe, Jar Jar’s fellow Gungans hold him somewhat responsible for the rise of the Empire — albeit unintentionally. Apparently, that is enough reason for the Gungans to still ostracize their former representative to the Galactic Senate. Or perhaps they just got tired of his slapstick antics.