Why You Should Be Watching ‘Portlandia’ 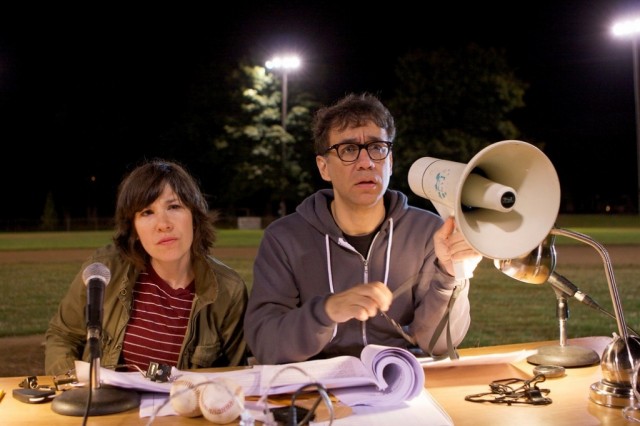 Carrie Brownstein and Fred Armisen’s delightfully kooky sketch comedy series Portlandia has been renewed for two more seasons on IFC, according to Deadline, and the fact that the network is confident enough to take a show about the citizens of Portland into seven seasons is just another sign that you should be watching the series if you aren’t already.

One of the major factors that makes Portlandia so great is that Brownstein and Armisen are like comedy soulmates. Brownstein described their relationship to Elle magazine as “one of the most intimate, functional, romantic, but nonsexual relationships [they have] ever had.” They create, write, and star in Portlandia, which began as a web series from the two-person comedy troupe they called ThunderAnt. Several of Portlandia’s most famous sketches, including the owners of the feminist bookstore Women & Women First, started as ThunderAnt skits.

Brownstein is famous not for acting or comedy, but for being the guitarist and one of the founding members of the all-female alternative band Sleater Kinney. That group was highly influential during the ’90s and early 2000s and Brownstein has even been named one of the most underrated guitarists of all time by Rolling Stone. Her success in both music and television comedy has led more than one interviewer to ask if there’s anything she can’t do. Armisen got his start on Saturday Night Live and is also a musician. He’s played drums in several different rock bands and is currently acting as the bandleader for The Late Night with Seth Meyers house band.

Both Armisen and Brownstein live in Portland and use the city and its inhabitants as a lens for their observational comedy. At first it might seem like a sketch comedy show about Portland is too local to appeal to a wide audience, but because the artsy hipster culture that’s so prevalent in Portland has become a nationwide trend, the characters that Armisen and Brownstein skewer on the show are recognizable to almost anyone. From feminist book store proprietors to young overly principled hipsters to shops selling anything artisanal or organic, any city in the country has an enclave where you can find the stereotypes on Portlandia.

And even if you’re from a small town where these things seem a bit foreign, Brownstein and Armisen are just funny. They create hilarious characters by donning ridiculous wigs and outfits and switching genders and all that humor is enjoyable even if you don’t see those characters at your local Whole Foods on a weekly basis.

The fifth and most recent season of the show has gotten some of its best reviews yet. If people didn’t expect a sketch comedy show about Portland to work in the first place, they definitely didn’t think it would go on for this long. But Season 5 currently has an 84 Metascore on review aggregator Metacritic and boasts guest appearances from Paul Reubens, Anna Gunn, Seth Meyers, Jeff Goldblum, Steve Buscemi, Greta Gerwig, Olivia Wilde, Kyle MacLachlan, Kumail Nanjiani, Natasha Lyonne, Paul Simon, Parker Posey, Jane Lynch, and Oscar the Grouch, some of whom are new to the show and some of whom have made appearances from the beginning. Getting surprising and impressive guests to do unexpected roles on the series has always been one of its strong points and as it gains clout Armisen and Brownstein will be able to convince more interesting people to appear.

“Both [of the first] episodes are so solid and done with such polish, they’re reason to think that Season 5 of Portlandia may be the best one yet,” said The Oregonian. The fifth season has taken to exploring one pair of the show’s characters for an entire episode and diving deep into their backstories to explain how they got to Portland and why they are the way they are. Critics are saying the method works. “Rather than break down each episode into sketches, each episode is its own, contained sketch, focusing on one particular set of characters and their stories. It makes Portlandia a lot easier to watch — and a bit more profound, too,” said Salon. Portlandia has never been anything if not deeply experimental, unafraid to take big risks that sometimes can fall flat but more often pay off with equally big rewards.

There aren’t any other shows on TV quite like Portlandia, and originality isn’t exactly something that comes in spades on network television. If you’ve been looking for a smart, funny show made by smart, funny people, then don’t think you need to live in Portland or an equally “hip” city to appreciate Portlandia’s humor.