Will All Five of the ‘Game of Thrones’ Spinoffs Actually Get Made By HBO?

Bryan Cogman is developing a fifth Game of Thrones prequel series for HBO, Entertainment Weekly reported on Wednesday. It had previously been reported that HBO was developing four Game of Thrones spinoffs, but George R.R. Martin later revealed that a fifth one was also in the works, and that was made official today with Cogman’s hiring. So is HBO legitimately planning on airing five different shows set in the world of Westeros?

At the moment, that seems unlikely. An important point to note here is that none of these Game of Thrones spinoffs have actually been ordered by the network. All that’s happened is that HBO has five pilot scripts in development, and both HBO and George R.R. Martin have strongly suggested that not all five of them will actually get made.

Casey Bloys, HBO’s president of programming, told The Hollywood Reporter back in July that it’s “unlikely” that HBO would be aiming to have a Game of Thrones show on every quarter. Instead, they’re basically just looking for one that works, though he didn’t completely rule out the possibility of making more than one.

“My sense right now is we would be very lucky if one of the four rises to the level that we have set,” he said. “Now, theoretically, what if they’re all great? That’s a high-class problem that I’ll solve when it comes to that. But knowing what we know about the development process, that’s why we wanted to increase our odds. But I do not see a scenario where we have more than one. But again, high-class problem.”

Daenerys and her dragons in Game of Thrones l HBO

A lot of shows in early stages of development don’t end up going anywhere. But HBO really wants a Game of Thrones spinoff, so it sounds like they ordered five scripts to increase the odds of one of them working out, not because they want five spinoffs. The network won’t say that they definitely are’t going to make more than one, but it sounds like getting a single spinoff off the ground is the main goal.

After it was reported earlier this summer that HBO was working on four Game of Thrones spinoffs, George R.R. Martin took to his blog to clarify that it’s very unlikely that all of them will get on the air.

“Decades of experience in television and film have taught me that nothing is ever really certain…but I do think it’s very unlikely that we’ll be getting four (or five) series,” Martin wrote. “At least not immediately. What we do have here is an order for four — now five — pilot scripts. How many pilots will be filmed, and how many series might come out of that, remains to be seen. (If we do get five series on the air, I might have to change my name to Dick Direwolf).” 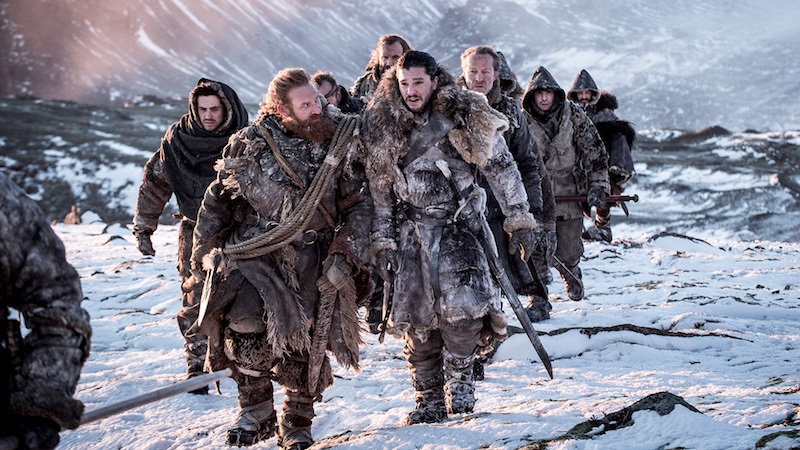 We don’t know a whole lot about the Game of Thrones spinoffs other than that they will all be prequels and won’t star any of the actors from the original show. They also won’t tell the story of Robert’s Rebellion, nor will they adapt Dunk & Egg. HBO’s Casey Bloys has said that no spinoff would air until at least a year after Game of Thrones ends, meaning we wouldn’t see one until 2020 at the earliest.