Will ‘Guardians of the Galaxy 2′ Add More Female Characters? 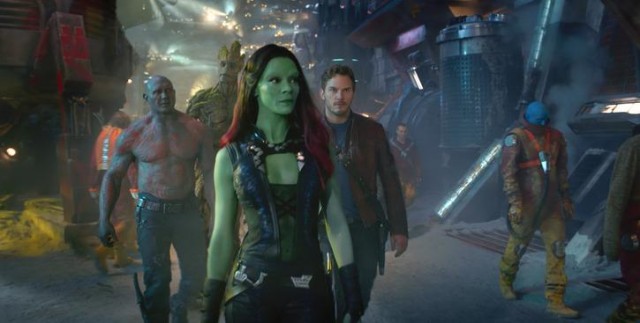 James Gunn’s Guardians of the Galaxy has only just been officially named the biggest movie of 2014, but already all eyes are on the upcoming sequel. Following the smashing commercial and critical success of the original, it seems moviegoers and reviewers alike are wondering if Guardians of the Galaxy 2 (which Marvel smartly preemptively greenlit back in July) will be able to live up to its predecessor. With anticipation for the follow-up flick only growing, Gunn recently revealed some more details regarding the upcoming sequel — specifically, the possibility of using the film as a vehicle to introduce new Marvel superheroes.

According to Collider, Gunn was attending DragonCon in Atlanta when he was asked whether there any plans to incorporate the current Captain Marvel, otherwise known as Carol Danvers, into the sequel. There’s been a lot of talk surrounding the character’s future in the Marvel Universe in recent weeks. Despite that, Gunn confirmed he wants to “steer clear” of adding any more humans to the franchise for the immediate future in order to keep Peter Quill (played by Chris Pratt) as the one and only “earthling” in the flick. Still, Gunn did hint that Danvers will likely pop up in another Marvel movie sooner rather than later. Most fans believe she’ll make an appearance either in next year’s Avengers: Age of Ultron or later on in Captain America 3.

Either way, she won’t be the only female character to join the Marvel ranks soon. While Gunn won’t be including Ms. Marvel in the upcoming Guardians sequel, that doesn’t mean he’s making his sphere of the Marvel universe male-dominated. Per Collider, the director added there were “plenty of other [alien] women” in the comic book mythos that he planned to introduce “as soon as he [can].” Now, fans are already speculating over which female characters he may be talking about.

It’s not a shocker that moviegoers are wondering about the possibility of more female superheroes in future Marvel flicks or that Gunn has already taken the notion into account. The studio has received plenty of backlash recently for its lack of female-driven movies. Though Black Widow (played by Scarlett Johansson) has gotten her fair share of screen time, the character has yet to get her own solo movie. Meanwhile, Elizabeth Olsen’s Scarlet Witch is also set to be introduced in the second Avengers flick out next year.

Still, there’s plenty of room for more female characters within the Marvel Universe. For its credit, Guardians of the Galaxy already has a strong base in that area. The first movie featured strong female characters Gamora (Zoe Saldana) and her sister Nebula (Karen Gillan), both of whom will be reprising their roles in the sequel. Now, the question is, who could be joining them?

Though Gunn didn’t reveal any more specific details on who exactly he’ll be bringing into the fold, there are a number of female characters in the Guardian comics that would make realistic additions to the sequel. So far, some fan picks include the likes of Martyr, the daughter of the original Captain Marvel; Moondragon, the daughter of Drax who survives Thanos’ fatal attack in the comics; and Angela, a character only recently integrated into the Guardians. Another favored choice is Mantis, a telepathic green-skinned alien who is skilled in martial arts and has a history with both the Avengers and the Guardians.

Regardless of which new female characters will be introduced in Guardians of the Galaxy 2, it’s clear audiences are eagerly looking forward to seeing what the movie has in store for them. The sequel hits theaters July 28, 2017.