You could write a novel about the reasons Grey’s Anatomy should be canceled, but just like the realistic NCIS, the show is going strong years after its debut. Also like NCIS, many actors on the show are bigger stars now than they were when Grey’s Anatomy started. That’s especially true of Sandra Oh and Ellen Pompeo, who worked together on the show for 10 years before Oh departed in 2017. Pompeo still plays Dr. Meredith Gray, and Oh moved on to the hit show Killing Eve, but is there a chance Oh reprises her Dr. Cristina Yang role anytime soon? This is what we know.

The Canadian actress was born in 1971 in Nepean, Ontario, Canada, which is now part of the nation’s capital city of Ottawa. She seemed destined to act from a young age. Oh attended the National Theatre School of Canada, and she had a breakout role in the 1994 TV movie The Diary of Evelyn Lau. She garnered a Cannes Film Festival award nomination for the part, according to Biography. 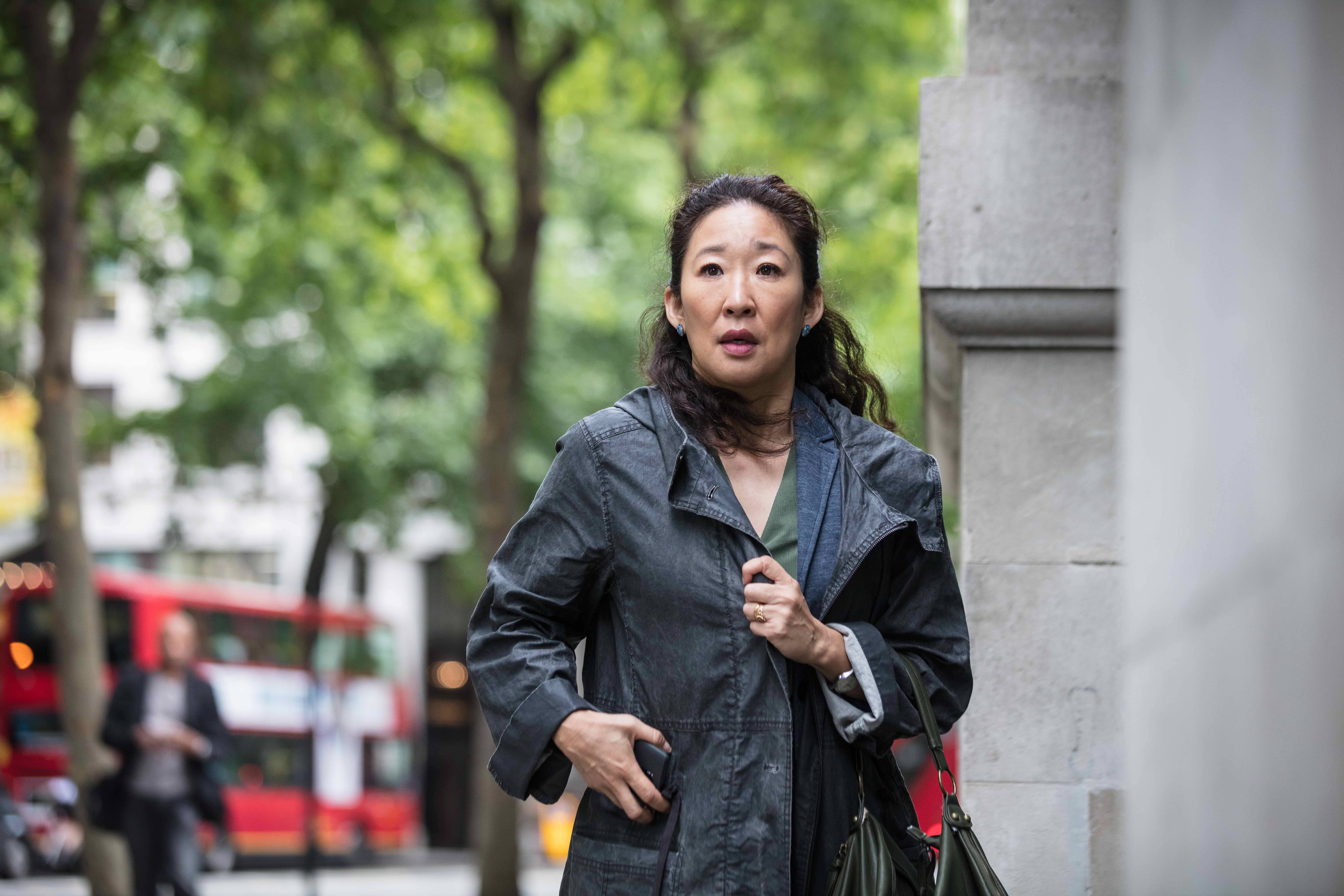 Oh landed a recurring role on the HBO show Arli$$ from 1996 to 2002. Then, she shared the screen with Mr. Bean actor Rowan Atkinson in the 1997 movie Bean. She started her run on Grey’s Anatomy in 2005 and departed in 2014. The reason she left the show stemmed from a desire to try new roles in new productions.

Sandra Oh didn’t have to wait too long to find success after leaving Grey’s Anatomy. Killing Eve was a hit right out of the gate, and fans are eagerly awaiting the Season 2 premiere. As for Oh walking onto the Grey’s set one more time, that’s up in the air.

Pompeo tells TVLine she would love to see Oh reprise the role so she can work with her again, but she’s also a Killing Eve fan who would miss seeing Oh in that role.

“Selfishly I would love to see Sandra Oh come back to Grey’s,” Pompeo said. “But I also love Killing Eve so much, and I love seeing her have so many of these incredible moments. So, as much as I love Sandra, I’d rather see her shine out on her own. I enjoy that more. That‘s more gratifying to me.” 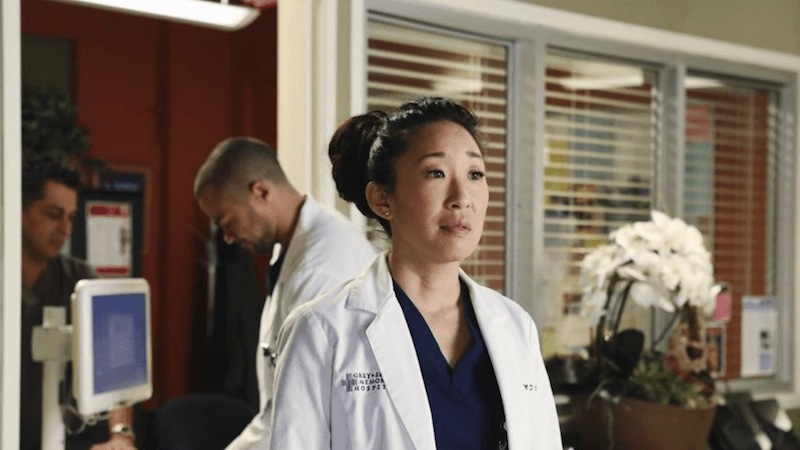 As for Oh, she once said she’d love to play Dr. Yang again, but her desire depends on the day, according to TVLine

“I get [the Grey’s] question regularly, and I answer it really based on what I’m feeling that day — and today [it] is no,” Oh said. “I love Eve. I really love her. I also love Cristina Yang.

“I’m constantly stunned at the response I still get from [Grey’s fans], you know? It’s so fantastic, and it pleases me. It gives me a tremendous amount of satisfaction that, you know, you did work that actually continues going on past the time that you’ve left it. It’s really phenomenal. And the only way that I think I can continue doing good work is just staying true to my own compass.

What is Oh’s net worth?

Even though she doesn’t have a fat Grey’s Anatomy paycheck to cash anymore (she earned $350,000 per episode at the end), Sandra Oh’s net worth isn’t suffering. However, hosting the 2019 Golden Globes didn’t help her bottom line very much. 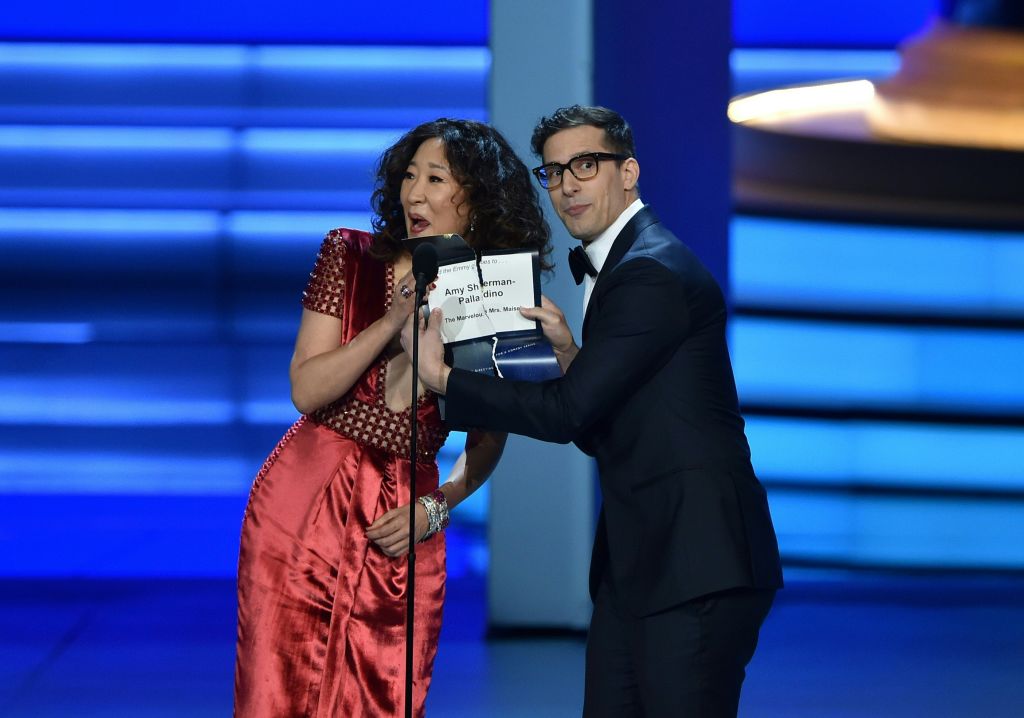 Sandra Oh and Andy Samberg during the Emmy Awards in 2018. | Robyn Beck/AFP/Getty Images

Even though it’s a high-profile work, the salaries for awards show hosts aren’t astronomical. Jimmy Kimmel earned roughly $15,000 for hosting the Academy Awards. Tony Awards host make less than $3,000. A rumor said former Golden Globes hosts Tina Fey and Amy Poehler made $4 million each for their efforts, but that number was probably 100 times higher than the actual figure.

We mentioned that Grey’s Anatomy payday, it helped boost Sandra Oh’s net worth to $25 million.