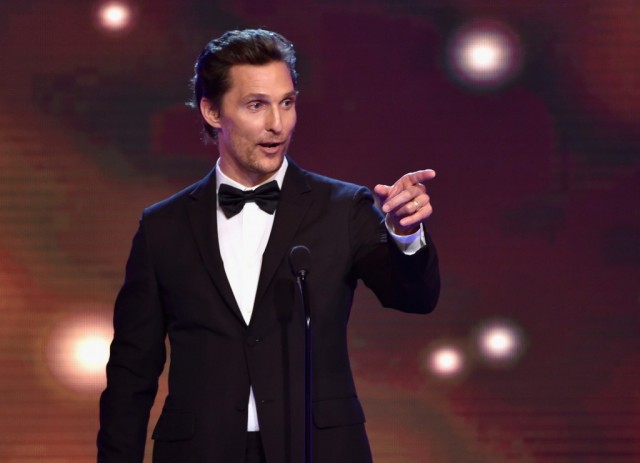 To say Matthew McConaughey is having a stellar year professionally is a drastic understatement. The 44-year-old actor earned critical acclaim after his award-worthy roles in both the biographical drama Dallas Buyers Club and HBO’s anthology series True Detective. His performance in the former earned him an Academy Award for Best Actor and after earning equally rave reviews for his turn in True Detective, it’s to no one’s surprise that McConaughey also recently received his first-ever Emmy nomination for Outstanding Lead Actor in a Drama Series.

True Detective stars McConaughey and Woody Harrelson as Rust Cohle and Martin Hart, two cops on the hunt for a serial killer in Louisiana across seventeen years. The crime drama gained attention for its overwhelmingly positive reception from reviewers, but also for breaking new ground in terms of its format. The first season wrapped back in March, completing an entire story arc in just eight episodes. A second season will air next year, starring all new actors and a completely different story line.

Critics have been predicting McConaughey’s nomination and even preemptively declaring him a favorite for the win since the show’s end, although there was some debate as to which category the series would best fit into. Now that the nominations have officially been announced though, his frontrunner status has only become clearer.

Case in point? Even Harrelson, who is competing against McConaughey in the same category, told The Wrap that he’d rather that his co-star win. “It’s flattering to be nominated,” Harrelson told The Wrap. “But I have to throw my vote to Matthew, who I thought delivered the best performance of his life. Which is saying something.”

Meanwhile, McConaughey also acknowledged Harrelson and the other actors I in the category in his reaction in the nomination. “I am honored to be nominated with such a talented field of actors,” he said in a statement to ABC News. “This is a tremendous category filled with some riveting performances. Thank you for this recognition.”

In addition to Harrelson, McConaughey is also going up against other highly lauded actors, including Bryan Cranston (Breaking Bad), Jeff Daniels (The Newsroom), Jon Hamm (Mad Men), and Kevin Spacey (House of Cards). Still, given McConaughey’s incredible award season run, it’s hard to think he’s not also a shoo-in for this win as well. Already, 10 out of 12 experts at the award-predicting site, GoldDerby, have chosen McConaughey as their pick for winner of the category. Cranston (who won the Emmy in this category for three consecutive years ending in 2010) is cited to be his strongest challenger, particularly as this would be the last chance for the Emmys to honor Cranston for his role as the meth-making chemistry teacher in the much-loved series.

If he does pull off a win though, McConaughey will have taken his already impressive year to new record-breaking levels. Should he take home the Emmy, he’ll become the first male to take home the Best Actor Oscar and an Emmy in the same year since George C. Scott won both in 1971 (although he famously tried to refuse the Academy Award). Several actresses, including Helen Hunt and Liza Minnelli, have performed the same feat with the Best Actress category in previous years.

The 65th Primetime Emmy Awards at Nokia Theater will air on NBC on Aug. 25.