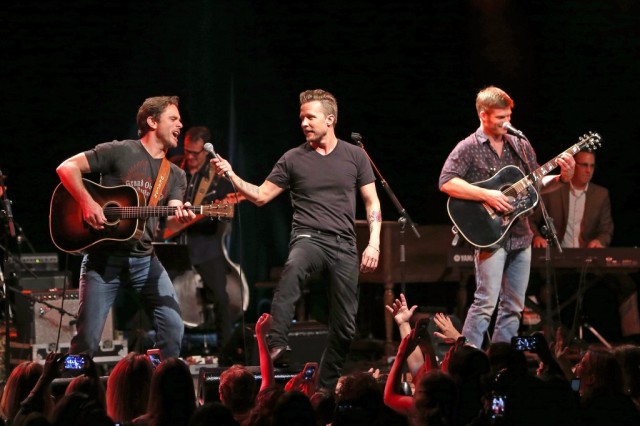 Fans of ABC’s Southern drama Nashville now have even more reason to watch the Season 3 premiere in September — and country music lovers in general may want to tune in, as well. The show, starring Hayden Panettiere and Connie Britton, recently announced that the premiere episode will actually feature live performances by some of the cast members from inside Music City.

According to ETOnline, the broadcast will switch back and forth between prerecorded scenes of the new episode and live performances that will take place in Nashville’s famous Bluebird Café. Almost all of the main actors on the widely musical ensemble cast sing on the show regularly, but — as real-life musicians know — going live is a whole other ballgame.

So which of the actors will step up to the plate for the live portion of the premiere? Chris Carmack, who plays gay country music singer Will Lexington, will reportedly sing “If It’s Love,” written by The Striking Matches. Charles Esten, known on the show as the struggling alcoholic and professional musician Deacon Claybourne, will perform a second song that he co-wrote with Deana Carter, called “I Know How To Love You Now.” Both the studio and the live versions of each song will then be available for purchase on iTunes that same night.

It’s not an entirely surprising move for a show that ended its last season with special concert episode recorded live at the Grand Ole Opry (called Nashville: On the Record), but it is an ambitious one. The premiere will mark the first time in history that a scripted drama TV series has attempted to also air a live musical performance.

As if pulling off live performances during a mostly pre-taped episode isn’t tricky enough in itself, the actors and producers are actually planning on doing it twice so that both East Coast and West Coast fans can enjoy seeing the actors sing live. Still, if any show can pull it off, it’s Nashville.

The cast boasts some genuinely great voices, including Esten and Carmack, the two actors going live. In fact, both previously toured with co-stars Jonathan Jackson, Sam Palladio, and Will Chase in three cities earlier this year. Now, Esten is on his own summer tour with another Nashville cast member, Clare Bowen. The show’s previously released soundtracks have also performed well, with all four albums landing in the top 10 on the iTunes country charts.

In addition to potentially proving skeptics of the show wrong, the live performances could generate some new buzz for the show’s premiere. The series has never brought in huge ratings for the network, but another dip in viewers last season, combined with decreased tax incentives in Tennessee, put the show on the verge of cancellation in early spring. After loud decries from the show’s loyal fan base, the network finally picked up the series for another season on May 9. Given this second chance, it’s clear producers are looking for new ways to boost interest by making use of one of the show’s biggest draws: its music.

But that’s not the only buzz-worthy factor the show has going for it this upcoming season. Fans have been speculating whether Panettiere’s pregnancy will be written into the series, following news that the actress is expecting her first baby. It seems likely, especially given that her character, Juliette Barnes, had an infidelity story line last season. Still, fans will have to stay tuned to find out for sure — and to see if live performances and an added plot twist will be enough to bring the show the viewers it’s been lacking the last few seasons.