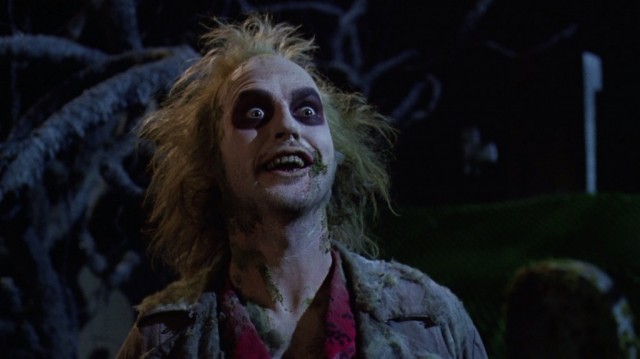 Tim Burton and Michael Keaton are both big awards contenders this year with Burton directing the biopic Big Eyes and Keaton considered a Best Actor frontrunner for his performance in Alejandro González Iñárritu‘s Birdman. With the hype surrounding both men, people haven’t forgotten their previous collaborations that kicked off both of their careers in the late 1980s and early 1990s with Burton’s take on the Batman franchise and the cult classic Beetlejuice.

Keaton has been vocal for years that he’d be willing to do a sequel to Beetlejuice. He said in October that he and Burton were waiting for a script to the sequel to be completed and that he’s in if Burton’s in.

In a new interview with MTV News, Burton has said that a long-awaited sequel to Beetlejuice is finally coming and at least two members of the iconic film’s original cast will return. In addition to Keaton, Burton responded with a resounding nine “yeah”s when asked whether Winona Ryder would also be coming back for number two. The director said that directing Ryder in a recent music video for rock band The Killers helped reunite the pair so that they could work together on a movie again.

“I worked with [Ryder], I hadn’t seen her in awhile … and she was so great,” Burton said. “I was so happy to see her. So those kinds of elements mean something to me. Michael and her … and that character, I just miss it, there’s some freedom about that character that I love.”

Ryder also starred in Burton’s Edward Scissorhands shortly after Beetlejuice, and the director’s films were an important part of the actress’s early career. Ryder is the only one of the trio not currently in a bit of a career resurgence. After going through some tumult in her personal life during the early 2000s, the actress has more or less stayed out of the spotlight. She did have a small role in the 2010 Oscar-winning thriller Black Swan, in which she played an aging ballerina that Natalie Portman’s character replaces. That haunting part gained a lot of positive notices, but Ryder still has stayed away from big starring roles.

Ryder was just 17 years old when she was cast in Beetlejuice and it was the film that started her career. Beetlejuice was also important for both Burton and Keaton. It was the follow-up to Burton’s directorial debut Pee-wee’s Big Adventure and it went further with establishing Burton’s signature creepy aesthetic. The film provided Keaton with his first major starring role as the “bio-exorcist” Betelgeuse who is hired to help a ghost couple rid their house of a living family. Keaton was able to make the character seem exactly the right amount of menacing, scary enough to warrant some unease but silly enough to laugh at, and received raves for his performance.

Whether or not a sequel will be as successful as the first film is uncertain. Big Eyes is the first film Burton has made in a long while to get positive critical attention. Keaton had been relatively under the radar until Birdman and Ryder hasn’t had a major role in a movie since 2006’s A Scanner Darkly. If Big Eyes signals a return to form for Burton, then Beetlejuice 2 could be a creepy, funny treat like the original. If he decides to go bombastic, over-the-top, big-budget like Alice in Wonderland and other of his more recent endeavors, it might not do the original justice.