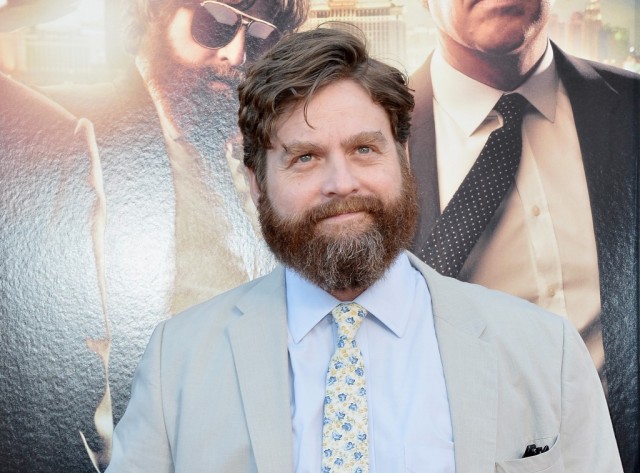 Zach Galifianakis is officially returning to the small screen. The Hangover star has teamed up with fellow funnyman Louis C.K. to develop a new FX comedy show, called Baskets. On Wednesday, the network confirmed it ordered ten episodes of the upcoming half-hour series.

Though it was first revealed that the formidable comedy duo was working on a TV show back in January, no other specific details regarding the series were released until now. The pilot episode was co-written by Galifianakis, C.K. (Louie), and Jonathan Krisel (Portlandia, Man Seeking Woman). Krisel also directed the pilot and serves as showrunner. Per Deadline, Baskets is the first project under FX Productions’ overall deal with C.K. and his production company Pig Newton. The show chronicles the story of Chip Baskets (Galifianakis), as he sets out to pursue his dreams of becoming a well-respected clown. The official synopsis from the network reads:

In a world constrained by corporate interests and the homogenization of society, one man in Bakersfield, California dares to follow his dream of becoming a professional clown. But after an unsuccessful enrollment at a prestigious clowning school in Paris, the only job he can find is with the local rodeo. Baskets follows Chip Baskets’ (Galifianakis) pursuit of his dream, against all odds, to be a respected clown.

In case seeing Galifianakis as a clown isn’t enough of a draw, the promise of an award-winning trio like this one teaming up on anything should be more than enough to peak viewers’ interest in the series. All three of the show creators have earned high recognition and critical acclaim for their past and current work.

In fact, the announcement of the new series comes right on the heels of C.K.’s Emmy Award win earlier this week for comedy writing on his self-titled FX show. Galifianakis and his team also won a Creative Arts Emmy earlier this month in the short-format live-action entertainment category for his interview with President Barack Obama on his much-buzzed-about web series, Between Two Ferns. Meanwhile, Krisel is also an Emmy-nominated writer and director for his work on Portlandia.

Given their experience, it seems likely Baskets is destined to become a new small screen favorite. After all, if anyone can be counted on to deliver a hit comedy show, these three seem like a safe bet. But perhaps an even more telling sign of the show’s potential is the network’s obvious confidence in the project. “Zach Galifianakis, Louis C.K. and Jonathan Krisel have created an absolutely brilliant show,” said Eric Schrier, president of original programming for FX Networks. “To say Zach’s portrayal of the lead character Chip Baskets is hilarious/unique/riveting/fascinating would be an understatement. We can’t wait for the world to meet him.”

It seems like much of the rest of the world can’t wait either. News of Baskets is already generating buzz in the media and among fans eager to see what laugh-’til-you-cry material Galifianakis and C.K. have come up with together. Unfortunately, it’ll be a while before we can actually see the show on the small screen. Production on the series is slated to begin next year, with the series set to premiere sometime in 2016.