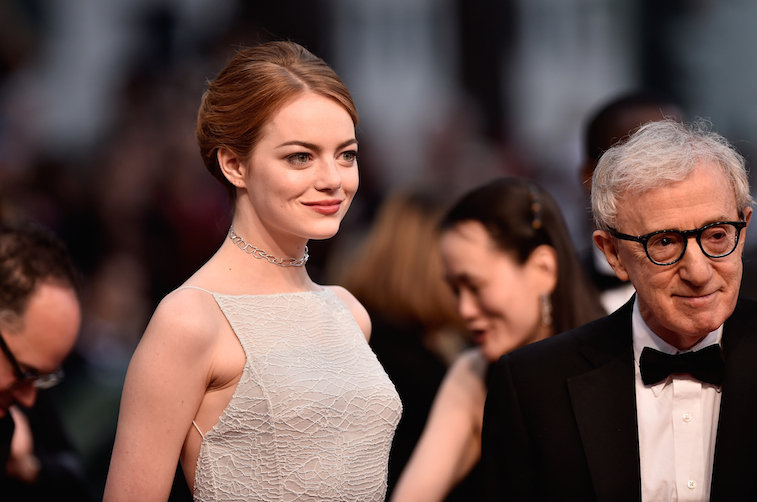 Legendary director Woody Allen’s late career has largely been a hit-and-miss affair. Much ink has been spilled on the fact that for every Vicky Cristina Barcelona or Midnight in Paris there’s a To Rome With Love or Magic in the Moonlight. Unfortunately the news out of Cannes is suggesting that the latest movie from the auteur Irrational Man is another misfire and Allen has said himself that his upcoming collaboration with Amazon Prime for a TV show will be potentially disastrous.

Irrational Man stars the latest Allen muse Emma Stone as a college undergrad who falls for her bad boy philosophy professor played by Joaquin Phoenix. Professor Abe Lucas is the hottest thing that’s happened to the sleepy fictional campus of Braylin College in Newport, Rhode Island in years, and all the women seem to take notice. Despite his initial hesitance and impotence brought on by an existential crisis, Lucas predictably begins an affair with his bright and hot young student. All this is complicated by an Allen-esque murder mystery that was perfected in Crimes and Misdemeanors. Critics are heartily warning fans of the director not to go in expecting Crimes and Misdemeanors or even the entertaining 2005 drama Match Point, which introduced Scarlett Johansson as his new muse.

“Because depressingly, this is a Woody Allen film and no mistake: the tepid murder plot, the college professor/student relationship, the constant references to Kant and Heidegger and Dostoyevsky, the central character struggling to find meaning while women inexplicably fling themselves at him — these are all as familiar to us as the Windsor EF Elongated typeface he invariably sets his credits in,” said a scathing review from IndieWire.

Other reviews out of Cannes have been pretty lukewarm as well, often comparing the movie to last year’s flop Magic in the Moonlight. That romantic comedy stars Emma Stone and Colin Firth and has a 51% rating on Rotten Tomatoes, as critics heaped in it with Allen’s recent misfires. “To say it’s a better film than Moonlight may be a compliment,” said HitFlix of Irrational Man, “but we won’t pretend it’s not a backhanded one.”

While Emma Stone is most definitely a great actress — anyone who’s seen Birdman knows that — she seems to be either failing as an Allen muse or just happens to have latched on to his bandwagon during a creative dull period. She looks beautiful in his films with her saucer eyes, but the two of his trifles she’s been in haven’t served her in the least. Working with Allen is an actor’s dream — as occasionally his movies become what Vicky Cristina Barcelona was for Penélope Cruz or Blue Jasmine was for Cate Blanchett, earning both women Oscars — but the partnership between Stone and Allen hasn’t been nearly as successful.

In addition, during a press conference at Cannes Allen expressed reservations about his recently inked deal with streaming service Amazon Prime for his first ever television show. This was a pretty big deal when it was announced, as lots of different television channels and services have been trying to lure big-name directors to TV during what critics say is television’s golden era. “It was a catastrophic mistake for me,” Allen said, in his typical way where it’s hard to tell whether he’s kidding, per The New York Times. “You do a movie, it’s a big long thing, but to do six half-hours, I thought it would be a cinch,” he said. “It’s very, very hard. I hope I don’t disappoint Amazon.”

Almost nothing is known so far about the planned show, aside from the fact that it will debut on Prime Instant Video next year. Plot details and casting are being kept completely secret. It seems that Allen is just being self-deprecating in his comments, but given the past couple films he’s released, it’s worth wondering whether the show will fall into what IndieWire referred to as the category of “Woody Allen dramedy misfire,” especially given the difficulties he says he’s having with the format.

Allen is already lining up an all-star cast for his next movie, which will include Jesse Eisenberg, Kristen Stewart, Blake Lively, and Bruce Willis. Hopefully that film will give fans more of a return to form and less of a disappointment.