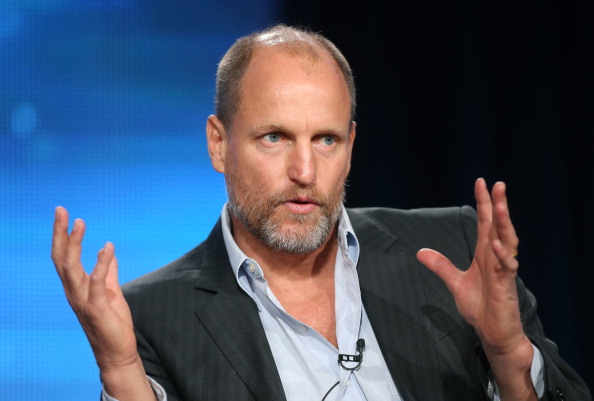 At the Emmys this year, Woody Harrelson will compete against co-star Matthew McConaughey for outstanding lead actor in a drama series for their shared job leading HBO’s True Detective, a new anthology series from an unknown writer, Nick Pizzolatto, and director, Cary Fukunaga, that became the most critically acclaimed television show of the year. The series follows two Louisiana police detectives as they attempt to catch a serial killer who has run rampant in rural Louisiana for years committing heinous, ritualistic murders of women and children. Bouncing back and forth between 1995 and the present day, the show looks at what has happened to the characters in those intervening years as they separated and the case went unsolved.

Harrelson gave a wonderful performance as the straight-laced, by-the-books Det. Marty Hart, but part of the beauty of the role was his ability let Matthew McConaughey’s Rust Cohle take center stage. Rust was always going to be the most interesting character: that was how Pizzolatto had envisioned it. Hart is there to (attempt to) ground Cohle in reality, give Cohle someone to believe in his weird theories, and later provide Cohle with companionship to stop him from spinning off into nothing on his own crazy energy. Without Marty, Cohle couldn’t have accomplished what he did, but without Cohle, there would have been no TV show.

Pizzolatto told HitFlix that the idea for the series came from a monologue he’d written in Cohle’s voice: “And I was writing longhand in a moleskin, and Cohle’s voice started coming out right away. … And he described some things, and was instantly describing these existential and metaphysical concerns that completely captivated me. I found that notebook a couple of months ago, and I was looking through it, and some of those very first things I wrote down, almost three years later made their way into Matthew’s mouth.”

Harrelson and McConaughey are competing against each other in the Outstanding Actor in a Drama Series category, but McConaughey is a shoo-in for the award. His performance as the tortured philosophical genius Rustin Cohle is considered to be the best of his career, and he just won an Oscar last year for Dallas Buyers’ Club. Even Harrelson is rooting for him. “It’s flattering to be nominated,” Harrelson said in a statement to The Wrap. “But I have to throw my vote to Matthew, who I thought delivered the best performance of his life. Which is saying something.”

That doesn’t mean that Harrelson doesn’t deserve the nomination. Almost anyone would have been overshadowed by McConaughey’s tour de force performance as Cohle. Harrelson himself created an incredibly complex character who professes to having old-fashioned morals, ones he finds superior to many newer and more liberal ideals, but he can’t quite stick to being the family man that he thinks he is. Marty is crushed by crippling guilt when he repeatedly falls short of the high standards he sets for himself and his wife and two daughters. He believes himself to be superior to Rust, who he sees at first as a godless weirdo, but Rust manages to remain true to his strict moral code while Marty repeatedly fails. The show is at its heart about Rust and Marty’s relationship, not a crazed serial killer in Louisiana.

True Detective is an anthology series, so there are some more seasons coming up from HBO (exactly how many is uncertain), but the story line will be completely different and the stars are currently unknown. The question as to who’s going to lead the next season of the critically lauded show has provided some of the most heated rumors in the entertainment world in recent months outside of the Marvel or Star Wars franchises.

Other upcoming projects from Harrelson include the Hunger Games franchise, in which he plays Hunger Games champion and mentor to hero Katniss, Haymitch Abernathy, with the final two installments of Mockingjay in the works. Harrelson is currently filming the crime drama Triple Nine about a group of corrupt police officers trying to pull off a risky heist. That film co-stars Kate Winslet and Aaron Paul. Films in the works for Harrelson include the drama By Way of Helena with Liam Neeson, about a Texas ranger investigating deaths in a small town and the star-filled action comedy Now You See Me 2.

Harrelson is hardly unfamiliar with television, having gotten his start on the long-running sitcom Cheers, for which he won an Emmy for Supporting Actor in a Comedy Series in 1989.

In fact, if McConaughey really has any competition in the drama actor category, it’s going to come from Bryan Cranston in Breaking Bad. This is Emmy voters’ final opportunity to honor the beloved series about a meth-making high school chemistry teacher, as the show wrapped earlier this year, and they may take the opportunity to do just that rather than give the award to the hot new thing.