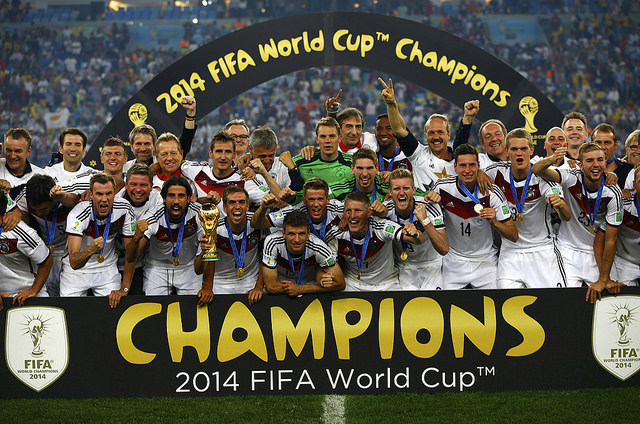 There’s been a lot of talk the past couple of weeks about America’s growing interest in soccer and whether what we were seeing was in fact evidence of a shift in sports culture in the United States. But in what has been the biggest indication yet that soccer is indeed on the rise, the 2014 World Cup final set the U.S. TV record for the event with an estimated 26.5 million people tuning in to watch Germany’s extra-time win over Argentina on Sunday.

Guglielmino also noted what many others around the country had experienced: Soccer for the first time felt like a cultural event. Old fans and new fans often crowded bars, restaurants, and park events to watch and cheer on tournament games even when the U.S. national team was not involved. There’s also strong evidence that the soccer fervor experience this summer will translate to added interest in either the MLS or European soccer leagues like the English Premiere League now that the tournament is over.

Of course, the World Cup ratings in the U.S. were still nothing compared to the rest of the world even if they represented evidence of the changing tide. In Germany for example, 34.65 million peopled tuned in to watch the German national team face-off with Argentina — the highest-ever numbers for viewership on German television. But soccer’s expanding popularity means that it’s one of the few sports in America that has a tremendously high ceiling with massive room for expansion.

But how does the World Cup final’s 26.5 million compare to the other biggest sports event in the U.S.? Not very well as you might expect, although the numbers might be surprising. Least surprising is what ends up at the top of the list: the Super Bowl. The 2014 Super Bowl — Super Bowl XLVIII — narrowly edged out the 2013 Super Bowl to become the most-watched television event in U.S. history with 111.5 million viewers.

However, when the NFL is taken out of the picture, the World Cup’s TV ratings actually eclipse the most recent NBA finals and the MLB World Series. For the NBA finals between the San Antonio Spurs and the Miami Heat, game five displayed the biggest numbers across the board with 17.9 million total viewers; for the 2013 MLB World Series, total viewers topped out at 19.2 million for game six between the Boston Red Sox and St. Louis Cardinals.

Of course, given that the World Cup only occurs every four years and has a worldwide pull, it’s important to put that in perspective. But there’s no doubt that soccer is on its way up in a country that has historically dismissed the sport. Soccer is definitely here to stay.