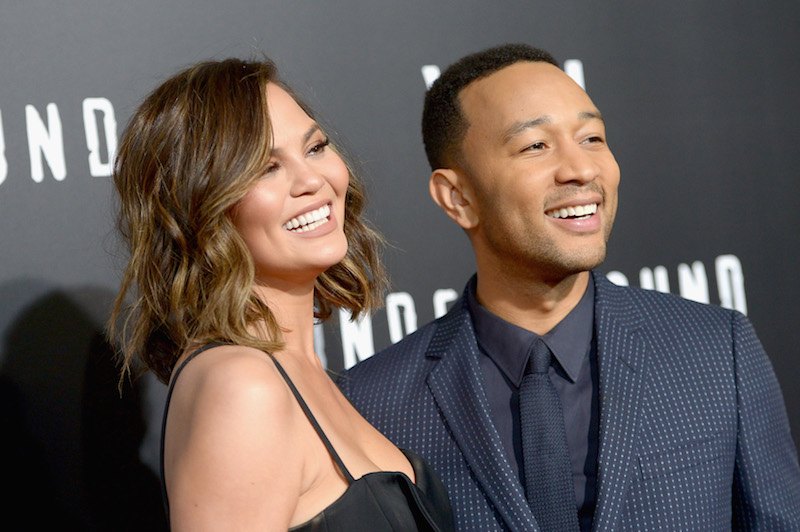 Supermodel, chef, and TV personality Chrissy Teigen has been with her singer/producer husband John Legend for an entire decade. That means, in Hollywood years, the duo has been together for about a century. The Cravings author has always been vocal about her relationship — she once even referenced the time they had sexcapades at an Obama campaign event (much to Legend’s embarrassment).

Still, despite everything, the couple has also faced some trying times  together. From rumors of infidelity to struggles with infertility and, most recently, Teigen’s battle with postpartum depression, it hasn’t always been smooth sailing. However, Teigen, who loves to troll her hubby on social media, says she wouldn’t have anyone else by her side.

She told Us Weekly, “I try to deprecate him because he’s so perfect. I got very, very lucky.” The Sports Illustrated model went on to say, “I don’t know who else could put up with all the s–t we are constantly dealing with. Kids, friends, and work are hard, but John is the easiest part of everything.”

Apart their delightful banter and Legend being actual human perfection, there is another major reason why Teigen won’t ever divorce her husband. Here’s what the model has said about refusing to split from Legend.

The queen of social media has been an open book about her struggles with infertility and post-partum depression. Despite it all, she’s super excited to have more babies. The couple was finally able to conceive through IVF, and this go-round, they’re more prepared for what to expect.

They have frozen boy embryos ready to be harvested, and Legend has been vocal about saying they’ll be ready to try for baby number two “soon.” Teigen added, “How would I not want to expand my family with this beautiful person? He’s just everything.”

Who else would be Legend’s muse?

“All of Me” didn’t simply fall out of thin air, people — and Teigen would like us all to remember that.

When the “Love Me Now” singer was nominated for two Grammy back in 2014, the body positive activist tweeted, “2 grammy noms for @johnlegend no one has congratulated me for being the inspiration behind “all of me.” Without me there is no all of me.”

The Lip Sync Battle co-host had no qualms about tweeting, “I know he has a beautiful voice and I know I am ‘soooooo lucky’ and blah blah but john’s vocal warmups make me want to stab my brain.”

Perhaps their next home should have soundproof walls.

Who else would be bothered to travel with Legend on tour?

Tours seem so glamorous and iconic, but the FABLife alum has always been quick to expose the reality of life on the road.

She once tweeted, “Touring life with John is basically him resting his voice and never speaking and me saying ‘are you mad at me’ every 45 minutes.” Sounds like the actual worst. Bless Teigen.

Stepmoms are just not an option

Teigen and Legend’s 16-month-old daughter Luna is obviously better than all of us — and she’s also the major reason why Tegien won’t ever be meeting with a divorce lawyer.

The 31-year-old jokingly told Us Weekly, “I told [John] the number one reason we are not getting divorced is because I refuse to see another woman with my baby.” Honestly, fair.

Seeing another woman with her gorgeous child isn’t the only reason Teigen has no plans to divorce. She’s also said she’d never leave Legend because it would be way too time-consuming and exhausting.

Teigen once replied to a fan who asked her about divorcing her hubby by tweeting, “Too lazy. Hate paperwork.”

In a recent interview with The Guardian, Legend recalled a time early on in their relationship when he tried to end things with his model wife. He said, “I was really stressed and busy. I was just like, ‘I’d just be happier single right now,’ and she was like, ‘No.’”

Teigen relayed her version of the events on Twitter, saying, “It wasn’t a typical breakup. He was on tour and his voice hurt and he was being a whiny face about everything and so yeah, I was like ‘no.’”

Who else is going to troll Legend on Twitter?

Teigen once trolled Legend by responding to his tweet, saying, “Oh so you can tweet but not text.”

Who else is going to dance to Beyoncé with Teigen?

If your hubby is also a Bey stan, then what more do you even need in life?

Even in death, the New York Times best-seller has a plan that won’t allow her husband to remarry. She tweeted, “I always have a note in my pocket that says ‘john did it’ just in case I’m murdered because I don’t want him to remarry #truelove #tips.”

Teigen is a true icon.

Do you know what to-day is #itsouranniversary ❤️

If you look this fly on datenight, there really is no reason to even consider breaking up.