10 Times the Fashion Industry Got a Little Political

Though it’s usually frowned upon to discuss politics, it feels like your Instagram, Facebook, and in-person conversations are all plagued with emotional commentary from every side of the political spectrum these days. And there’s one group of people who has never shied away from speaking their minds: the fashion industry. Whether they express their views in a collection, endorsement, or interview, industry heavyweights are adding something to the conversation. Below, 10 of the most memorable moments. 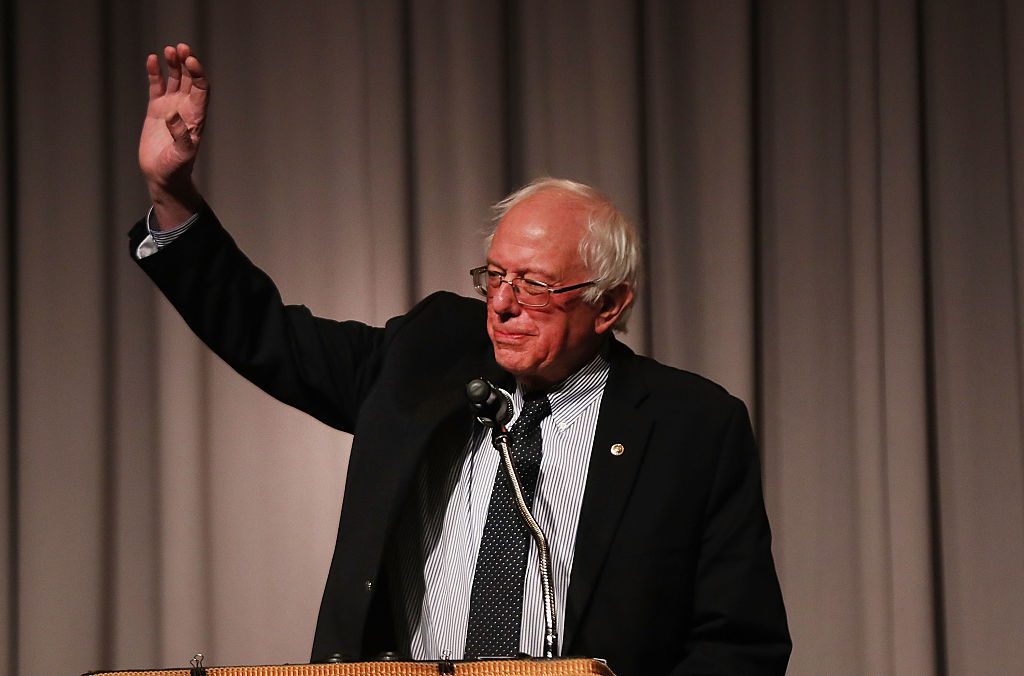 Even though the Vermont senator wasn’t nominated as the Democratic presidential candidate, Bernie Sanders was probably one of the most popular hopefuls of the entire White House race. From Sanders making an edited appearance in Seinfeld to the masses still flaunting his bumper stickers and flags, it seems like everyone is still feeling the Bern. And yes, the fandom has made its way to the runway, too.

At the most recent Balenciaga menswear show, designer Demna Gvasalia unveiled a collection of oversized suits and outdoor apparel — think fleeces and puffer vests — adorned with a cheeky iteration of Sanders’s logo. When asked about his status as a fashion icon, Sanders humbly replied, “I think of my many attributes, being a great dresser or a fashion maven is not one of them.” 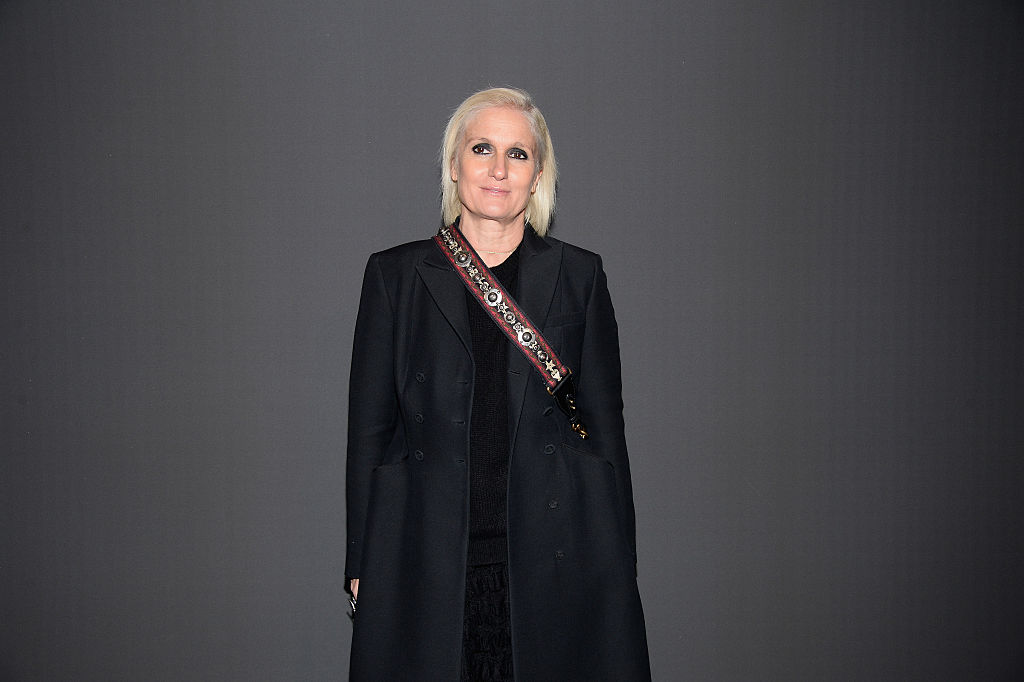 Last year, former Valentino designer Maria Grazia Chiuri became the first-ever female creative director of Christian Dior. Though her inaugural collection of ethereal gowns and equestrian separates received rave reviews, it was the feminist T-shirts sprinkled throughout the collection that went viral. “We Should all be Feminists” sounds like a sign you would’ve seen at the women’s march, but you saw it at Dior first.

While we can only imagine her own career triumph played a hand in these shirts, they offered the same feminist sentiment that was celebrated through Hillary Clinton’s campaign and beyond. 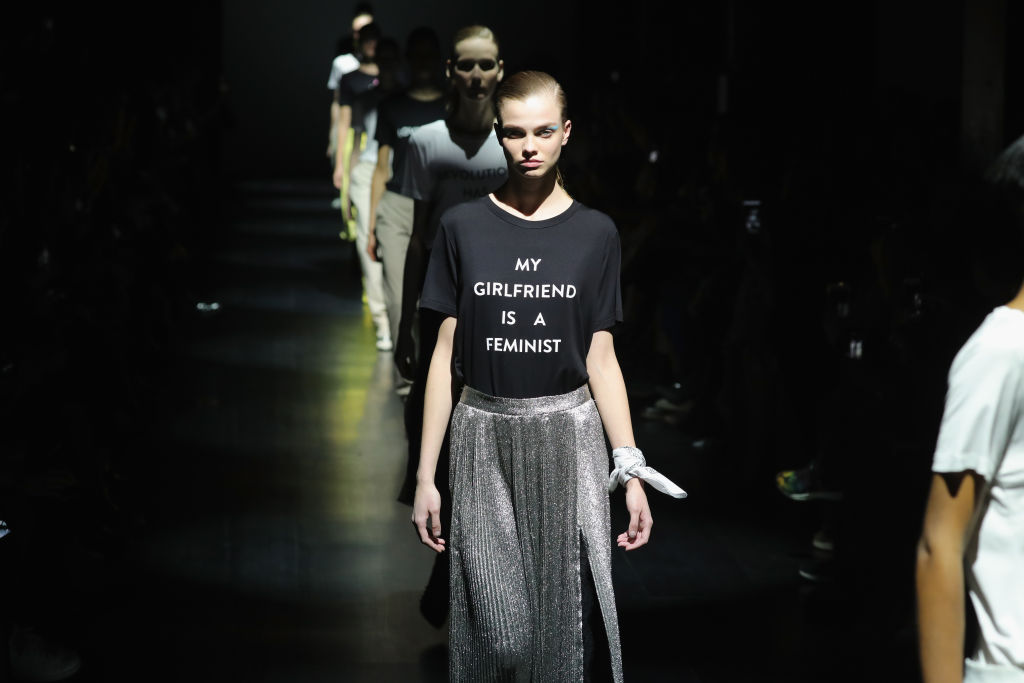 A lot of celebrities and designers aren’t afraid to tweet their frustrations, triumphs, and innermost thoughts; however, Business of Fashion’s white bandana movement just goes to show you can take a stand without saying anything. Shortly after the recent refugee ban the publication launched a movement to “make a clear statement in support of human unity and inclusiveness amidst growing uncertainty and a dangerous narrative peddling division.” Anyone who wants to join the movement simply incorporates a white bandana into their outfits. 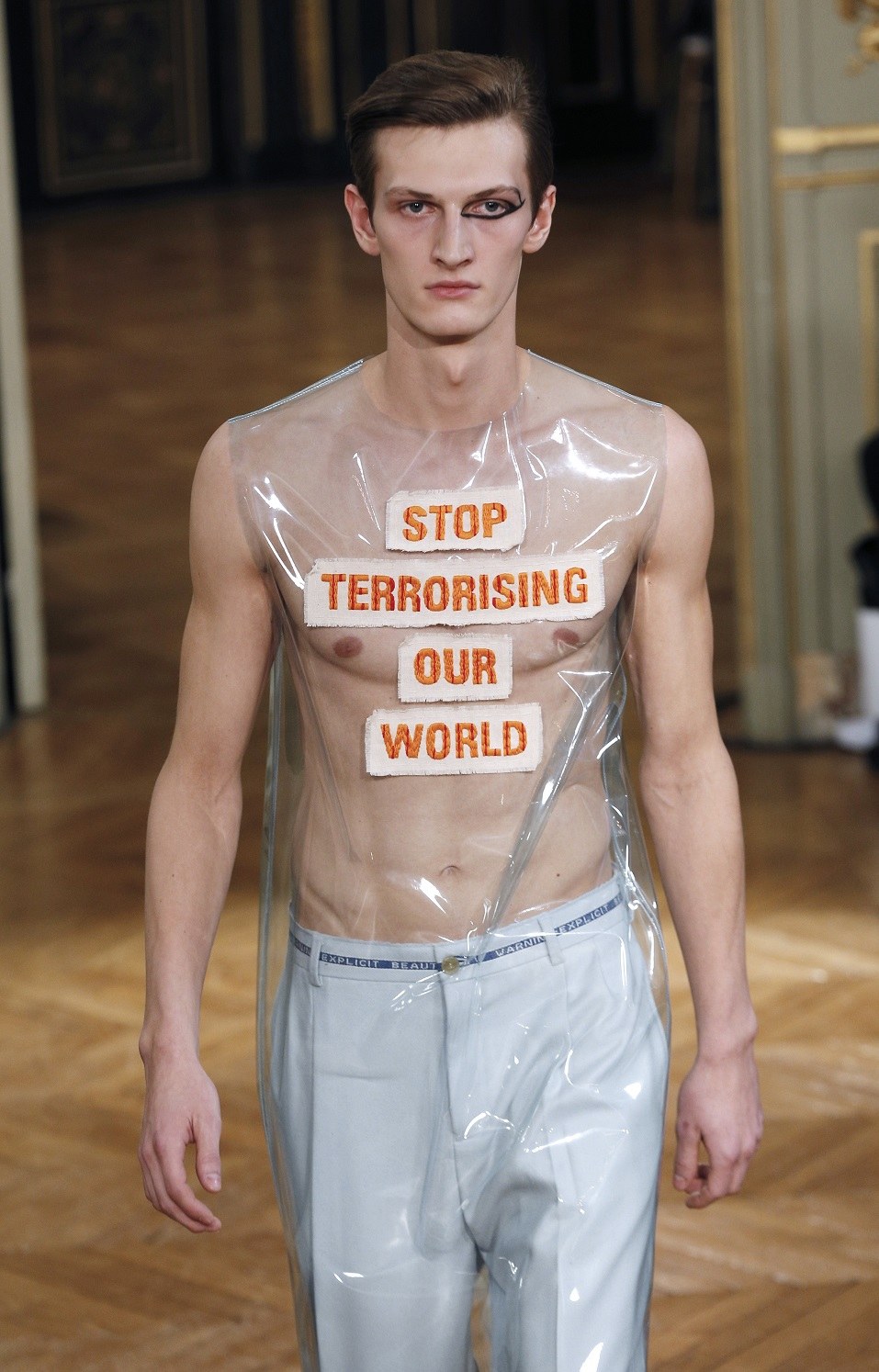 Though the recent election sparked several sartorial statements, designers have been using their platform to voice their beliefs long before we even heard the phrase “make America great again.” Take menswear designer Walter Van Beirendonck, for example. The Belgian designer is known for his unconventional looks, and he actually sent transparent tops with phrases like “Stop Terrorising Our World” and “Warning Explicit Beauty” down the runway at his fall 2015 show.

Since his show debuted shortly after the Charlie Hebdo attacks in Paris, many believe the collection was directly influenced by the tragedy. Whatever the inspiration was, we’re happy Van Beirendonck’s collection emphasized world peace. 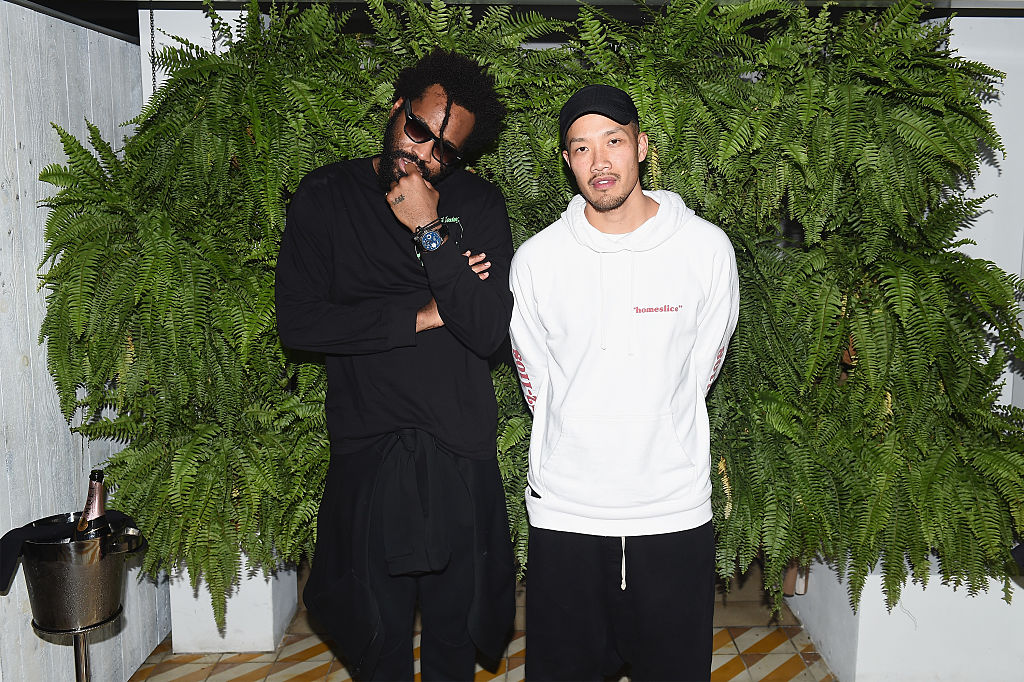 Public School has been one of the most anticipated shows of New York Fashion Week. | Nicholas Hunt/Getty Images

Less than 10 years since its inception, Public School has already become one of the most anticipated shows of New York Fashion Week. In addition to winning several awards and partnering up with brands like J.Crew and Fitbit, the design duo Dao-Yi Chow and Maxwell Osborne have even gone on to design for DKNY.

6. Hillary Clinton’s ‘Made for History’ project 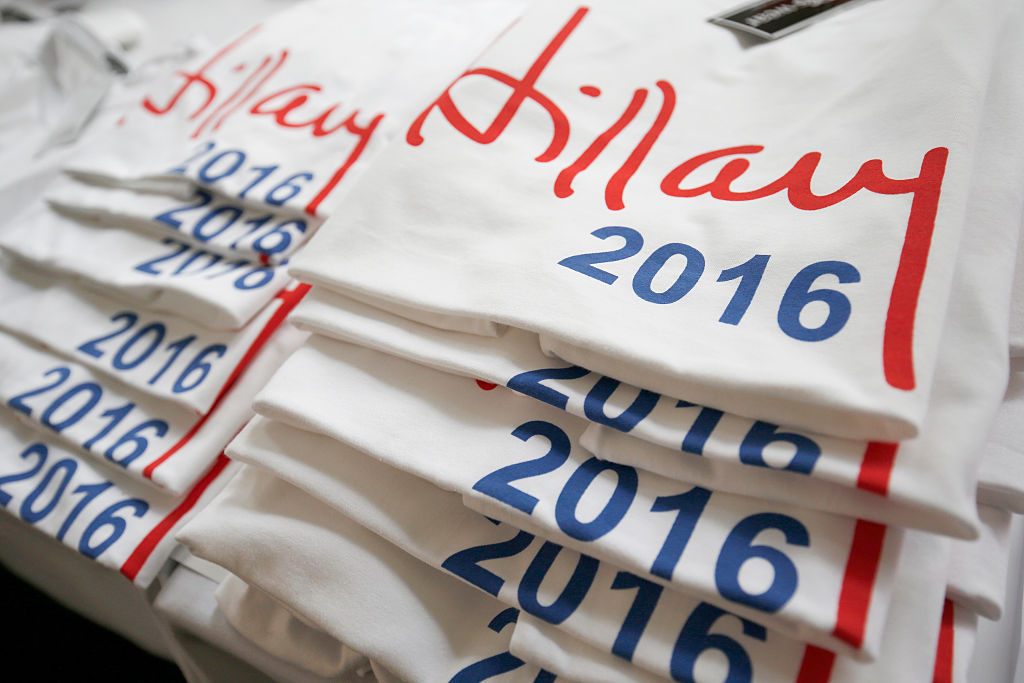 As a presidential candidate, it’s rare to have your campaign merchandise crafted by top tier designers, but Hillary Clinton is not your ordinary candidate. In 2016, Vogue reports, she launched the Made for History collection, where designers like Diane von Furstenberg, Marc Jacobs, and Tory Burch created merchandise for the presidential hopeful. As expected, each shirt boasted classic Clinton quotes and optimistic notes for her campaign. If this isn’t an unofficial endorsement, we really don’t know what is.

7. Supermodels take a stand against fur 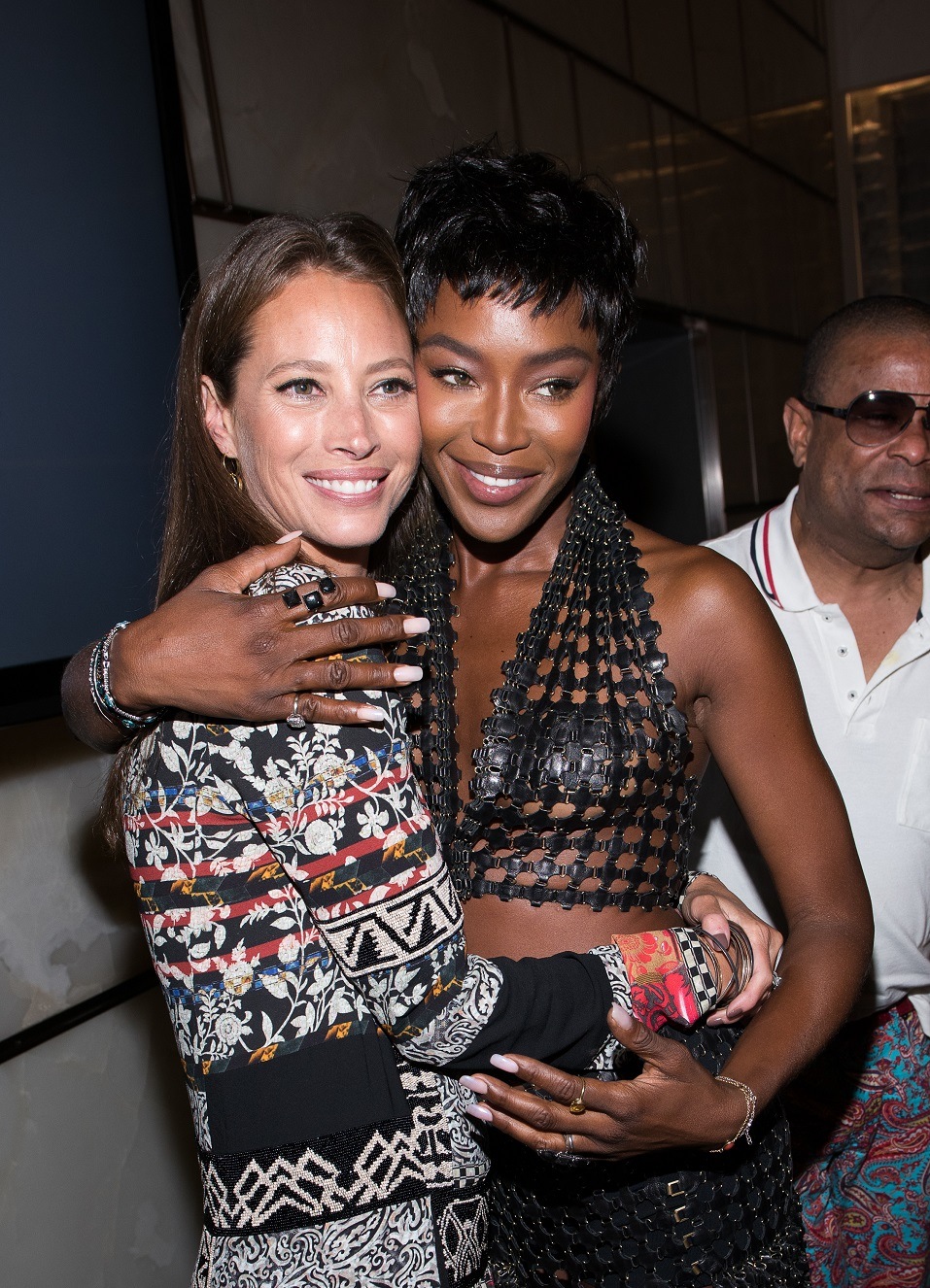 From what feels like the beginning of time, PETA (or People for the Treatment of Ethical Animals) and the fashion industry have butted heads — doesn’t anyone remember that scene from the film Sex and the City? Though so many designers have begun to use vegan materials, it hasn’t always been that way.

In an effort to raise awareness about animal cruelty, PETA started the campaign “I’d Rather Go Naked Than Wear Fur,” where notable celebrities would strip down to their skivvies to promote the cause. While the organization has worked with everyone from Khloé Kardashian to Olivia Munn, perhaps its biggest endorsement was from the 1990s supermodels. Christy Turlington Burns had her own spread and Naomi Campbell also posed for an ad alongside several other of-the-moment models. Let this be a lesson that models can have just as much influence as the designers. 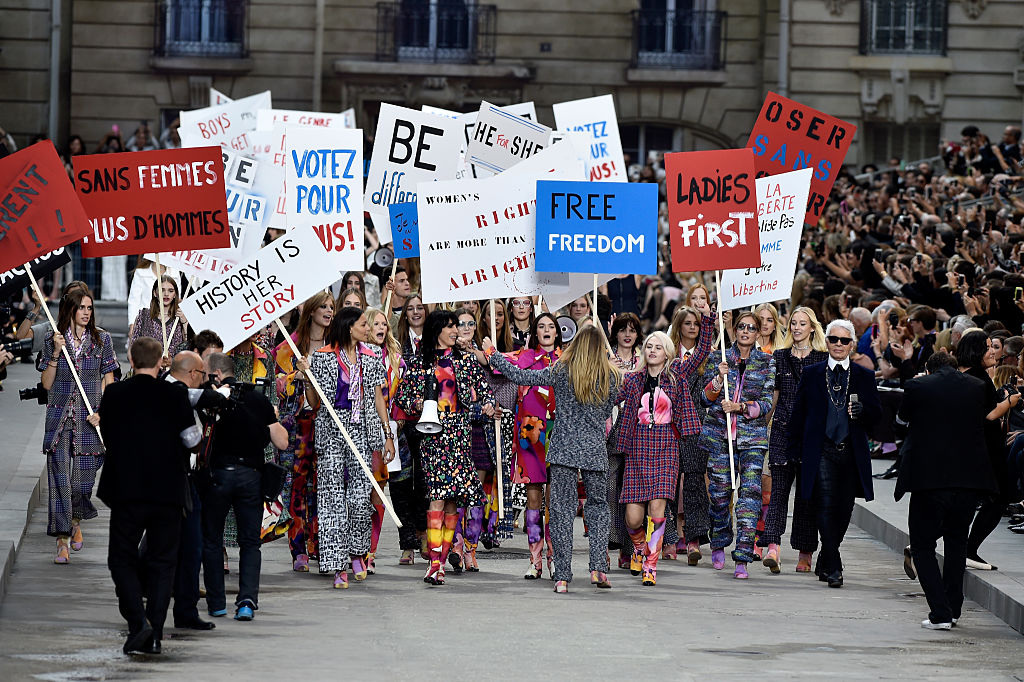 It’s no surprise feminism is a big part of the fashion industry. | Pascal Le Segretain/Getty Images

Karl Lagerfeld is never afraid to get a little inventive. As the creative director of Chanel and Fendi, every collection he designs is full of exquisite designs and an over-the-top set. For his spring 2015 collection, the runway show wrapped with a swarm of models — including Cara Delevingne and Gisele Bündchen — carrying feminist protest signs. It’s no surprise that the industry — especially the womenswear sector — believes in feminism, but it was a pleasant surprise to see so much girl power on the catwalk. Not to mention, this moment ran rampant on Instagram.

Spotting anti-Trump underwear down the runway? Now that’s unexpected and exactly what LRS designer Raul Solis did at his most recent presentation. Regardless of your political perspective, you have to admit it’s a cheeky way to take a stance.

10. The industry stands with Planned Parenthood 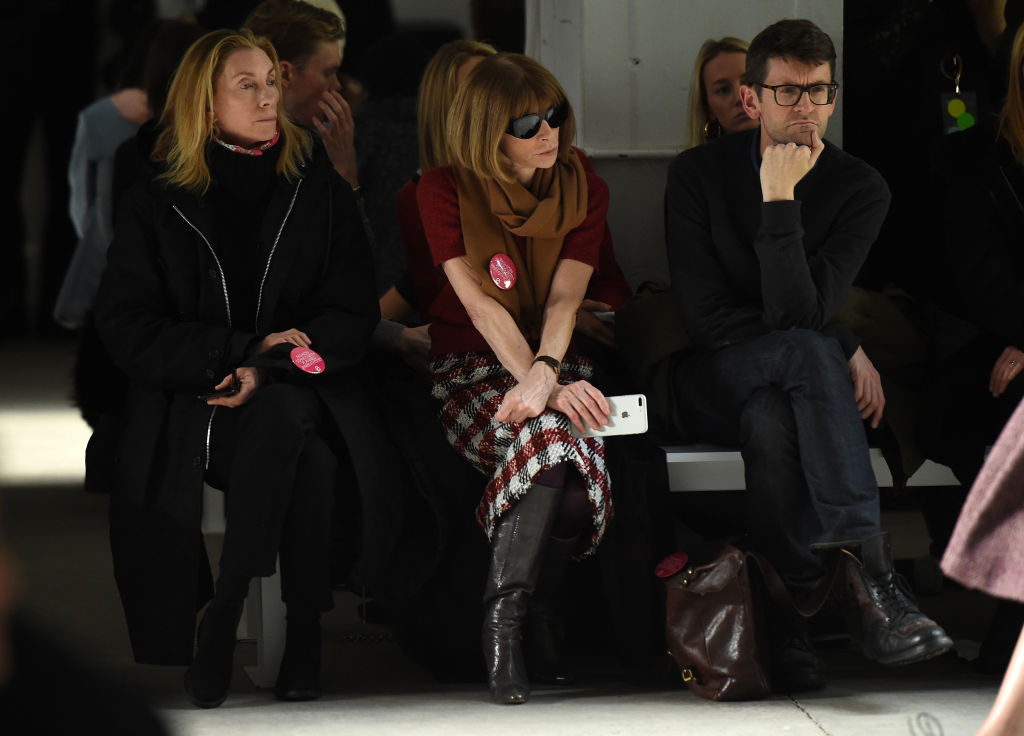 Each fashion show’s audience is chock-full of celebrities, industry insiders, and Instagram-famous editors, so eyes are on the front row just as much as the catwalk. If you’ve been keeping track of the most recent shows, you might notice some of fashion’s most famous influencers have been sporting pink buttons. Look closer and you’ll see they all read “Fashion Stands with Planned Parenthood.” With Planned Parenthood’s future uncertain, many people are using high-profile events to show their support for the company. And if Vogue editor-in-chief Anna Wintour is doing it, you know this trend and level of activism is here to stay.