For an awards show that celebrates outlandish style and creativity, last night’s Grammy Awards skewed rather tame. There were boring black suits after boring black suits, and let’s not forget Pharrell’s casual ripped jeans outfit. However, thanks to the latest crop of fashion-forward musicians, the night wasn’t a total wardrobe bust. Missed last night’s soiree? Check out our best dressed guys from the 2016 Grammy Awards. 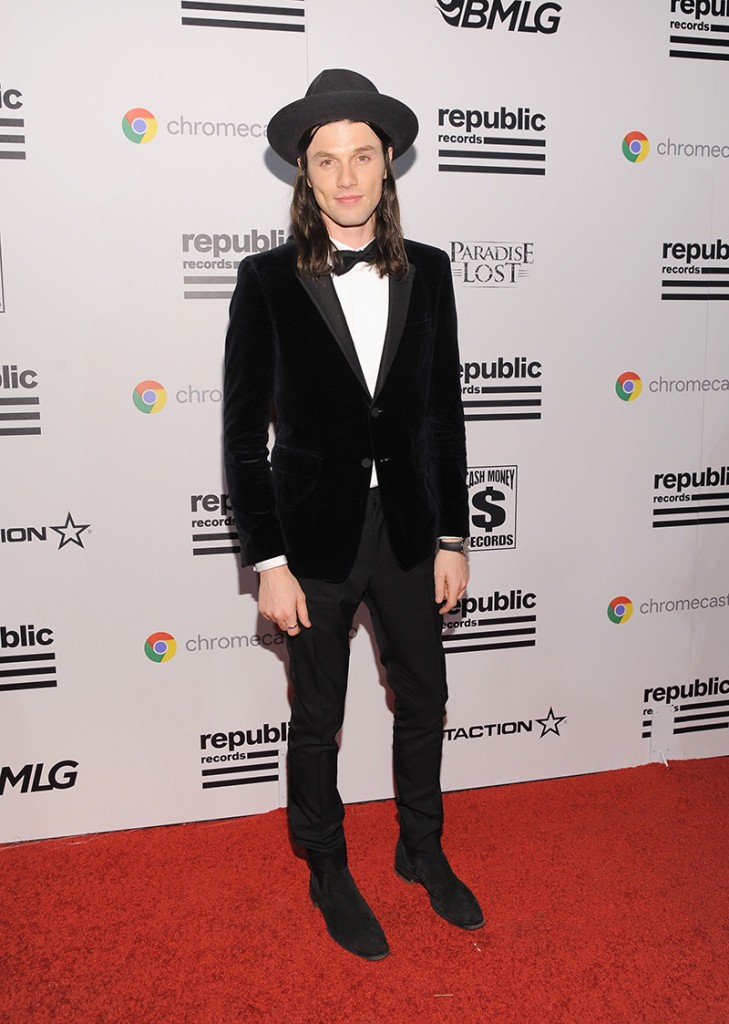 Sporting a wide-brimmed topper in any scenario can be hit or miss because you can easily look like you’re trying too hard. But with his long hair and partially-buttoned suit jacket, “Best New Artist” nominee James Bay is the perfect blend of relaxed and red carpet ready. But the fashion kudos go far beyond the choice to wear his signature hat: The tuxedo is equally covetable. Not only is Bay’s tuxedo jacket in a lush velvet, the songster’s pants are perfectly tailored without looking too tight. As a perfect finishing touch, Bay accessorized with textured Chelsea boots instead of conservative brogues. The look may have been a little tame, but who cares when it’s so well done? 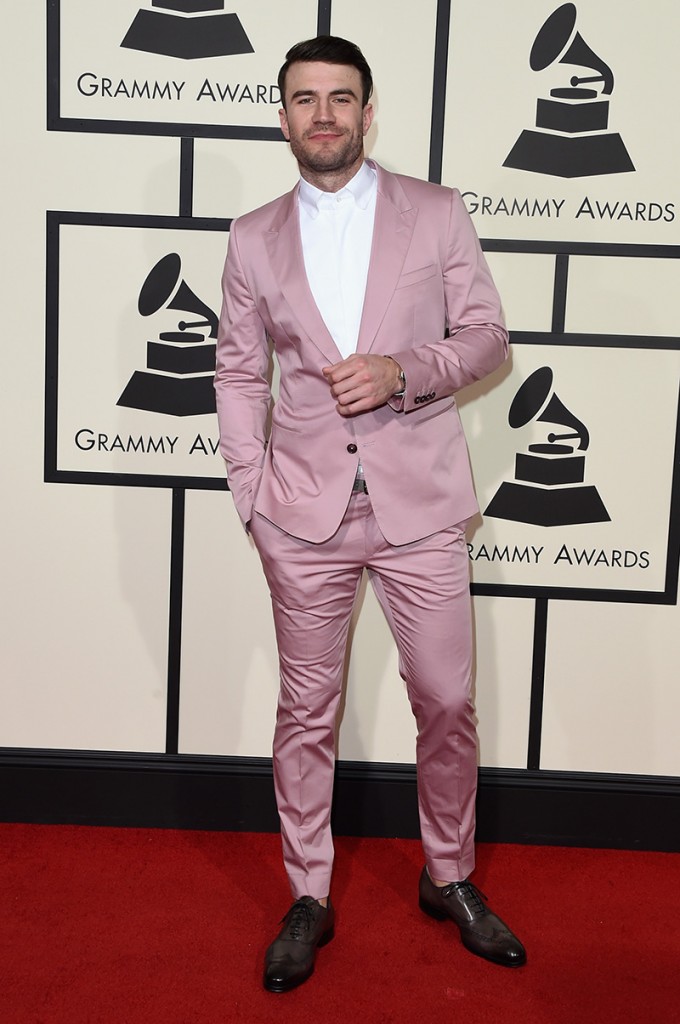 They say real men wear pink, so Sam Hunt must be the manliest of them all, right? It takes a lot of guts to steer away from the familiarity of a black suit, let alone opting for a feminine rose hue. Paired with brown brogues and a buttoned-up white shirt, the 6-foot-4 country singer looks completely at ease in such a statement-making suit. One thing we’d change about this outfit? The belt. While that skinny grey band sticks out instead of tying the outfit together, we have to give him props for taking such a fashion risk. 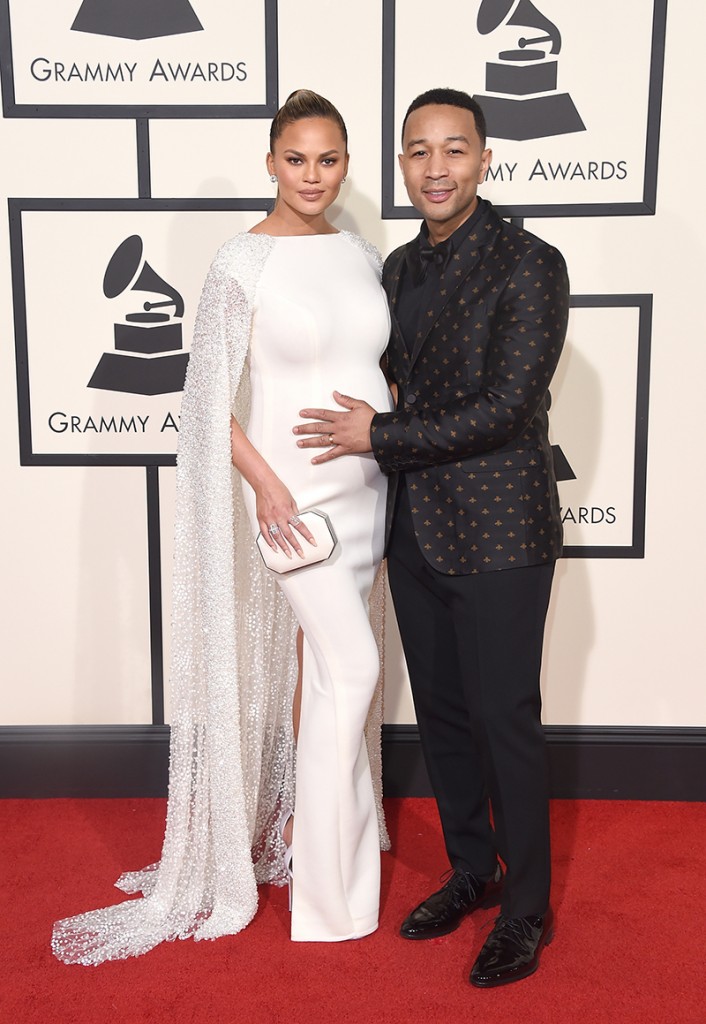 If this red carpet had its own slew of high school-esque superlatives, we’d give John Legend the award for best use of prints. Most of the time, a patterned suit can be too flashy and not translate well on the red carpet. At this year’s Grammys, Legend smartly paired a very subtle print with a pair of black pants. A jolt of energy in a sea of basic suits, this mix is eye-catching enough to make a statement but doesn’t teeter on tacky. And even next to a very pregnant Chrissy Teigen, who was sporting a cape-clad Yousef Al-Jasmi dress, Legend looked fashion-forward separately or coupled up. 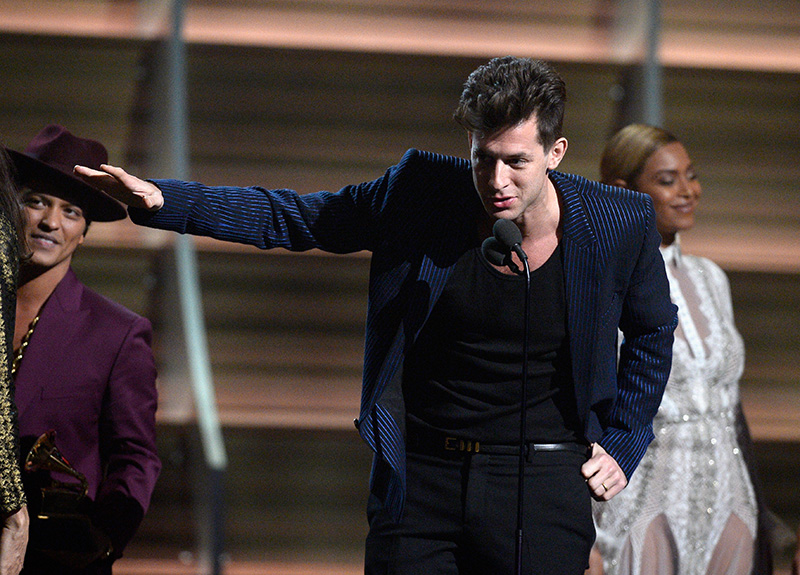 Gents, take note: Not all high-profile events require an average button-down shirt. Take Mark Ronson, king of cool and part of the genius team behind “Uptown Funk,” who aced the Grammys red carpet. Like John Legend’s printed number, Ronson played mix and match with a striped blazer and black trousers. While the blue and black jacket provided an extra pop to his ensemble, throwing a relaxed T-shirt and pair of wayfarers into the mix kept this outfit ridiculously cool. 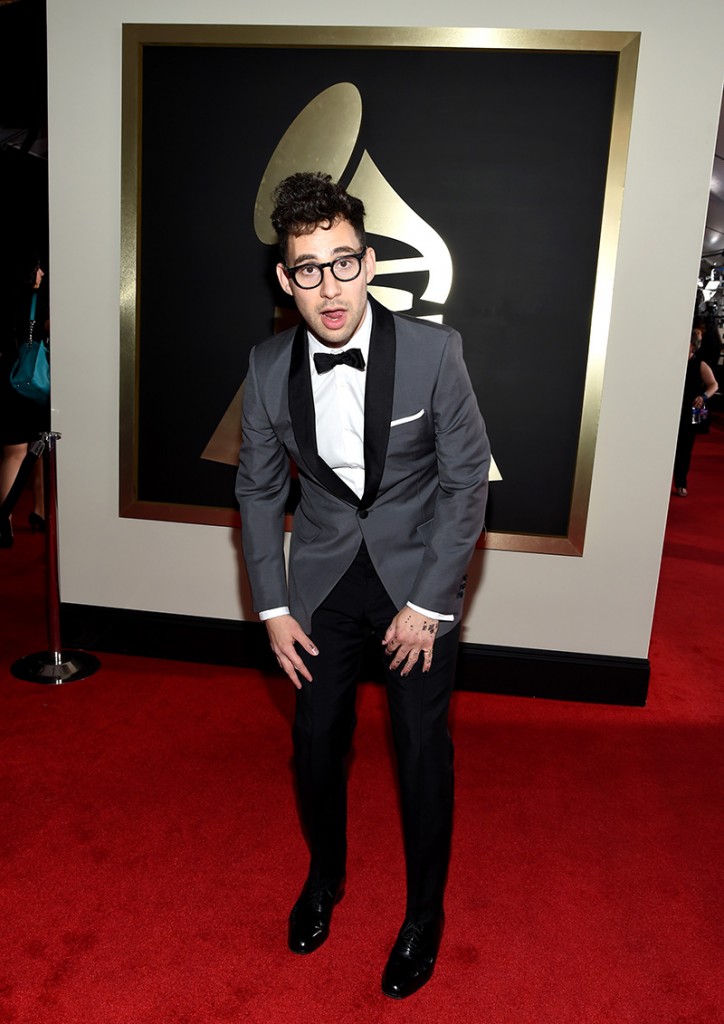 There’s a happy medium between wearing a black suit, like most guys on the red carpet, and a rosy suit a la Sam Hunt. Enter Jack Antonoff, band member of Fun, Bleachers, and the guy who played alongside Taylor Swift for the evening’s opening number. Antonoff sported a cool grey blazer with black lapels to last night’s event. Paired with grey pants, a matching blazer would be nothing special. But combined with black pants, the blazer really pops in a way that’s totally sophisticated. Lastly, the thick-rimmed glasses and slim pocket square add a cool, smart touch. 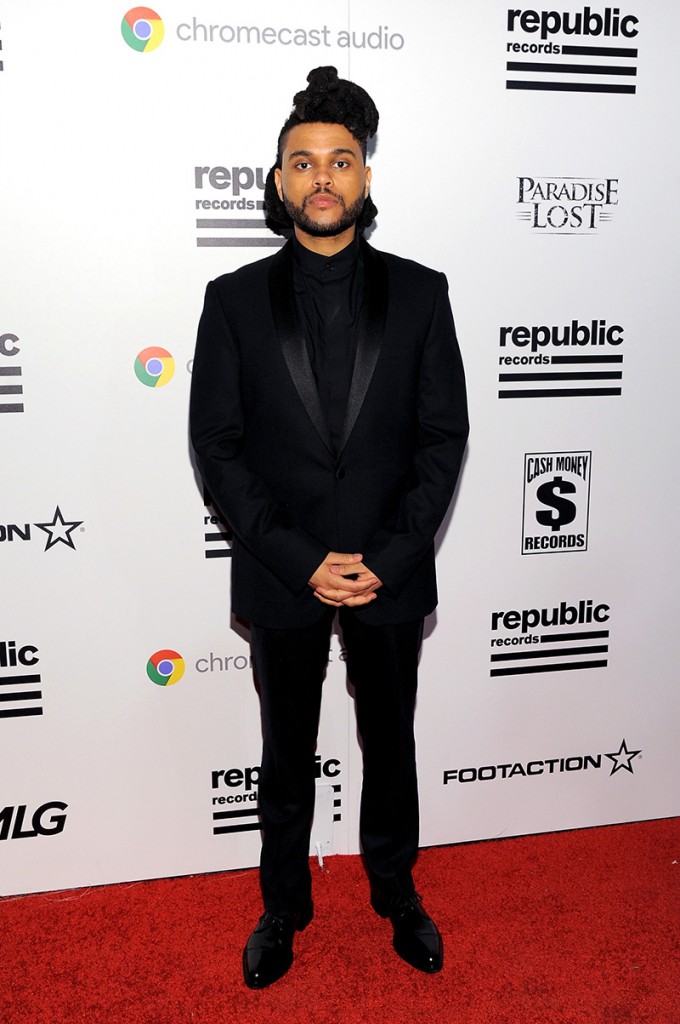 As a general rule, basic black suits on the red carpet are totally boring. But if you’re stuck with a noir tuxedo, one way to up the sartorial ante is by adding a black shirt. It sounds simple, but the results are extremely striking, and worth it. Take the Weeknd, for example, who boasted an all-dark getup to the 2016 Grammy Awards. Paired with a perfectly coiffed topknot, the hit singer looked more cool instead of average. And we suppose that having Bella Hadid on his arm didn’t hurt, either.