3 Ways to Wear a Scarf in the Summer

The scarf has been nothing short of a power player in recent menswear seasons, with the accessory getting top billing on many a runway. Last fall was awash in a sea of super-long, ultra-chunky versions that were wrapped all around many a model. These scarves not only made a statement but also proved their might in shielding against the cold.

But what’s one to do come the balmier months? Enter the summer scarf.

No longer do necks need to go naked. An extra layer of fabric tied round your neck during warmer days may sound extra-unappealing. But have no fear. This accessory is lightweight enough to keep you from losing your cool in the height of summer, plus it has a distinctly handsome European twist. And, for anyone living in climates where a slight chill pervades the air after dark, this little addition to your ensemble will not only prove fashionable but also functional, as well.

The Spring/Summer 2016 men’s runways featured no shortage of warm-weather scarves demonstrating that they are just as versatile as their winter cousins — perfectly suited to a day at the office or an off-duty vacations.

They’re an affordable way to refresh your wardrobe and completely change the look of a previously worn ensemble. So, make this the summer of the scarf with this quick guide to how you can tie one on — no coat required. Consider it your spring awakening. 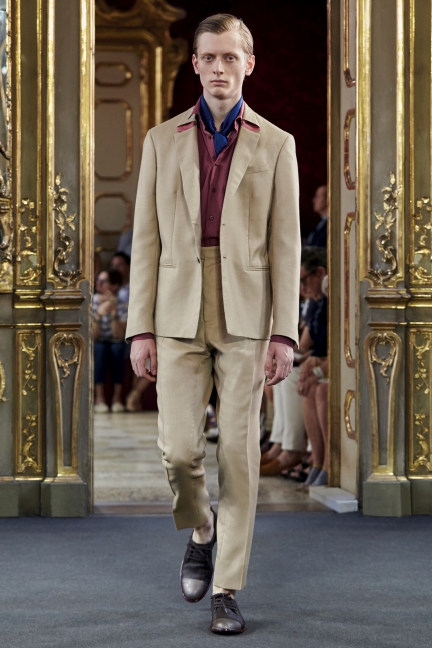 For a look that simply oozes with nonchalant cool, there is no easier way to achieve than with a thin, short scarf tied into a basic loop knot. The Corneliani Spring/Summer 2016 runway was awash in a number of scarves, where basically every look received an added flush of color and texture thanks to a lightweight scarf. A neutral suit, such as this Corneliani rendition, immediately gets a boost with a deep sapphire scarf that will keep your nine-to-five daywear out of dull territory.

If you’re not so much into coloring outside the lines with Crayola hues, Varvatos also offered a monochromatic moment with a tonal summer scarf. We cannot think of a better way to walk on the darker side than with these shades of gray and black.

Taken a step further, the basic loop can easily be transformed into a closer fitting neckerchief. An extra-thin scarf or a bandanna sets itself up perfectly for this look. Just tightly roll the fabric, wrap it around your neck, and knot it in the front. Although it can have a bit of a safari-esque, outdoorsman connotation a la Ernest Hemingway, this foolproof style can be worn as easily on an off-road adventure as it can in the urban jungle. 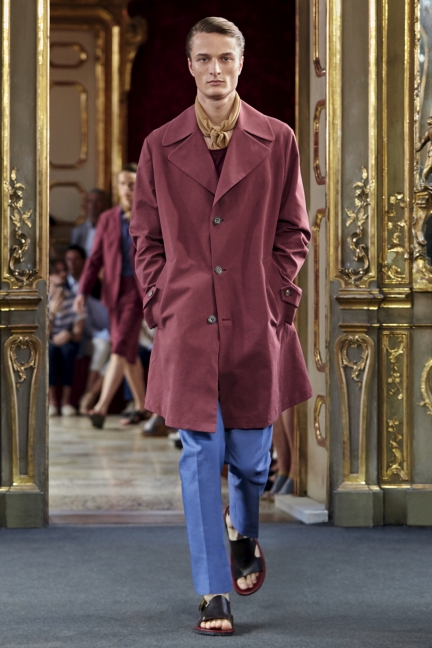 Corneliani offered this look with many a T-shirt, trouser, and sandal combo. Here, a nude-hued version accessorizes a light summer overcoat for a completely no-muss and no-fuss approach to street style.

The Hermes Spring/Summer 2016 runway also had plenty of neckerchiefs on display. The mood is laid-back yet still pulled-together with a patterned scarf adding a pop of visual interest to a lightweight polo shirt and trousers. 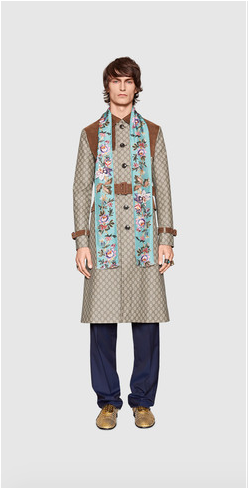 While the basic knot and the neckerchief are more common summer styles, well-suited for shorter, narrower scarves, there is a way to wear a long scarf after winter. The best styles will be super-lightweight fabrics that simply loop around the neck and shoulders and hang in front. Here, there is little-to-no neck coverage; you’re really adding an exclamation point to your outfit. For that reason, longer summer scarves are often more adventurous when it comes to prints and colors.

An even bolder contrast came courtesy of Gucci’s spring offering with a bold, floral scarf paired with a summer trench in a contrasting print. The juxtaposition between the patterns and colors is really what takes this ensemble to the next level, so you’ll be looking hot without breaking a sweat.